Above: Gallente Federation Stargate from Intaki to Amygnon

Intaki, Placid – The Gallente Federation has completed construction of a new stargate in the Intaki system that connects the territory newly-liberated from militia warfare with the high-security Amygnon system deep in the Gallente region of Verge Vendor. The Federation Navy has also completed and opened a new station in orbit of Intaki Prime.

To accompany these changes, the Federation government has formally registered a system security status change from 0.1 to 0.2, and formally registered for navigation purposes the fifth planet of the system as "Intaki V (Intaki Prime)". Federation security officials have indicated they intend to continue working to raise the security status of the Intaki system and President Celes Aguard's government has officially declared that the low security of the Intaki people's home system is a "federal emergency" that requires continued direct intervention.

Intaki autonomy activists and a significant minority of Intaki Assembly members continue to protest the ongoing presence of Federation military and security forces in the system, and particularly on Intaki Prime. There has been considerable disquiet on the planet over the presence of Federation Intelligence Office internal security forces and a number of "counter-terrorism" and "anti-sabotage" operations by Federal Marine units.

Intaki and Gallente politicians and protesters in the wider Federation also remain vocal in their opposition to the state of emergency and military presence in Intaki system, focusing their ire on what they claim are breaches of the Federation constitution and treaties with the Intaki. Senator Suvio Bellaron, representing the Federal sub-district covering the city of Lenoika on Intaki Prime, has continued to be vocal in his opposition to the Intaki system policies of President Aguard's administration, though his stance has been met with some scepticism due to his history of "central interventionist" politics in social and economic policy.

Senator Faron Shu, a long-time foe of Bellaron representing the Jin-Mei home planet of Chandeille in Lirsautton system, was notably acerbic in comments on the apparent shift: "The whole Federal Senate knows that Bellaron is an opportunist whose ambition is only matched by his appetite for imposing his world-view on others. We now see clearly that Bellaron is happy to stamp his cultural values on anyone who isn't Intaki, but is not so keen when it comes to his grip on his political power base on Intaki Prime being threatened by the sensible security policy of President Aguard."

Above: Caldari Navy Anchorage station in orbit of UM-Q7F IX

UM-Q7F, Syndicate – Caldari State forces establishing a new "protectorate" in the Syndicate constellation of DS-M4Q have completed their major military infrastructure construction efforts and opened three Caldari Navy station in the 0EK-NJ, T-LIWS, and UM-Q7F systems. Caldari Navy forces have also been enhancing their garrison fleet presence and have built up security outposts guarding the approaches to the constellation.

The DS-M4Q constellation was transferred to Caldari State sovereignty by the Intaki Syndicate as part of an agreement on mutual defense and security co-operation crafted in response to the Federation's intervention in Intaki and ten other Placid region systems. Federation authorities have continued to view this as an "internal matter" for the Intaki Syndicate, although there are reports of increased Federal Intelligence and Navy scouting operations in the wider Syndicate region.

The Caldari State has reportedly increased its trading positions with the Intaki Syndicate, agreeing a new preferential status for the Intaki Bank and giving Intaki Commerce access to certain State markets previously restricted to Caldari corporation. It is also reported that the Caldari Navy and Intaki Commerce have signed a logistics agreement allowing the Syndicate's commercial arm to ship goods via naval jump navigation routes in return for local supply support for State operations in DS-M4Q constellation. 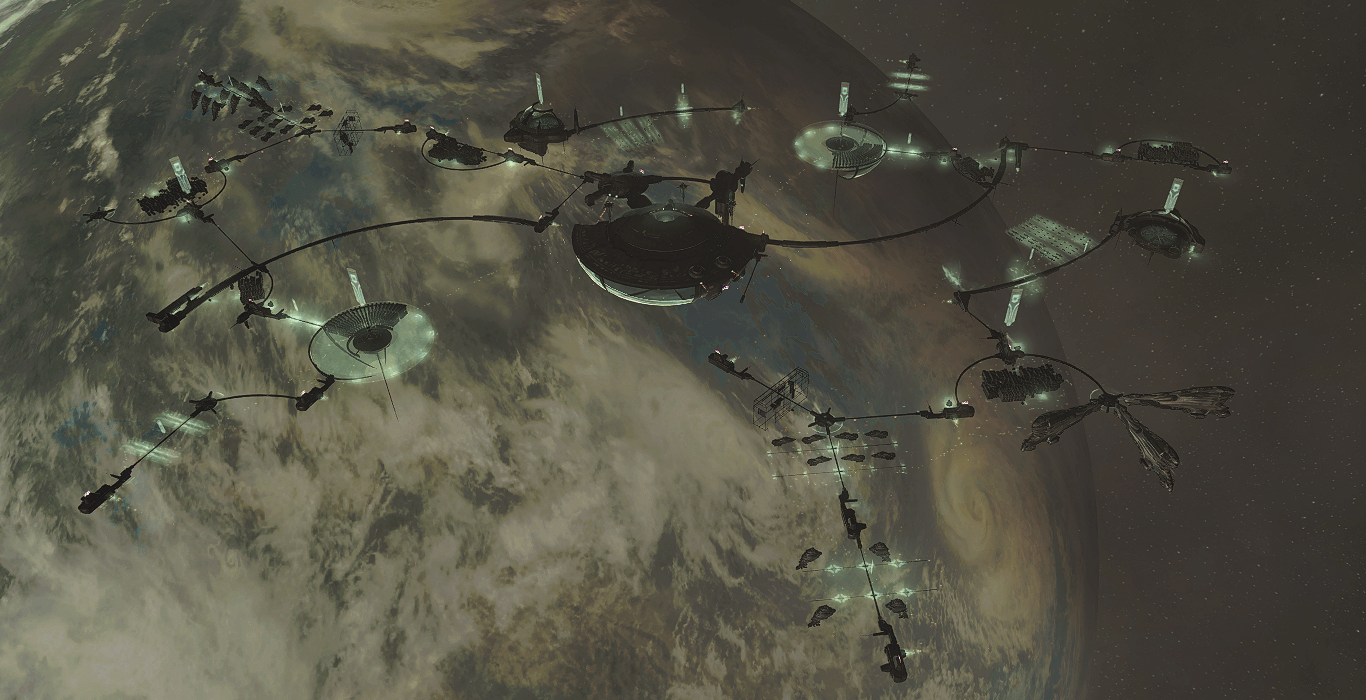 Above: Federation Navy station in orbit of Intaki Prime