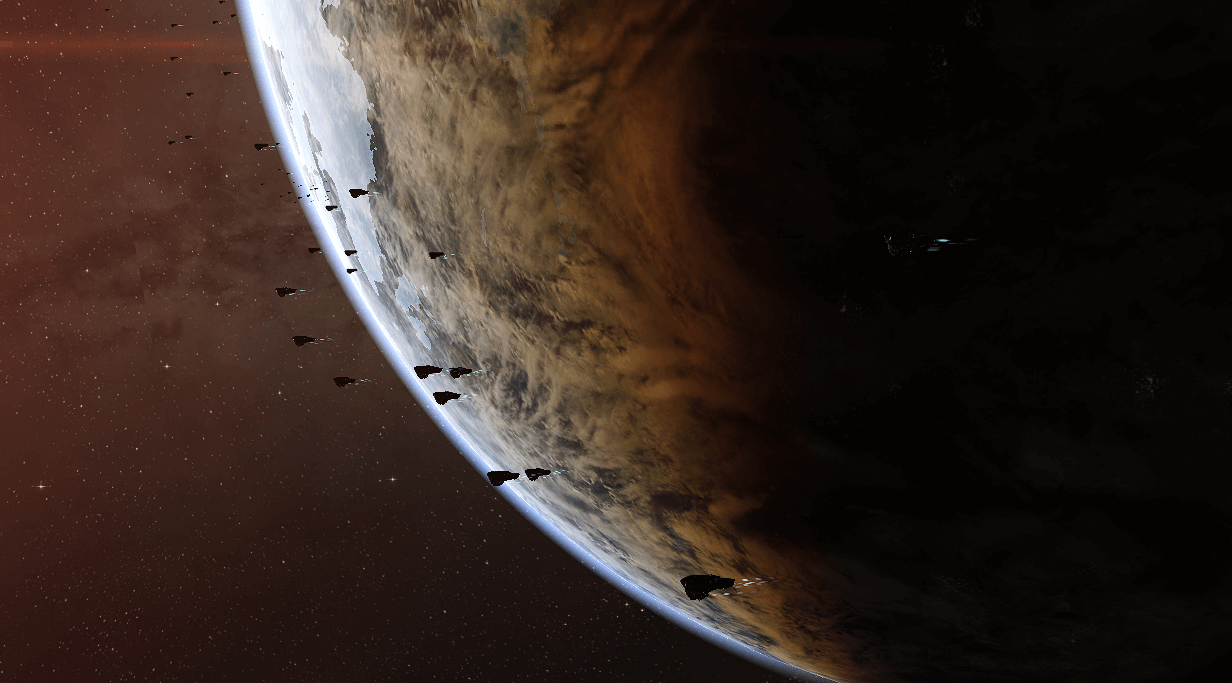 Above: Federation Navy liberation fleet in orbit above Intaki Prime

Luminaire, Essence Region – President Celes Aguard has addressed the Gallente Federation in the aftermath of a major assault on the Intaki system and a number of surrounding systems in the Placid region.

President Aguard delivered her address to the Federation Senate, with it being broadcast across all Federation GalNet channels, as almost all system and planetary networks picked up the speech:

"My fellow citizens, the time has come for the Federation to rise and liberate Intaki, to recover what is ours. These worlds and the peoples of Intaki, the wider Viriette constellation, and the Fislipesnes constellation have long been under the threat of Caldari State occupation and ruthless exploitation by a system of authoritarian corporate rule.

"This state of affairs has always been intolerable to us but our great democracy, a beacon of peace and prosperity for all, chose in the past to pursue a path of diplomacy and observance of law that has so often been cast aside by the megacorporations of the Caldari State.

"We can no longer afford to continue to follow this policy, preferable though it is, wise as it would be in normal circumstances. The long history of megacorporation exploitation of Intaki and the wider Placid region is one thing. Now, though, as we see with the tragic events in the Turnur system, we face the potential of the total devastation of Intaki and many other worlds peopled by our citizens.

"I judged this a threat far too grave to acquiesce before. With the advice of the Federal Security Council, Military Commission, and leading members of the Senate, I took the decision to act. When I was elected to this great office, when I became your President, I promised to place the highest importance on achieving peaceful co-existence with our neighbors, and total and implacable resistance to those who would destroy our way of life.

"Sadly, to fulfil that promise, the actions I authorized today are necessary and if they prove insufficient, you may be assured this Federation will act again."

Gallente forces are now understood to be in complete control of the following star systems in the Placid Region, with the Federation Navy fleet presence removing them from the militia warzone:

Political reaction from the Caldari State has so far been confined to condemnation of the "outrageous invasion" by Chairman Akimaka Saraki in a broadcast to all State citizens. The Chief Executive Panel is currently meeting and has summoned Executive General Heika Torigo and other high commanders of the Caldari Navy and corporate security forces.

It has been reported that Caldari Navy forces have been extensively re-deploying across State territory under what appears to be a standard counter-invasion plan to defend core State territories in response to the aggressive action by the Federation.