The Scope Reports on Rogue Drone Activity, AIR and CONCORD

The Scope's Lina Ambre reports on increasing rogue drone activity and attacks on researchers, as CONCORD intensifies its own efforts at tackling the menace of rogue drone infestations. The Scope's special report investigates rogue drone swarm attacks on AIR research posts, and can exclusively reveal active development of technology by CONCORD agencies and corporate interests.

Above: New AIR Laboratories Station and HQ in orbit of Cistuvaert V

Cistuvaert, Verge Vendor – Despite suffering rogue drone swarm attacks at their observatory posts, and a previous series of attacks on capsuleer training facilities by "unknown forces", the Association for Interdisciplinary Research is reporting that its new stations are "fully operational and secure." The technology and advanced training startup has refused to comment on the latest incidents affecting their research into rogue drones but a confidential source has confirmed AIR Laboratories have "initiated investigations into what went wrong and the lessons that may be learned."

In recent days, the organization has been more forthcoming regarding the reported attacks by unknown forces on AIR training centers. Vesper Calytrix, Vice President of AIR Operations, issued a statement confirming an ongoing investigation: "A number of AIR Laboratories facilities were recently targeted in an unconscionable attack. The AIR family mourns the tragic loss of life and extends its most heartfelt condolences to all those impacted by these events. We are cooperating with the appropriate law enforcement agencies while simultaneously conducting our own independent investigation into the attacks. Rest assured, the perpetrators behind these cowardly and inexcusable acts of violence will be brought to justice."

New Caldari Prime – Chairman Akimaka Saraki has addressed the Caldari State following his confirmation as permanent head of the Chief Executive Panel by the "Big 8" megacorporations at the annual State Industrial Planning Summit. The new CEP Chair's speech emphasized the duty of Caldari to the State, their corporations and their families, leaning heavily on imagery of the rise of the State out of the Caldari-Gallente War to its current prosperity under the megacorporations.

Akimaka Saraki first emerged onto the public stage within the State as a senior director within the Wiyrkomi Corporation responsible for infrastructure security. Saraki played a key role in the effort to fortify the planets of Samanuni system against Triglavian invasion. When the system itself was invaded, Saraki took personal command of the planetary defense of Samanuni VI as highest ranking corporate leader with military experience.

Saraki's role as a voice supporting the right of Caldari citizens to protest corporate malfeasance and incompetence cemented his reputation as a relatively liberal while patriotic figure at home. As an envoy to CONCORD, Saraki was also able to assist in averting open war during the EOM terror crisis. Shortly after this, with former CEP Chair Puok Kossinen disabled by his injuries, the CEP appointed Akimaka Saraki as Acting Chair of the CEP, elevating him to the leadership of the Caldari State.

The permanent confirmation of Saraki represents a political victory for the Combine TNR grouping of Hyasyoda, Ishukone, and Wiyrkomi – the so-called "Ocean Faction" of Caldari megacorporations. Chairman Saraki is understood to have been accorded special executive powers by the CEP to oversee the reform of Caldari State armed forces following the disastrous losses during the Triglavian invasions. 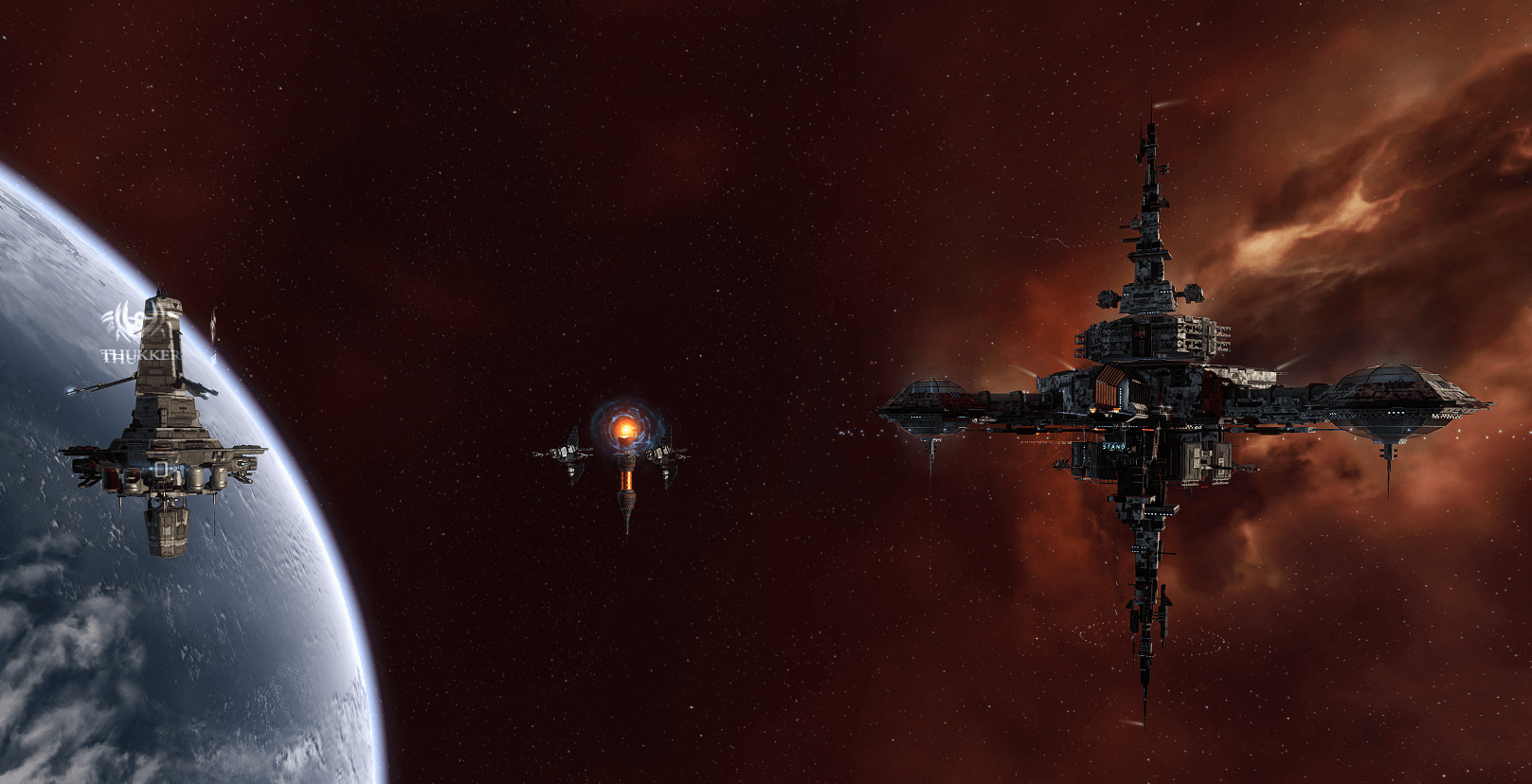 Above: New Halls of Liberation Station and Liberation Games Monument in Orbit of Matar, Pator System

Pator, Heimatar – Sanmatar Maleatu Shakor and Thukker Chief Einnar Aeboul officiated at the formal opening ceremony of the new Halls of Liberation station orbiting Matar (Pator IV) yesterday. The new station will be operated by the Thukker Tribe for the next year due to their victory during the inaugural Liberation Games.

The station has been constructed as a place to remember the sacrifices of the Minmatar people during the Great Rebellion against Amarr rule. Although the Thukker Tribe will operate the station it is formally neutral territory in terms of the Seven Tribes of Matar. Overall responsibility for station security rests with the Thukker but large areas within the station are under Republic jurisdiction, and tribal and clan enclaves within the station have been established.

To fulfill the primary purpose of the Halls of Liberation station, it contains many memorial chambers and shrines to the memory of the heroes of the Great Rebellion. Of particular note is a large museum containing sections for each tribe, the civilization of the old Minmatar Empire, and the history of the Tribal Republic of the Minmatar. The station is perhaps more widely significant as the first in orbit to open for capsuleer traffic, leading to a large number of Minmatar corporations and agencies opening offices aboard the facility.