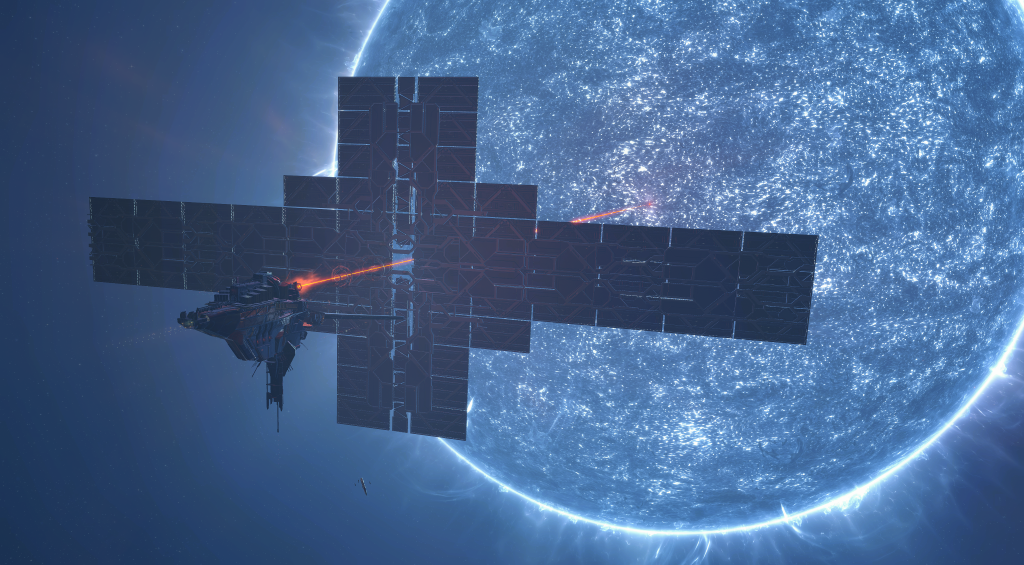 Yulai, Genesis – Hopes are fading for a diplomatic resolution to the controversy and conflict over the Imperial Prototype Stellar Transmuters in the Amarr-Minmatar warzone, as interstellar outrage over the activation of the Turnur transmuter has been echoed by hardening diplomatic postures amongst all the core empires.

For its part, the Amarr Empire's Ministry of War has reiterated the position, first set out by Captain Marshal Sirdan xer Qosh, that the Empire has a "sovereign right to exploit all resources within territories held under the provisions of the CONCORD Emergency Militia War Powers Act YC110". Under this hotly contested interpretation of the controversial and much criticised War Powers Act, the Amarr Empire has often made claims ranging from asserting mineral rights to the right to take slaves from populations "resisting" in occupied territories. Royal Heir Hamideh Kador is Imperial delegate to the CONCORD Inner Circle but has issued no statement as the Imperial Privy Council continues to meet with Empiress Catiz I at the Imperial City of Dam-Torsad on Amarr Prime.

The Minmatar Republic has repudiated the claims of the Amarr Empire, with Ambassador Keitan Yun declaring the activation of the Turnur Stellar Transmuter a "criminal act carried out by a terrorist state run by gangsters and pirates". The Republic's delegate to the Inner Circle further vowed that all Amarr taking part in the Imperial Prototype Stellar Transmuter project would "be marked as criminals and hunted for all time with every means at our disposal". The Tribal Council of Matar was summoned to an emergency meeting by Sanmatar Maleatu Shakor shortly after the activation, with the Sanmatar issuing emergency mobilization orders to all Republic Fleet, Regional Territorial Guards, and Tribal Militias.

The Caldari State's reaction to the event has been muted but has been notably lacking in clear support for the Amarr Empire's actions. Chairman Akimaka Saraki expressed his "profound disquiet and concern at the development", when pressed in a session on the State's economic performance with financial journalists but would say no more. Speaking at a meeting of worker representatives and executives, the Hyasyoda CEO Ahtonen Osmon went so far as to state his belief that the Amarr action is "precipitate and destabilizes the interstellar order" but stopped short of commenting on the Caldari alliance with the Amarr Empire. Lai Dai CEO Alakoni Ishanoya expressed her support for the "clearly correct resource rights interpretation the Empire has of the Militia War Powers Act" but would not be drawn on if that covers manipulation of stars in inhabited systems.

The Gallente Federation has been forthright in condemning the Stellar Transmuter activation, with Ambassador Devan Malate harshly criticising the Empire's "reckless and wholly illegal experimentation with Triglavian technology in occupied territory, threatening millions, perhaps billions of innocents in the process." While the Federation's current military and diplomatic focus is clearly on the developing situation in the Athounon system, President Celes Aguard has ordered that the Federation Navy squadrons patrolling the borders with the Empire and Republic be placed on the highest alert level.

Above: Orbit of Ourapheh IV, Location of InterBus Arcology and Corporate HQ

Ourapheh, Genesis – An extraordinary meeting of the InterBus board ended in chaos today after representatives of the four founding interstellar empires walked out of the session at the InterBus Arcology on Ourapheh IV.

The meeting was hastily scheduled following a report that the Imperial Prototype Stellar Transmuter built in Turnur has become active, with fears those in Egmar and Vard will soon follow. The meeting took place behind closed doors, but according to InterBus insiders, the session ended without resolution of any of the points at issue. The empire representatives present were completely unable to agree on how New Eden's most popular transport and delivery network should respond to the alarming and divisive news from the Amarr-Minmatar warzone.

Founded in YC72, the InterBus corporation is a joint venture between the Amarr Empire, Caldari State, Gallente Federation, and Minmatar Republic. In the past, the organization has been praised as an example of peaceful cooperation between the "Big 4" empires. InterBus itself is directly owned by the core empires and is overseen by a board including empire representatives. InterBus's mission is to maintain strict neutrality and impartially provide transport and delivery services essential to cluster-wide trade and economic infrastructure. Many now fear that rising tensions and the prospect of sanctions or closed borders could make it impossible for InterBus to operate these services across the empires.

InterBus CEO Haukkakka Pukara has responded to these fears in a post-meeting press release: "Freedom of movement, and open access to commodities, products, and services are at the heart of a stable New Eden. Despite their disagreements, all four of the founding member states understand the importance of protecting these freedoms. I have no doubt that we will be able to find a mutually acceptable compromise that allows the continued operation of InterBus's essential services, no matter else the future holds."

With reported military buildups of Caldari and Gallente forces, increased Minmatar agitation for action, and the controversial action of the Amarr, many consider the future uncertain. According to reliable sources high in the InterBus administration, Pukara's words have done little to assuage fears that future conflicts will make it impossible for the organization to operate. It seems that only time will tell what lies in store for this institution and its essential services.