Amarr Prime - Military and security forces of the Amarr Empire have been responding to yesterday's series of terrorist attacks on five Amarr planets over the past 24 hours. Reports from the different locales indicate a variety of approaches to dealing with the aftermath of the attacks, apparently depending on their impact and the posture of local authorities. Claims that the hallucinogenic Deathglow and mutagenic Insorum boosters were used in the attacks appear to have been confirmed by some planetary authorities.

The most seriously affected planets are Dakba IV and Thebeka III, both part of the Ardishapur Family's territories in the Domain Region, and reportedly experiencing widespread rioting in areas with high slave populations. Lord Eshvizir Tapur, Holder of Dakba, issued a statement condemning the terror attacks on one of his system's most populous planets and deplored the ensuing slave revolts. "These attacks are vile blows at the order of the universe but the metropolitan and continental Holders of Dakba IV will have to account for the collapse in the security situation. I am firm that proper moral guidance in the light of Holy Amarr would have prevented this kind of rebellion, regardless of the use of vile chemical weapons," said Lord Tapur.

On Thebeka III, attacks were concentrated on slave districts across the continent of Numayriyah, with considerable violence ensuing in the aftermath. The Holder of Numayriyah, Lord Khalil Numayr is reportedly missing, with his niece Governor Adila Numayr of Dam-Sertene co-ordinating the response. The city of Dabara is reported to be in flames, with Ministry of Internal Order troops exchanging fire with apparently well-armed rebel groups. 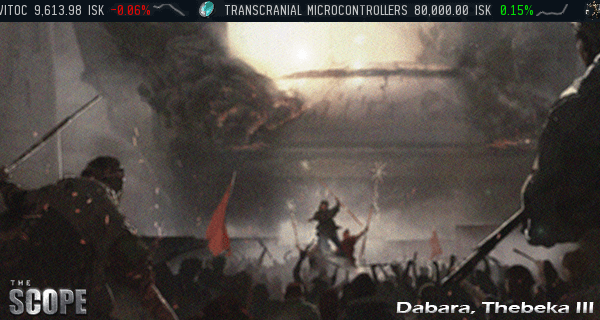 The attack on the Imperial World of Mabnen I is widely reported as having been thwarted by a combination of rapid security response, environmental safeguards and the high use of transcranial microcontrollers among the slave population in the domed and underground cities of a planet that is focused on mining and manufacturing. Sources in the Imperial civil service believe the attack on Mabnen I was a largely symbolic echoing of the devastating June YC107 attack by the Blood Raider Covenant on the planet. Successive Amarr governments have rebuilt Mabnen I with a view to preventing similar attacks, evidently with considerable success.

The Kor-Azor world of Sehmy III is also reported to have weathered the attacks without experiencing large-scale disturbances. Well-placed sources in the court of Lord Antem Ojir of Sehmy attribute this to the extensive use of transcranial microcontrollers among the Sehmy III population. Given the reports from Mabnen, the experimental evidence that TCMCs significantly reduce the impact of weaponized Deathglow would seem to be borne out.

The Sarum domain planet of Alkabsi IV was somewhat worse affected by the attacks and significant rebel activity has been reported. Most cities on the planet were quickly pacified by Sarum Family Police Guards but fighting in the mineral extraction fields of the southern continental outback is ongoing. A battalion of Shining Flame company mercenaries is believed to be accompanying a brigade strength deployment of troops from the 1st Sarum Royal Army with a view to "crushing all resistance to the rule of House Sarum on Alkabsi IV" in the reported words of Lord Arrach Sarum.

The Imperial Privy Council continues to meet in Dam-Torsad on Amarr Prime but has made no official comment other than to issue orders in council to the Imperial Navy, Ministry of Internal Order, Theology Council Paladins and other Imperial security forces.

Khanid Kingdom plenipotentiary representative Sa-Baron Alar Chakaid was more forthcoming, "These evil attacks against Holy Amarr are plainly the work of Ammatar traitors in league with Minmatar rebels and terrorists. The brute mentality of the Minmatar has always been to bite the hand that feeds them, whether that hand is filling their bellies or nourishing their souls. It is becoming clear that current policies on slave-holding, particularly in certain domains, are founded on deeply mistaken interpretations of scripture on the Reclaiming, the Chosen and even matters of economics. We in the Kingdom naturally stand ready to assist our brothers in Holy Amarr in these matters."