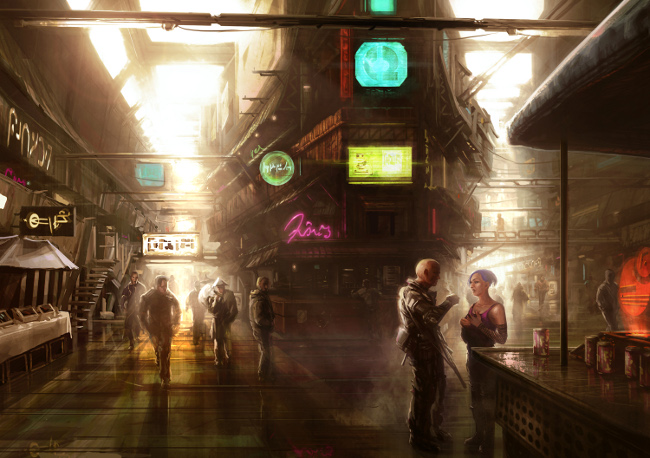 They came to in a jail cell, sore and disoriented. Beyond the alloy bars they could glimpse a single guard doing something administrative.

Once he saw they were all awake, he walked over to them. The guard was a young man, rather disheveled and with the roguish air of someone who quite enjoys being himself no matter the circumstances.

"What's our charge and how long will we be here?" Kralean asked him.

"Disturbing the peace, maybe kidnapping, and might be a while from what I hear," the guard said, adding, "Though I'm sure we'll find some use for the women while we wait."

They glared at him, and he grinned. "Just kidding. We're not barbarians here. Once we find out what this is about, we'll see about extradition."

And there it might've ended, except that the guard started staring at Joreena. After a while he said, "Hey, you're ... oh no," laughed and slapped his forehead. "I don't believe this! You're Joreena, the one who did all those movies way back. Oh wow. In my jail cell, no less."

"Err ... yes," Joreena said, but quickly rallied. "Nice to meet you, I suppose, though I wish it were under better circumstances."

"I've seen everything you did," the warden said with unfettered eagerness, "even those, uh, illegally produced clips that were released when you went into politics."

Joreena smiled. The rest of the team recognized that smile.

She walked up to the bars and put her hands around them, saying, "Well, sir, I'll tell you. It's always wonderful to meet a fan. And I hate being in here. I wish there were some way I could be let out earlier. Do you suppose there's anything you could do?"

The warden winked and said, "So this is the part where you go," his voice shifted up an octave, "Oh my goodness, if only I could change your mind, warden. Let me just hike up my skirt."

She let go of the bars and took a step back. "I was actually hoping you'd be someone I could talk to about a proper, early release. And maybe just talk, about Gallente politics or anything." She motioned to the team. "I've been cooped up with these people for far too long, one way or another."

Kralean and the others stared at her in fascination, enjoying the performance. What she was planning was an incredibly risky gamble, but if they were to have any chance of getting out in time, it was the only way.

Joreena leaned in ever so slightly and said, "Also, I'd really hate it if word got out that I was being held here." She held the warden's gaze. Something unspoken passed between them, and when she added, "There are no cameras in the cell that I can see. Nobody's going to get into any trouble," his eyes responded with an unmistakable intent.

He walked slowly over to the cell door, pulled out a pass key and held it in his hand. "Alright. Walk in front of me please, and follow my directions. Nobody else move. I'm checking on a sick prisoner here, and anyone says any different, they're going to find themselves in more trouble than they can possibly handle." He put the key up to the cell lock and unlocked the door, letting Joreena step through before shutting it again. They headed off to parts unknown.

The team waited. After quite a bit of time Joreena returned, hair ruffled and clothes disheveled, sporting a large, red welt on her cheek. She pulled the warden's key out of a pocket and opened the prison door.

"Politics, eh?" Artenal said as he exited the cell.

"Well, it was obvious what he wanted," she said shortly.

"So where is he? Unconscious and tied up?" Kralean asked.

"He was supposed to be," Joreena said with a sigh. "I had the drugs ready. But he twigged, and started beating on me. I had to stop him."

Artenal and Kralean both stopped and stared at her. In a low voice, the latter said, "I hope you know what you're doing."

She said, "We're out of time either way. But I've got an idea that might get us out of this. When we went into his office I noticed they did have camera controls, and I took a second to check them out after I was ... done. Our own cells have hidden eyes, but they're on a closed-circuit system so nobody else will have seen what happened. I also noticed a couple of linkups to a larger system that's probably located nearby. If we can find it, and not set off any alarms, hopefully we can locate our target, get him and leave without being caught. We're on evening shift time, so we should be good."

"Risky, still. We've got no weapons, and he's got those four grunts that went for us back at the bar." Artenal said.

"Once they find out we escaped and killed one of the guards, we'll be hunted down like dogs, and there'll be no time to do anything but run." Joreena said. "I didn't want this to happen, but it did and we've got to deal with it. If you've got better ideas, other than giving up on the mission and losing out on reputation and money that we actually rather do need, go ahead and share. In the meantime, we'll go with my plan." Without waiting for a response, she set off in search of the control station. The team followed.

On their way through the various corridors, Scaara caught up with her and whispered, "I didn't know you'd go that far, but I'm glad you did."

Joreena gave her a smile.

After a few turns, Scaara shyly added, "How'd you get around the sex thing?" and Joreena's smile turned into a smirk.

Scaara's mouth dropped open. Joreena said, "You should see the scratches on my back."

They came to a door marked, "OBSERVATION", and Joreena nodded to herself. She said to Scaara, "He really was into politics, too. Shame," then turned to Artenal and tossed him some electric keys. "These were the warden's. Want to use them while they're good?"

"Yeah, about that," Artenal said. "While you two were talking about things I really didn't want to hear, Kralean and I were working on a plan. I know things about Gurista security, and he knows things about ... well ..."

"Framing people. And working with bodies," Kralean said quietly. The two women stared at him for a moment.

Artenal cleared his throat. "I think we can buy ourselves a bit of time."

Kralean said, "Did you leave a lot of marks on the body? And were there any heavy objects in the room, apart from the one I expect you used? Any sharp ones, too?"

Joreena shook her head. "No marks. There were a couple of blunt objects, including one that I'd be happy never to hold in my hand again. A few sharp ones as well, pens and such, maybe some small weapons in some of his drawers. I just grabbed what was closest to hand, but then again, he was screaming bloody murder."

Kralean nodded and said to Artenal, "You'll take it from here?"

"Sure," Artenal said. Kralean left, heading back to the jail cells and the warden's office.

Artenal turned to the two women. "Scaara, there's probably two guards in that room. Once I let you in, you think you can take them out, and not kill them, please, without them setting off the alarm?"

Scaara smiled. "No problem." The lack of violence was a frustration to her - particularly since Joreena had had her chance - but any time she was given orders, it enforced a tiny bit of peace in this chaotic life of hers. She knew full well that left to her own devices, she'd have gotten in a lot more trouble.

"Alright," Artenal said. "On my mark, please." He fished out an electric key, held it up to the door's lock, and whispered, "Go!"

The door opened, and both Artenal and Joreena moved out of visual range. Scaara stood in front of it, and underwent a remarkable change. That petite body, usually carried as if it were a coiled spring covered with poisonous barbs, lost all its tension. It slunk in on herself, and suddenly Scaara looked like an overgrown girl, insecure and lost. She walked slowly into the room, and the last the other two heard before the door closed was her quavering voice going, "Hello? I'm lost, and I think something bad happened-"

A few minutes later, the door opened again and Scaara came out, smiling. "Easy as docking," she said. "Come on in."

The room was fairly sizeable, and clearly used both for supervision and storage. Aside from vid screens and controls, there were crates, various pieces of metal scraps, and other debris. In a corner was a steel table with steel chairs, on which lay a card version of the Mind Clash game. Two men lay unconscious beside the table in a rather revealing position, their hands and feet tied fast with their own clothes, and their eyes bandaged with something even more ad hoc.

Artenal stroked a hand over his face, sighed and grinned. "You've blindfolded them."

"You've blindfolded them with their own underwear."

Scaara shrugged. "Use what works."

"Next person we kill is all yours, and I'll give you whatever equipment you need. You're starting to frighten me," Artenal said. "Anyway, here's the scoop. Because of their ad-hoc connections to the main Empire systems, Gurista data security is always a bit lax on the internal side. It does have its safeguards, which are run in the quiet hour at noon, and if anything's found out then they raise bloody hell. Until then, so long as I manage to make a few changes, we'll be safe. First thing I'll do is muck with our prisoner registration and change Scaara to a Minmatar."

"Just so they won't associate this humiliating little guard-beating girl with our team, dear." Artenal pulled out the other electric card key from his pocket, sat at the controls for one of the vid screens, and started working. A few minutes in the team heard a soft gasp from him, and a vein on his forehead started to visibly throb, but he didn't turn his face from the screen and they didn't inquire further.

After a while, Kralean came in through the door. Without looking back, Artenal said, "All done?"

"One sec," Artenal said. He kept working for a few minutes - the rest of the team knew better than to interrupt - and at last turned in his chair and faced them. "We're set. With really ugly hacking, I should add, and that's coming from a Minmatar."

"Nothing I couldn't handle," Artenal said.

"Shahoun is still on station, and so is that team he hired to protect him. Even better, they're spread out. Logs say they've each got some business appointment, but will be leaving later today, so I've put down blocks just in case they had feelers out on our own info." He leaned back in his chair. "I've also overwritten some of the data the Guristas had stored on both us and them. Anyone looks us up, we'll appear way more innocent than we are, and in fact quite good at dealing with the exact sort of problem the Guristas are about to have. Which is a good thing, because I saw some things in our records that even I didn't recognize."

"And anyone who looks up the other team?" Joreena said, a dark and happy suspicion blooming in her mind.

Kralean said, "Will find that one of their members invaded a Gurista prison, knocked out the supervisors, tried and failed to kidnap a group of innocent prisoners awaiting trial." He smiled, entirely without warmth. "And last but not least, murdered the warden. The evidence is all there."