Methods of Torture - The Minmatar 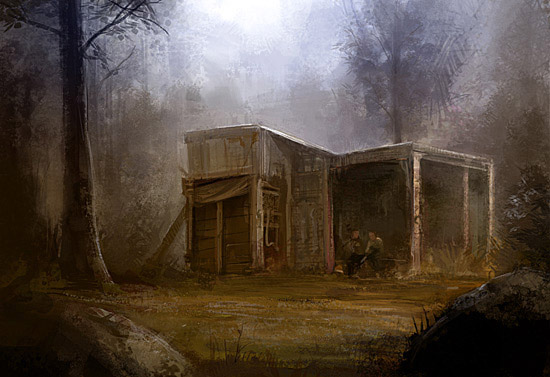 But when it was all over, when the blood had been mopped up and the devices cleaned and put back in their place, and what was left of the victim had been carted away, Song turned to his mentor and said, "I don't think I can do this."

Malachai, far older, looked at him and said nothing. They were sitting on a bench outside the wooden hut used for interrogations. The insides of the hut were padded with straw. On its outside hung various interrogation instruments.

"I just don't think I can fulfil my duties as a senior Torturer, when the time comes." Song traced a line in the dirt. "I've spent a lot of time thinking about it, and I just haven't been able to come to terms with all of this. I can't stop feeling that what we're doing here is wrong on a fundamental level. It may be necessary, but I can't see my part in it."

Malachai reached up and picked from the wall of the hut a wooden instrument, shaped like a star with sharp points. "This is a tool," he said. "It was built for a purpose. It is silent and, if properly cared for, performs its function admirably." He sighed and put it back. "But we're more than dumb instruments of fate, and sometimes we forget that. I agree that what we do here may seem evil. It's certainly not something you'd expect of civilized people, and I'd hate for my adepts to take any more pleasure in their work than that of a demanding job cleanly done." He put a hand on Song's shoulder. "Everyone has to find their own way. No one should be forced to be just another tool on the wall."

"But it's not ... I mean, I want to help. I want to take part in the revolution," Song said. "And I've spent enough time as an adept to know I'm good at this. I don't make anyone suffer an instant longer than they have to. It’s something I really think I was made for, at least as far as talents go."

Song nodded glumly. "I feel shackled," he said. "I feel like what we do here has become a prison, and the weight of our actions has chained me down."

Malachai looked at him for a while, then got up. "Wait here," he said.

Song nodded again and laid his head against the wall of hut, letting the sun shine on his face. He heard Malachai's steps retreat, fall silent, then return.

"Here you go," Malachai said, handing him a small rucksack. "All you'll need for your trip."

"The one you need to take. Don't worry, we've got everything covered back here. I've been waiting for you to reach this stage, actually. The food in the bag is dry stuff, but it lasts and gives you energy. There's some bottles of water there, too - you'd do well to conserve those."

Malachai pointed. "See those mountains? Beyond them is the Sobaki desert. That's where you're going."

"What am I supposed to do there?" Song said.

"Talk to the spirits, and decide once and for all whether you want to be a Torturer. There is a small box in the bag, made of ivory and wrapped in velvet. Once you've crossed the mountains and reached the Sobaki sands, you'll see one oasis, and only one, on the edge of the horizon. Head there. It's only a few days' journey, and the food in this pack will get you there."

"What about the way back? What'll I eat?"

"Don't worry about it. The ivory box will take care of that. Go.. I will see you here again when you've figured out the nature of your chains, and are ready to give me an answer."

The mountains had not been as difficult to surmount as he'd expected, but the desert had dried him out. Song sat under a palm tree in the oasis and finished off a water bottle. There was a pond there with clear water, and some bushes in the shade that held a few berries.

He reached into his bag and brought out the velvet-wrapped box. The cloth glistened like oil in the sun. He unwrapped it and inspected the ivory beneath. It was intricately carved, displaying various figures from Minmatar fables and myths. On the top was the familiar sign of the Khumaak.

Song lifted the lid. Inside, in separate compartments, were three bits of a darkish root Song didn't recognize. He picked up the smallest one. It felt heavy but dry, had a faintly sweet scent, and all in all didn't much look like the sort of thing you'd want to base life-changing decisions on.

Song shrugged and popped it into his mouth. He lay down in the shadow of the palm tree, eyes closed.

Eventually, his stomach began to growl. He picked up the other two bits from the ivory box, ate them and lay back down. Clouds drifted overhead. A Yetamo lizard, sacred in the old myths, darted from out under a rock and stared at him, its tongue flicking at the air.

"Might be I'll end up eating you," Song said.

"Right." Song scratched his arm and yawned, then froze. "Did you-"

"Yes indeed," the lizard said. "Though right now that's the least of your worries. Feel a little cramp, do we?"

"You ... you ... what ... aaaaaagh!" Song grabbed his waist and keeled over, grimacing. He burped a few times, then lifted his head and vomited.

"Ugh," the lizard said. "Don't try to talk. You'll be that way for a while. I'll come back when you're done." It crawled back under the rock. Song gasped for air in between retches, and kept on spewing.

Finally, the cramps lessened. He was at the point of retching blood by then.

The lizard crawled out. "I'm here."

"Why is this happening?"

"Because you're not ready for what needs to be done. So we're going to help you."

Song wiped drool off his chin. "Some help," he said. "You… whatever you are. What made you think that tricking me into the desert to eat poison was going to change my mind about becoming a Torturer?"

The lizard regarded him with reptilian stoicism. Then it crawled closer and began to talk.

It told him of the manifest destiny of the Minmatar. Of the horrendous price they had already paid, and of what might lie ahead depending on what choices they made. It spoke of those choices at length, their benefits and their terrible costs. It compared the cost of individual liberty, happiness and life – a cost that could include hard choices made in blood – with the dangers of losing them all.

Once the lizard had finished with him, Song sat mute in the shade under the tree, drawing lines in the sand and then rubbing them out. The lizard said something as it crawled back under its rock, but Song just shook his head and kept tracing the lines, rubbing them out, retracing them.

"Won't do you much good to leave your legacy in the sand, boy," a voice said.

Song looked up, cupping one hand above his eyes to shield against the sun. "... Dad?" he said.

"The same," the man answered and sat down beside Song.

Song's father - whose name was Auber - looked at him. "Yeah, I am. That mean I can't spend a few moments with my favorite son?"

"Your only son," Song added with a tiny smile.

"Still my favorite. Now, I'd like to lecture you about having forgotten all your old lessons, in particular about not eating every goddamn thing you find. But we don't have the time. See those tiny clouds over there, by the horizon? The dark ones?"

"Those aren't clouds. By the time they get here, you need to be ready. I ever tell you about the time I got caught by my master for stealing a loaf of bread?"

Song stared at him. "No. Far as I knew, your master was a kind man."

"A kind man. Yeah." Auber picked up a handful of rocks and began throwing them into the distance, one at a time. "That's exactly the kind of stuff you tell a small child whom you know to have big ears and a mouth that never stops."

His father made as if to speak, then stopped and stared at the ground in silence. After a few moments he dropped the rest of the rocks, rubbed his eyes and sighed. "No," he said. "Not kind at all. Nor were the other masters. I know you've heard some of the stories, because you wouldn't have become an apprentice to a bloody torturer otherwise, but the fact that you're here and that I'm talking to you means that you haven't yet heard them all. So listen." And his father told him of the old master, and the small tools the master had kept locked in a cupboard in his study - tools taken out only when a slave had caused him trouble. He told Song of the other masters and the silent atrocities they'd committed, day after day, and of the countless small rebellions that had eventually bought Song and his mother freedom. He spoke at length about the nature of that freedom, and its continued price.

By the time he was done, Song had not cried, nor made a sound.

Song, staring at the ground and slowly grinding his teeth, heard his father take a few steps into the distance. When he finally looked up, Auber was gone.

He rubbed his eyes and looked at the horizon. The clouds had gotten nearer, except ... except his father was right, they weren't really clouds. It looked as if they were hugging the ground a little too closely for that. The longer he stared, the more he felt it resembled a herd of insects, trampling its way through the jungle with the day's bounty carried on their backs.

Day was giving way to afternoon, and he felt the weariness in his bones. His stomach was completely numb. He let his head fall back, against the stem of the tree, and slept.

He woke to the sound of footsteps. It was getting dark, and he had to rub his eyes and strain to see what was approaching. When he did, his breath caught in his throat.

He sat very still as the first one walked up to him. It was a man, or at least what was left of one. Several parts of the body had been cut, burned, or mutilated in some manner. One eyesocket was empty, both ears had been torn off, and the upper lip had been neatly severed in half, but what was left of his face was a near-exact replica of Song's.

The man limped up to Song and dropped down on one knee. He bowed his head, and Song saw that his scalp was infected with dozens of seeping wounds.

"Father," the man said, then got up and walked past Song. The second man kept his head bowed the entire time as he, too, knelt and stumbled past, but Song caught a glimpse of his face; the resemblance was still striking, but a little more faint. More came, all scarred and broken, trudging by like the weight of the sky and the earth had been placed on their shoulders. Father and son, father and son, kneeling to him in unborn potential, and as Song gazed into the distance, he saw that their line lay unbroken to the ends of the earth, a trail of blood and pain, of stagnation and fear, of chains and suffered cruelty until the end of time.

Malachai was cleaning his tools when he heard footsteps. He turned, and saw not the boy he'd sent out, but a stranger. Someone who, by the looks at him, hadn't eaten for some time, but whose gaze was cold and unwavering nonetheless.