Methods of Torture - The Caldari 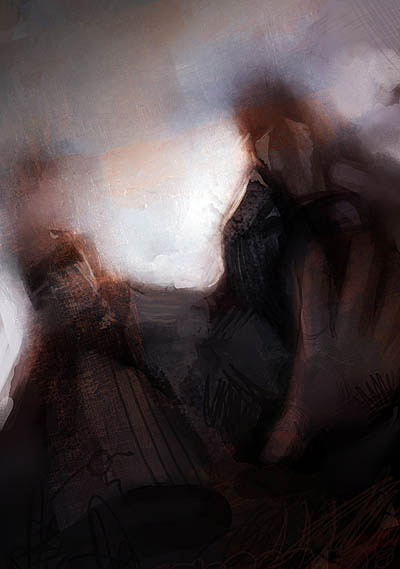 He lies in the middle of a golden field. The sun, not yet high, gently warms him. The field has grown and not been harvested, so from where he's lying it looks like the long stalks of wheat are reaching for the skies.

He lifts one hand and reaches, too. Then he lowers it. All the while, he keeps his vision focused on the sky, on the distance.

Not once did he cry out in pain. All that was done, really, took place while he was asleep, or just somewhere else. And there was no speaking to others; it is Not Done to share these things.

Sometimes he fingers the scar behind his ear, where they went in.

It is a fact of nature that the things that grab our attention, the ones to which we react the strongest, are the things that shock us. Something comes at you slowly and deliberately, and you have time to think. Something jumps at you, and you don't. You can't put any of your filters in place; you just react instinctively. If the threat disappears as quickly as it appeared, though, all that instant mania was for nothing.

It is also a fact that high level organisms, having developed the capacity for abstract thought and imagination, can be made to feel threatened in a far greater variety of ways than the simple things that merely crawl around in the grass.

He can't quite remember how he got here. There was ... a long walk, he's sure, but he remembers it as rather comfortable and not really the sort of thing you'd associate with extended rambling through the grass and the fields. Perhaps he merely dreamt it and is now waiting to wake up.

A long wheat stalk, too heavy in the head to rise alone and so relying on the support of its brethren, has bent down into the void created by his body. He strokes it, then grasps it tightly between thumb and forefinger and breaks it, sticking it into his mouth and chewing languidly. There's no hurry. There was never any hurry.

Months ago, he stole some things. It was an impulse decision, quite unlike him, and didn't seem like much at the time. Just some documents he found while working late one night, documents he grabbed and stuffed in his jacket. What he was going to do with them, he can't remember. Probably nothing; stolen on a vague notion, the idea of gain, rather than for any concrete use. His ideas veered from blackmail to selling to simply putting the documents back.

When they came for him, he was still trying to decide. That's what hurt all the way through: He hadn't even done anything yet! He had taken the documents and he was sorry, but he wasn't a bad man. He wasn't a traitor.

They didn't believe him.

There were needles and sharp, glinting things, but there was very little actual pain. Everyone wore white and had theatre masks that showed expressionless ivory faces. He was made to sleep, often. They asked him the same questions again and again.

It was a short while later that the visions started. He would be lying there, strapped in, while a doctor - he preferred to think of them as "doctors" - slowly turned a dial back and forth. The dial had no numbers, only a line of varying width that snaked around its circumference. The doctor would stand beside the dial, so he could see how it was being turned.

They asked him the same questions again and again. When his answers displeased them, the dial would be turned.

At a low level nothing much happens. He will sometimes speak to a doctor whose mask is not, in fact, a mask, but his real face. The ivory lips move, and the ivory voice speaks directly into his head. That doctor only appears when the dial is turned.

At a medium level he sees little things with many legs, crawling towards him.

At a high level there are no shapes, no distinct colors nor forms. He loses the ability to discern any concrete entities. His mind becomes a kaleidoscope turning at uncontrollable speeds.

They'd ask him questions again and again, until he was sure he'd gone utterly mad.

A butterfly lands on a nearby stalk. He wonders why it drifted in. There are no flowers here.

The butterfly is quick, but his hand is quicker. He crushes it, lets it fall to the ground beside him. He smiles. He envies it, and wipes his hand on his face, imagining that its blood is his and that he's dying too.

A group of people came to see him once. They all had the same masks as the doctors, but their builds showed that they were younger than the regular staff. A doctor put his hand on the dial, which was turned off, but did nothing with it. The doctor then turned to the group and this is what he said:

Then the doctor started turning the dial.

After some time they set him free. Free to wander around, dazed. No one knew what he had done, but at the same time everyone knew that it had been dishonorable. He couldn't get a new job, of course. Not even the lowliest street sweepers would talk to a dishonored man. His family deserted him. His friends never answered. Even complete strangers, passing him in the street, gave him looks, as if they could smell his rank.

His savings had been left intact, but he never had to dip into them, because he'd been given a monthly pension. That, somehow, made it even worse.

In some of his more lucid moments, he reflected that what was being done to him wasn't because he had committed a serious crime, not really. It was because he had committed one that was not serious, that had not been the result of a planned, thought-out criminal action, that had just tempted an everyday corporate man. And they couldn't have that. So he was being made an example of.

They had put something behind his eyes. That was the only way to explain it. It was like the advertisement techniques he'd heard of, where an image was flashed so quickly that you didn't consciously register it. Quafe was rumored to have used this as part of their early aggressive marketing campaigns.

It was quite simple, really, the way it worked. Sometimes when he blinked, an image was put on his optic nerve. Not every time, and sometimes not for hours, and even when it had started it was irregular. There was really no way for him to know when it would happen.

The image was of a crime scene. Or an accident, though he couldn't imagine what kind of mishap could cause this kind of mutilation. He never got to see it clearly, because the image wasn't projected if he kept his eyes closed. He suspected that some mechanism inside him detected when it was a real blink and sent the image at just the right time.

There really was a lot of blood. And other things.

The first time it happened, he dropped the bag of takeaway food he was holding. He blinked a few times, shook his head, then bent to pick up the bag. It happened again just as he'd grabbed hold, and he fell to his knees in shock and fright.

It caught him off guard every time. Every single time.

The scene was usually the same, though the particulars changed. Sometimes he was sure there was something in the middle of the carnage, something with a large, dark mouth and several rows of teeth. Other times there were light, nearly white patches on the fringes, and he wondered whether he might be looking at an image of the doctors and some very unfortunate patient.

One day, inside a grocery store, he came upon a man he'd once known. A respected man, known for some peculiarities but well-liked all the same. The man ignored him, of course. He would have passed on, lost in his own thoughts, if he hadn't caught the sporadic trembling in the man's hands. He stopped, pretended to busy himself with some discounted wares, and shot glimpses at his old friend. He noticed that occasionally, when the man blinked, it was as if a slight tremor passed through his body.

He stood there in wonder, trying to decide whether he had really seen this and how he could possibly know for certain - since people wouldn't even speak to him - until he realized that maybe this once he could use his ostracization to his advantage. He walked up to his friend, said, "Excuse me, won't be a minute," and, with two fingers, quickly parted the hair just behind his ear.

There was a scar.

The man froze, and stared straight ahead, as if he'd heard the sounds of a monster behind him and was determined not to look back and see.

That night he'd cried even more than usual. Not only for the fate of his friend, but for his own inadequacy and shame in not having overcome the same handicap.

Dementia is another symptom. When the ability for coherent reason has failed this grossly, the reality one has created through one's senses and mind may become detached from objective view.

He lifts one hand and reaches. Then he lowers it. All the while, he keeps his vision focused on the sky, on the distance.