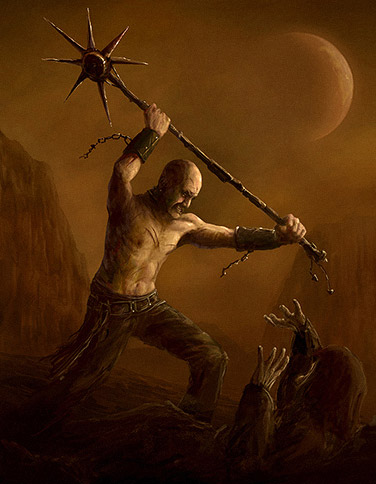 The palace gleamed from a distance, radiating wealth and opulence. On closer inspection, it didn’t hold up well in the tropical climate. Starkman Prime’s proximity to the unforgiving Arzad sun meant the heat rarely let up, and here moisture had caused small cracks all over the walls, with the smell of rotting vegetation permeating everything. Today, however, with three men cowering on their knees in the open courtyard, the rank smell of sweat and fear managed to override it temporarily.

Arkon Ardishapur, the royal heir of the Ardishapur family, sat uncomfortably in a chair on a raised platform before the three cowering figures and frowned in the heat. The insistent buzz of tropical insects made it hard to concentrate as he let his gaze travel among the Minmatar slaves before him. They were guilty of rebellious actions and would soon be executed, but Arkon sensed they held some dark, sinister information, and so hesitated in carrying out their sentence. Arkon glanced at his palace secretary, standing expressionless to one side. Drupar Maak was a Starkmanir, like the slaves waiting to be executed. He was also a slave, but like many slave children that showed remarkable talents, had received a proper education in an Amarrian school, which had trained him to become a loyal, obedient civil servant. Arkon sighed and turned his attention back to the condemned slaves. They would have to be broken.

It took all of Drupar’s considerable willpower to keep his face impassive as he watched his secret associates being put through the wringer. Drupar could only admire the slow, deliberate technique of the royal heir as he questioned the slaves. Arkon had mastered the skill of breaking a person’s will through only words and gestures. When Drupar had heard of the capture of the three slaves, he hoped for a quick trial and an even quicker execution. Now, cold dread gripped his bowels as he watched the old fool grilling the quivering slaves before him. “Old fool, yes,” Drupar thought, “but devilishly cunning at times. Like a dog, he can sniff out conspiracies where no other man can.” As much as he loathed and hated the man himself, Drupar had long since learned to respect his master’s abilities.

Arkon absentmindedly fingered his golden scepter as he shifted his enormous bulk from one buttock to the other. He felt he was finally making headway with these miserable wretches. As he had suspected from the start, they were only cogs in a much larger organization; an organization aiming to topple Amarrian authority on the planet. Now, he had only to squeeze the names of the ringleaders out of them.

As the moment when he would be exposed as a treacherous rebel inexorably approached, Drupar felt his pulse quicken, adrenaline pumping through his veins, heightening his senses. Years of careful planning, hundreds of fellow slaves and rebels, all were in dire danger of being undone in one fell swoop. The questioning droned on until Drupar felt himself act—not deliberately, but as if driven by primeval instinct. Rushing towards his master and nemesis, he grabbed the golden scepter, yanking it out of the Heir’s royal hands. For a split-second he allowed himself to enjoy the look of shock and disbelief on Arkon’s face before driving the sharp, sun-flaring edge of the scepter’s head into his master’s neck. Blood sprayed everywhere. Chaos ensued.

Amazingly, the aged Heir, blood spattering from the gaping wound in his neck, managed to rise to his feet, his obese frame quivering in front of Drupar. A mechanical silver hand shot out of Arkon’s robes and grabbed Drupar by the neck, and from the corner of his eye Drupar saw guards piling into the courtyard, arms raised. Using every last ounce of his strength he managed to slip from Arkon’s grasp long enough to shout at the stunned slaves, still on their knees. “Get out of here! It has begun! Rise! Rise!” he screamed as he was sucked back into the crushing embrace of the dying heir. As daylight turned to darkness before Drupar’s eyes, he saw the three youngsters escape in the confusion.

Strong lights illuminated the courtyard, banishing the night. The unnatural light made the usually serene courtyard bleak and forbidding, but it fit the mood of the few people there perfectly. Idonis Ardishapur stared at the faint traces of blood on the cobblestones, musing on how bloodstains always managed to mesmerize people, making them conjure up all kinds of horrors in their mind’s eye. He listened to one of his lieutenants drone on about how the uprising in the city was already spreading outside it, and rapidly becoming unmanageable. On his other side stood the captain of the royal guard, anxiously awaiting the opportunity to make some pitiful excuses about the death of Idonis’ father. Idonis had already heard enough to know this was inexcusable.

Brusquely, he dismissed the two men, having no patience at the moment to deal with them. Instead, he walked over to where his friend Zoriac was standing, scrutinizing the golden scepter-turned-murder-weapon. Briefly, Idonis wondered about the symbolism of his father being killed by an item representing the Emperor’s will. He would have to reflect upon that during the morning mass. But not now.

Zoriac gave a curt nod as Idonis came up beside him, but Idonis took no notice of it. He and Zoriac, being of the same age, had been brought up together, and Zoriac was as close a friend as a future Royal Heir could hope to have. Idonis again regarded the scepter with mixed feelings. On one hand, it was one of the most sacred symbols of Imperial and Divine authority; and on the other it was covered with his father’s congealed blood. Idonis knew from reports that some of the rebels were already wielding shoddy replicas as weapons, calling them Khumaak in honor of his father’s killer. Idonis’ stomach soured at the thought.

Not for the first time this night he reflected on what might have been. He had agreed to accompany his father here to these savage lands, nurturing some naïve notions that maybe the Word of God could be brought to these newly-conquered barbarians.. Idonis now knew that the Minmatars would never adopt The Scriptures as their own, and part of him was glad, fearing for the purity of The Word in the uncouth hands of the Minmatars. And yet, calling them barbarians was now only a figure of speech. Once familiar with their rich culture, Idonis could not mock their traditions as he and his friends had done frequently as youths back in the heart of the Empire.

Involuntary, his mind drifted to the little hiding place he had down in the city, to the lithe and winsome creature he whispered words of passion and affection to during lovemaking. His family and friends would be appalled if they knew of his dark-skinned Starkmanir girl, with her almond eyes and her smile that was coy and bold at the same time.

With sudden realization, Idonis knew that that part of his life was over. He was a Royal Heir, now. Already he felt the weight of a thousand generations of Ardishapurs on his shoulders; the burden of the millions of subjects now looking to him for support and guidance. The idyllic lifestyle he had enjoyed here on the outskirts of Empire was gone. Like great stones grinding, he could feel his priorities shift. He felt at once elevated and apprehensive. He straightened his back and narrowed his gaze. Zoriac, looking at his friend, took half a step back, and Idonis saw that he understood.

“The other heirs will judge you by your actions over the next few days,” Zoriac said quietly. “A new heir must prove himself in the eyes of his subjects and his Empire.”

“You must clean up this mess your father has left,” Zorac continued. “You must send a message that you will be a strong leader, worthy to be called a Royal Heir.”

“What are the choices?” Idonis replied, already knowing them full well, but wanting to hear them out loud.

“Stamp out this rebellion of course, with any force necessary.”

“That will not suffice,” Idonis answered, sickened by his own words but knowing they must be spoken. “As you said, I must send a message to the other Heirs. Suppressing rebellions is an everyday occurrence. Avenging the murder of a Royal Heir is not.”

“What would you have me do?” Zoriac asked.

“Annihilate the Starkmanir tribe.” Idonis paused for a moment and caught his breath, mentally crushing something deep within himself. “Inform the orbital fleet. Have our people out of the cities and in orbit within a rotation. This planet will burn as a beacon, to illuminate the galaxy with the strength of House Ardishapur, and the Divinity of our purpose. None shall be spared.”

Idonis looked his friend in the eye as he spoke, seeing the regret there. He knew his own eyes showed the same. Regret about the life they were to leave, regret about what they had to become, but most of all, regret about what they were about to do. He allowed himself one more memory of his little hiding place, the long supple limbs of his Starkmanir lover, and the dreams he had harbored for the Minmatars. Then he let it go. Royal Heirs could not afford the luxury of dream.

“Time for mass,” he said, turned on his heel, and headed for the chapel.