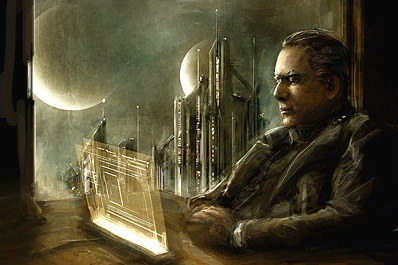 The Admiral closed the holo-conference connection and glanced out the window. Darkness had fallen and two of New Caldari’s moons had risen.

“Continue personal journal,” the Admiral said. A small flashing icon appeared in the bottom corner of the holographic display.

“The divisional leaders’ meeting this evening was productive, not all good news, but productive. STAR is reporting an increase in new pilots coming out of the various academies and an increased workload. I wish the academies would give a bit more real-life training instead of simulations. Piloting a Mammoth in a system with a lower CONCORD presence is much different than racing a souped-up Burst between here and Matigu. STAR needs more personnel to give these new pilots the assistance they need.”

‘The Communications Relay Commission is reporting an increase in faster-than-light message traffic. Their fluid routers are handling the load fine, but a slight increase in funding and resources may need to be considered in the near future. Spurious and illegal traffic is declining due to their efforts and some activity has been turned over to the SCC for further action. There are going to be some very annoyed CEOs and CFOs enjoying some time in the penal colonies.”

There was a knock at the door. The icon on the screen remained steady at the Admiral’s “Pause recording” prompt. “Enter,” the Admiral called out. An aide de camp walked into the room carrying a black striped folder.

“Sir, AURORA is reporting an increase in Angel Cartel activity in Curse.” The aide passed the folder over to the Admiral to look through. Graphs of souls lost, ships and cargo destroyed, projected economic impact to trade in the region and other information was dispersed through dossiers of Cartel agents, activity reports and intelligence.

“Forward AURORA’s sanitized findings to DED for action. Make sure the intelligence is clean. We don’t want to lose another AURORA agent. Don’t make the same mistake your predecessor made.” The Admiral handed the folder back.

“No, Sir! The information will be clean with no possible ties to our sources.” The aide tucked the folder under his arm, saluted and left the room.

The record icon on the holo-screen started flashing again. “The boys in the Technology Division want a closer look at the Transcranial Microcontrollers and see if there are any manufacturing ties to the Sansha devices. I have to agree with the Bug Hunters, the Inner Circle made too quick a decision on their usage. The Bug Hunters are also working on some other issues, the notification after a successful jump installed in the last pod flightware upgrade caused some pilots migraines and they got that removed quick enough. They bust some major butt working on these things.”

The Admiral paused for a moment and rubbed his eyes. The record icon continued to flash next to the clock. “End personal journal, bookmark and close all files, shut down. Time to head home.” The holo-projectors blinked and went dark.