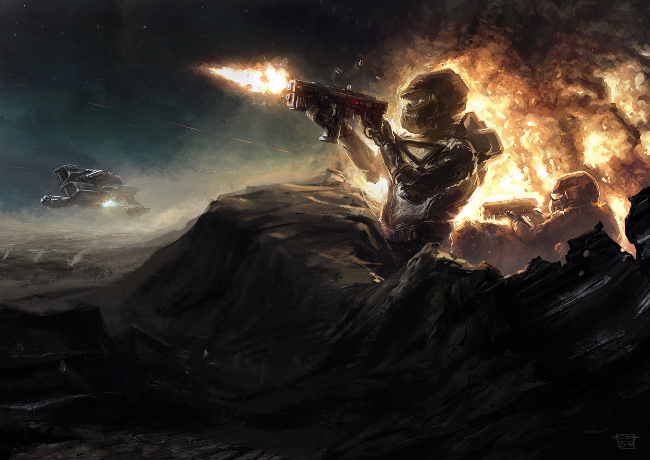 The group that touched down on YHB-349 was already a sorry one. Ambushed by a picket patrol as they entered the system, the convoy swiftly found itself outmatched as a wing of Gallente interceptors pounced on them and ripped through their formation. The operation commander had kept the convoy small to evade detection; the gamble failed to pay off. Those ships still combat-capable after the attackers' first pass stood their ground and sold their lives dearly, and in the confusion the lone Crane transport slipped away with its structural skeleton barely intact.

Six hours later, it grounded on the surface of the target asteroid, and the surviving crew clambered out of their travel restraints to assess the damage. Hull breaches had claimed the commander and most of his staff, and of the three specialist work teams that boarded there were barely enough survivors to form two, along with three surviving Navy crew, one Senior Foreman and a junior engineering manager. The tools and materials, designed for hostile environments, were unaffected by exposure to vacuum, and consensus quickly arose that they would attempt to assemble the listening post as well as they could with the remaining personnel.

The first job, though, was survival. Under the Foreman's quiet direction, the work teams donned construction suits and hauled habitation equipment out through holes in the transport's hull. This was standard equipment, and the men and women on the teams had been hand-picked: after three hours of back-breaking work they had a viable hab centre erected on the dark side of the scarred rock, which could sustain them indefinitely.

As the domes finished pressurizing, the population of the rock assembled in the central hall to resolve the next pressing issue. The Foreman looked at the acting captain of the transport, who replied, "Dirtside" and shook his head. The Foreman nodded and then spoke up. "I speak for the workers. The engineering manager is best suited for the task of leading us. I name him Director."

The work teams nodded slowly. The new Director stepped forward. "I accept and will execute the job to the best of my abilities. I want a planning meeting with the Foreman and team leads in five minutes, and we'll need a full inventory within the hour. We all have work to do - get to it."

Planning took a gruelling six hours, in which the entire project plan was reviewed, re-evaluated and rewritten. The sensor cluster at the heart of the listening post needed to be buried deep within the rock, along with the necessary power and communication gear. Once the requirements were properly assessed and a draft schedule was put together, the Director looked up at the Foreman.

"This is a lot of work for two teams."

"The work needs doing and two teams is what we have. You give me the orders, and my men will get it done."

Work started immediately, with controlled blasting to open the primary shaft. Everything had to be achieved with minimal sensor signatures, to avoid detection. Dust had to be contained before it could form plumes, rubble had to be cleared without altering the albedo or profile of YBH-349, and electromagnetic footprints meant that heavy machinery simply hadn't been included in the mission package. The most physical tasks were assigned to the small contingent of Civire loadjacks, whose brute strength and near-endless stamina meant they could "shear, shore and shovel" at twice the rate managed by the Deteis technicians that made up the bulk of the workforce.

And so they worked - and every man worked. The work teams of course were the backbone of the operation and carried the bulk of the load. The Foreman worked just as hard, directing with one hand and shovelling rock with the other. The Navy officers donned overalls and helped with laying and shoring. And the Director was everywhere at once, watching and encouraging and reprimanding and evaluating and providing an extra pair of hands anywhere they were wanted. As the Foreman had said, the work needed doing.

Eventually the shafts were finished and the final phase of excavations began, hollowing out the chambers that would eventually house the equipment at the heart of the project. That evening the Foreman pulled the Director aside.

"My loadjacks are exhausted, and exhausted men make mistakes. When they come off shift tonight I want to give them a two-shift rest."

The Director considered this. "If we skip a shift excavation completion will slip, and we're already behind the original schedule."

"A cave-in will put us even further behind."

"Understood." The Director sighed. "OK, assign each loadjack a technician to shadow them at all times to watch for mistakes, and keep them working non-stop until the work is done. Once excavation completes they'll have time to rest."

The Foreman nodded slowly. "Very well. If we push them hard and nothing goes wrong we could be finished by breakfast."

When the morning meal came around, the loadjacks sat down with mixed emotions. Their work was finished, but three of their number were unable to join them at the table.

Emplacement began later in the morning, with equipment being shifted into the finished chambers, sealed to the walls and floors, and painstakingly linked together and brought up to operating status. While not as physically exhausting as the digging, the fatigue of manipulating complicated electronics in cramped, low-G conditions began to show as the days dragged on. Mistakes were made, but they were caught and corrected. Eventually everything was in place and the heart of the machine, their single specialized Fluid Router, was gently removed from storage, brought down to the central chamber and carefully installed. With that done, the generators were brought online and the listening post slowly powered up.

Initial diagnostics revealed two important pieces of information. The first was that the operation had been a success - despite the loss of a significant number of personnel including a third of the workteams, the operation commander and most of the planning staff, everything worked perfectly and detailed sensor data were being successfully transmitted back to Naval Command. The second was that in spite of all their precautions, the Gallente had somehow located them and an escorted Marine transport would land on YHB-349 within the next few hours.

The option of surrendering was raised and immediately discarded without further discussion. If the work was worth doing, it was worth fighting for. With the help of the Navy personnel, defensive plans were drawn up, schedules made and tasks assigned. While the acting captain returned to the ship with several technicians to break out the emergency weapons stores, salvage any useful equipment and destroy the rest, the loadjacks began constructing fortified positions around and down the length of the main shaft, and technicians began retrofitting their tools to serve as makeshift weapons. By the time the landing craft's exhaust flares were visible, everyone was ready.

The ship smacked down near the abandoned habitation site, and armored troopers swiftly slithered out of its egress ports. At the head of the shaft, the Director, the Foreman and the Naval crew hunkered in their command foxhole and watched them approach. The technicians and loadjacks around them had clear orders; as the first hostiles passed an innocuous pile of stones, weapons were swung out over the tops of their trenches and the shooting started. Several Marines went down in the initial volley, but then they were at the first trench, down into it and then back out again, many of them with dented and bloodied armor. The Foreman checked her railgun one last time and looked across at the Director.

"For the State," she reminded him, and rose to a firing position.

"For the State," he echoed, with a grim smile.