After mastering the technique of wormhole creation, it was thought that distance had finally been conquered. But despite of this communication still needed to be transmitted at the speed of light, and though wormhole did shorten distances between distant regions, interactive communication remained impossible. This problem was quickly identified as being one of the most important handicap remaining in the conquest of deep space.

The Amarrians were the first to master the jump gate technology and thus the first to face the problem. They launched massive state-funded research and tried out several radical solutions, but without success. In the end they stopped all research, accepting the fact that FTL communications were unattainable. 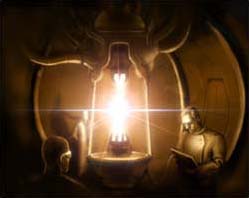 Like the Amarrians before them many solutions were tried out, but none with success. Finally it was a young Gallentean woman, Li Azbel, who came out with a solution that was so simple but yet deeply rooted in arcane physics, that at first it was rejected as a hoax.

It wasn't until the famous Azbel-Wuthrich experiment that the functionality was demonstrated with success. Industrialization quickly followed, leading to one of the greatest stock market surge ever as thousands of companies extended their reach to the whole known universe.

The roots of the solution lay in an ancient paradox, often called the EPR paradox, the name shrouded in mystery. The EPR paradox is famous for contradicting quantum physics in some very important ways. Specifically it shows another old physic theory, the Heisenberg Uncertainty Principle, to be untrue. The Heisenberg Uncertainty Principle, believed to be named after a place or a person, affirms that the exact state of quantum particle cannot be determined with full accuracy, no matter how refined the measurement equipment is. The classical example being the measurement of the velocity and position of a free particle: to be able to measure the position of a particle you must be able to 'see' it. This means that you have to illuminate it at least with one photon. But the collision between the photon and the particle changes the velocity of the particle, thus making it impossible to determine what the velocity was before the position was measured. 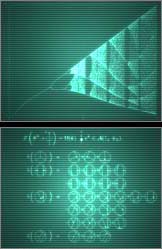 The EPR paradox describes the possibility of creating a pair of particle whose quantum state was entangled in such a way as to be mirror of each other. For example a pair or particle with position and velocity given as (x0,v) and (x0,-v), i.e. a pair of particle that at given time are at the same position, but have exactly opposed velocity vectors. After some time, the two particles would be separated by a large distance, and measurement could be done on each of them independently. Now by measuring, say, the position of particle A and the velocity of particle B, the EPR paradox states that you would thus have determined the exact state of both particles, thus violating the Heisenberg relationship.

But later experiments confirmed the Heisenberg principle, thus making the EPR paradox void, to the surprise of many. Mathematically, this didn't cause any problems as the collapse of the wave function due to measurement was an instantaneous happening. From a physical point of view, this was more difficult to comprehend, as it seemed to imply that the state change propagated instantly between the two particles. This was immediately suggested as a way to create faster-than-light communication: by making a measurement on a particle it would lead to an instantaneous change in the remote particle's state, thus transmitting one bit of information. A detailed mathematical analysis of this scenario though showed that due to the statistical nature of the quantum particle, only noise would be transmitted, thus laying to rest these speculations for millenniums.

This is precisely where Li Azbel took up the problem, with a rare insight leading to a breakthrough. She argued that even though the output of the transmission was pure noise, the structure of the noise could be used to encode the information. Indeed, it was well known that the bifurcation cascade leading to purely chaotic time-series had a universal structure, governed by the Feigenbaum constant. Taking a parametric family of functions called logistic maps, defined in the interval [0,1], there existed a parameter and an initial condition of the map that could generate any arbitrary random sequence of number. Azbel considered the problem from the other side, i.e. given a finite chaotic sequence, how could you trace yourself back to the initial condition? By using a maximum entropy analysis on the Shannon information entropy of the signal she devised a way to solve this inverse problem. Furthermore, she demonstrated that by carefully modulating the measurements of tangled quantum states, basically willfully introducing noise in the measurement process itself, that specific noise structure would be carried across to the measurements of the other particle.

The process was thus the following: A byte of information is mapped on an initial condition of the logistic map leading to a chaotic attractor. This noisy sequence is then used to modulate the measurements done on a sequence of entangled particles. At the same time on the other side, measurements are made on the particles and a noise sequence is extracted. Maximum entropy analysis is then done to determine the initial condition from which this series has been generated and thus map it back to a given byte of information. Note that in this case, the noisy sequence sent is totally uncorrelated to the one measured. What they do have in common is to be from the same chaotic attractor, and that is the information that actually gets transmitted instantly, regardless of distance.

As stated before, this theoretical result was originally considered to be too incredible, to be true. The Azbel-Wuthrich experiment used a very similar setup as the ancient Aspect experiment, and it was a historical moment when the first Smiley :-) was sent over this channel. Following that, a great gold-rush started on who would be the first to industrialize this.

The result of that rush is the familiar Fluid router, which forms the building block of universal communication as we know it today. Ignoring the mathematical intricacies, the architecture of these routers is deceivingly simple. The first step of their manufacturing is the creation of the entangled quantum states. This is done by using superfluid 4-Helium, where essentially all the Helium atoms are entangled in a single quantum state due to Bose condensation. A droplet of such liquid 4-Helium is then carefully separated in two. From this point, the two droplets, and more specifically the Helium atoms in the droplets are intrinsically tangled. Each droplet is then placed in separate router box, that contain necessary mechanism to encode and decode bytestream into quantum state measurements performed on the atoms of the droplet. From that point on, these two routers are linked together, regardless of their separation. Thus a spaceship will usually buy a router pair from a network provider. One box will be placed in the spaceship, while the other one kept in the network provider’s backbone, that will have connections to other routers, thus effectively forming a decentralized network, where messages can be routed across many routers and many providers. This architecture is similarly to the ancient Internet.

The only limitations of this communication system is in the capacity of the channel. Indeed, the manufacturing of the entangled 4-He superfluid is an expensive process. Furthermore, a large number of atoms are used for each byte, as a statistically relevant chaotic sequence needs to be created. The sequencing introduces a limit to the bandwidth, allowing only the transmission of x bytes/second. The amount of data sent then depletes the pool of available entangled atoms, thus limiting the total amount of data that can be sent with a given router pair.

The FTL communication services have spread to every corner of the world of EVE since they first appeared a couple of centuries ago. The services and routers, albeit owned and run by independent companies, are under constant scrutiny and regulations by a CONCORD sub-committee to enforce both security and privacy in the communications channels and to make sure the companies are correctly rendering the services they claim. The fierce competition on the telecommunication market makes it cheap, efficient and reliable to talk, transfer data and even conduct business for people light-years apart.