The Scope's Galactic Hour with Ret Gloriaxx brings your roundup of the latest news from around the cluster as new routes between the stars open across New Eden, and the core empires continue to focus on security and rebuilding.

Yulai, Genesis – New stargate routes were opened by each of the core empires yesterday, following final assembly work facilitated by the operations of each empire's logistics service and capsuleers participating in resource gathering operations. The activation of the new routes took place simultaneously as agreed under the Stargates Enabling Treaty (SCC Oversight, Navigation & Funding) YC123 signed by the CONCORD powers.

Activation of the new gates was achieved without major incident, although localized space-time topology effects inhibited the use of microwarpdrive engines for some hours following the establishment of the gate links. Some have speculated that the simultaneous activation of four gate pairs combined with the disruption to New Eden's background space-time topology caused by Triglavian stellar manipulation could have caused such unforeseen effects. Gate crews reported normal operations of the gates themselves and so far there have been no reports of abnormal Triglavian activity in the gate systems. 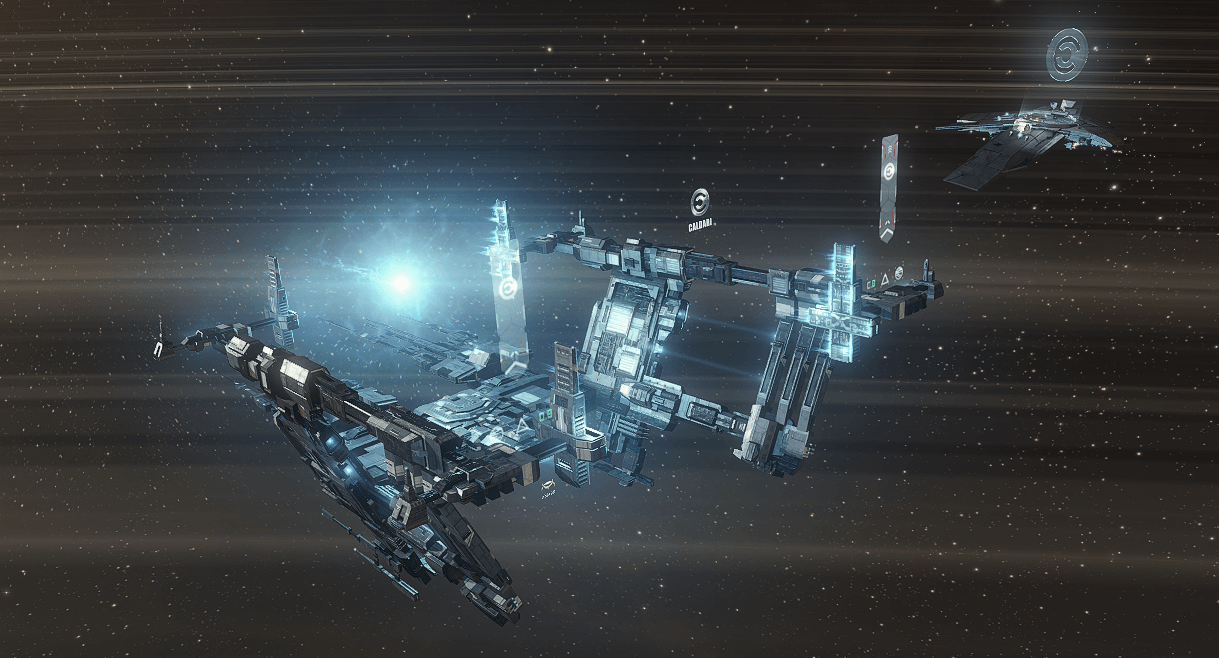 Above: New Caldari stargate with rings of Abhazon VIII in background

New Caldari Prime – Deadlock on the Caldari State's Chief Executive Panel was broken this morning with the appointment of Akimaka Saraki as acting Chairperson of the CEP. The ruling council of Caldari State megacorporations has been without a chairperson since CEP Chair Puok Kossinen was injured in the bombing of the CEP Spire in Landfall City on New Caldari Prime.

The appointment of acting Chair Saraki is a coup for the Ocean Faction of Hyasyoda, Ishukone and Wiyrkomi corporations, representing a deal that saw the Mountain Faction of Kaalakiota and Sukuuvestaa agree to back an appointee from the Wiyrkomi megacorporation. Most recently serving as Caldari State delegate to the CONCORD Inner Circle, Saraki was notable in helping avert a major conflict due to the Equilibrium of Mankind crisis. His service during the Triglavian Invasions is also held to be a distinct advantage, with his role overseeing the fortification of Wiyrkomi holdings in the Samanuni system and personal command of the planetary defense of the sixth planet contributing to the successful repulsion of Triglavian forces.

Akimaka Saraki is also the son-in-law of Akari Seituoda, retired CEO of Wiyrkomi-Seituoda Heavy Industries and a member of the dynasty that controls the Wiyrkomi megacorporation. Akari Seituoda has been outspoken in his acknowledgement of the basis for worker grievances during the recent unrest in the State, and Saraki is known to be sympathetic to those outraged by the failings of the military and corporate security forces.

The appointment of Saraki as acting CEP Chair may indicate that the Ocean Faction has persuaded the stability- and security-oriented Mountain Faction to take a path of reform and reconciliation with aggrieved worker populations. Regardless of whether that is so, the Forest Faction of CBD, Lai Dai and NOH has undoubtedly been dealt a blow, and may have to tread carefully to avoid the Ocean-Mountain axis solidifying into a permanent alliance.

Above: New Gallente stargate in Eggheron patrolled by Federation Customs

Villore, Essence – The Gallente Federation Senate has pass a new bill enhancing the federal infrastructure budget and making new appropriations specifically for security projects aimed at fulfilling the promises of President Celes Aguard to "unify periphery and core of the Federation through concrete action."

The passage of the bill is believed to have been contingent on the backing of powerful blocs emphasizing the independence of planetary states and nations within the Federation. There are rumors that President Aguard has agreed to veto the so-called "Bellaron Bill" to abolish and outlaw capital punishment as a concession to these political forces.

Senator Suvio Bellaron's capital punishment abolition bill passed the full senate before the election of President Aguard, becoming an election issue when President Jacus Roden opted to leave the decision of enactment or veto to his successor. Since President Aguard's election the bill has been the subject of a study into the "feasibility of implementation in consideration of the social, cultural and political independence of member states" at the President's request. Senate procedure committees have regularly voted to keep the bill "active" to avoid it falling into abeyance for lack of enactment.

President Celes Aguard may have been able to parlay her promises for infrastructure and security investment to some of the more liberal senate blocs into their acquiescence on the capital punishment matter. Senator Bellaron appears to have lost the argument with his political allies from Intaki and greater Placid, together with some of the Labor-Populist bloc. Seen to vote for the abolition bill procedurally, these groups were evidently unwilling to hold up the infrastructure bill, effectively freeing President Aguard to veto the capital punishment measures.

Matar, Pator – Minmatar Republic security dominated the latest meeting of the Tribal Council with measures to combat renegade warclones, fund more clandestine operations, and raise new volunteer armies for the defense of Floseswin IV, and liberation of Skarkon and Krirald. Despite a lengthy session that observers described as "heated at times" the package of measures gained the consent of the entire Tribal Council.

Chief Acassa Midular of the Sebiestor Tribe expressed her concerns at an "ever-expanding security state that imperils the freedoms and rights of our clans and tribes", and was joined in many of her objections to several initial proposals by Chief Eleca Valkanir of the Nefantar, Chief Jeoran Setul of the Starkmanir, and Chief Isardsund Urbral of the Vherokior. The Brutor Tribe's Chief Wkumi Pol also objected specifically to CONCORD agencies being given increased powers within tribal territories.

Rejection of sweeping rights for CONCORD's SARO "Red Troop" Anti-Warclone and DERAIL Anti-AI units to enter tribal and clan territories "under Republic Security Services supervision" was inevitable with five tribes objecting to such measures. However, Chief Tenerhaddi Dykon of the Krusual and Chief Einar Aeboul of the Thukker were able to win the day on enhanced investigatory powers for the RSS Anti-Warclone units. The Brutor and Starkmanir Tribes were persuaded of this need by the rise in renegade warclones "associating with Amarr and Triglavian slavers and invaders".

Funding for clandestine units able to operate against increasing pirate and illegal slaver operations, as well as infiltrate occupied territories in Pochven and the militia warzones, was less controversial. The Council also passed funding and enabling measures to provide for raising further volunteer armies for the defense of Floseswin IV, liberation of Skarkon and Krirald, and support of militia and liberation operations generally.

Amarr Prime – Despite limited external comment and numerous key cities remaining closed to outsiders, it is clear that the Amarr Empire's campaign against internal dissent and heresy continues unabated. The Scope's own sources suggest that the work of the Ministry of Internal Order, Theology Council, and Order of St. Tetrimon is actually increasing in intensity. The Royal Houses of Amarr and all Major Houses are prosecuting their own vigorous campaigns, while the Minor Holder Houses are allegedly "competing with one another to profess their faith and total loyalty to the Throne of Holy Amarr."

The signs are that the ongoing campaign is the largest and most intense hunt for heretics and purge of disloyal elements within the Amarr Empire since the military action against the so-called "Refusards", during the reign of Empress Jamyl I. The MIO, Theology Council and, extraordinarily, the Order of St. Tetrimon have been given powers to draw forces from local militias and significant authority over Major House troops. They are also empowered to request Royal House and Imperial Guard forces be deployed. Leaving no stone unturned, the various ministries, councils and orders have also been given authority to investigate one another under supervision of the Privy Council. This last measure is perhaps the clearest signal of how seriously the Amarr Empire is taking the hunt in the aftermath of the EOM crisis and following years of heretic outrages seeming to go unchecked.

President Celes Aguard is understood to have made it a priority to arrive at an agreement that "respects the rights and privileges of the Intaki Assembly while protecting the security of the Federation," according to a source close to the talks. Another source has indicated to the Galactic Hour with Ret Gloriaxx that Intaki senate support for the President's infrastructure bill was a "factor that helped break the deadlock." 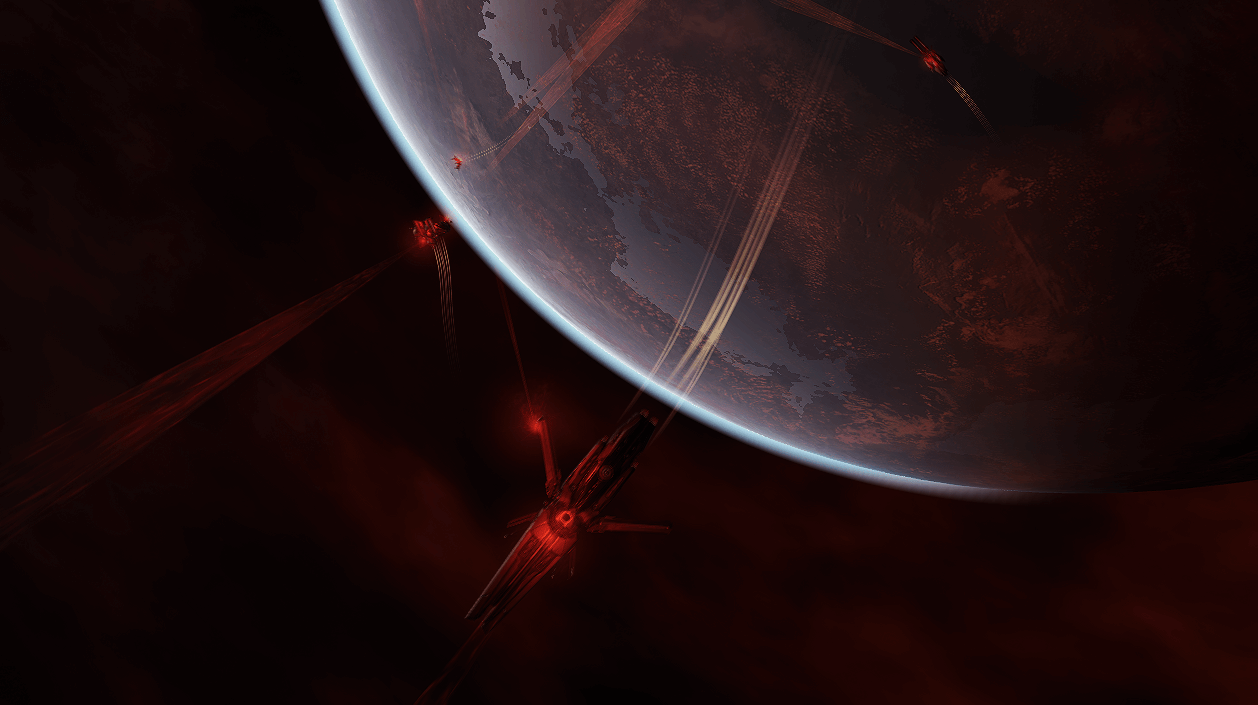 Above: Skarkon II under Triglavian occupation

Skarkon, Pochven – Triglavian inter-clade warfare between the Svarog and Veles Clades has been reported once more to have increased in intensity and expanded across the ravaged planet. Reports from observers on Skarkon suggest the latest phase of conflict between the warring clades has literally spilled over into the seas of Skarkon II. Littoral zones and the continental shelf waters of the major seas have been the scenes of furious Svarog Clade activity in response to large numbers of "drops" of unknown cargo into the sea by Veles Clade ships. A degree of retreat from previous land zones overrun by the Svarog has ensued as the occupation force has redistributed forces to deal with the new aquatic front.

Relatively untouched population centers in the hinterlands of the primary landmass are reported to be using the unexpected breathing space to continue evacuation where possible and fortification underground where impractical. The original major cities of the Skarkon II urban-industrial district of Skardisaad are largely abandoned by civilians but continue to be the scene of fierce fighting between the Skarkon Tribal Resistance Army, renegade warclones, and significant numbers of Svarog war machines overseen by "Siege Elites", a term that has come to be universally applied to Svarog's mechanized and heavy infantry troikas.

As Skarkon II continues to live up to its long reputation as the "Snake Pit of New Eden", capsuleers are on the move across Pochven with self-styled "kybernaut" supporters of the Triglavians in conflict with empire and EDENCOM loyalist forces. Independent capsuleer corporations and alliances are also increasingly struggling for some degree of supremacy in the Triglavian region since "ideological proving" lock outs on most conduit gates were lifted. Increasing conflict between the Triglavian Clades has been speculated to have led the Convocation of Triglav to dispense with the lock outs on all but the "home systems" of each clade. Others claim AEGIS information warfare commandos sabotaged the lock out systems but have no explanation for why the Triglavians have not seen fit to restore them.

Parses, Khanid – While participating in the general Amarr Empire purge of heresy, the Khanid Kingdom continues to take the opportunity to clamp down in territories seen as less than loyal to the authority of King Farokh Khanid III and his vassal nobles. Large numbers of the feared Chesm Khan secret police and their powerful security troop divisions have been deployed across the Kingdom, backed by detachments of the King's own Royal Guard in several instances. Particularly problematic holdouts of "disloyalty and impiety against the order of things" have seen landings of the even more feared Asbara Cyber Knights, military units renowned for dispassionate brutality across the Kingdom. The notorious 7th Asbara Cyber Knights under Sardar Marshal Soshan Fayez are reported to have landed in force on Bashyam IV in the Royal Duchy of Fekhoya to "crush all rebellion be it in action, word or symbol."

Fekhoya is a direct holding of the Royal House of Khanid but is reported to be a center for so-called "One Crown Unificationists", a movement backing claimants of Holder authority said to flow directly from the Emperor Family and Throne of Amarr. Such politics are highly incendiary within the Kingdom but have been growing in the years since the Khanid state rejoined Amarr as a "Kingdom of the Empire". Ironically, the theological and political basis of the One Crown movement is reportedly in conflict with the doctrines of Royal Demesnes and the Privy Council within the Imperial Rite. The Khanid House has thus used the current atmosphere within the Amarr Empire to purge its disaffected elements.