The Scope's Galactic Hour with Ret Gloriaxx brings your roundup of the latest news from around the cluster as the CONCORD powers begin new stargate construction projects, while mopping up of the Equilibrium of Mankind terrorist cult continues in the core empires.

Yulai, Genesis - New stargate construction efforts are underway in locations across New Eden following the signing of a new treaty between the CONCORD powers providing for funding, navigation rights and trade agreements relevant to the new links. Negotiations between the four core empires and CONCORD are understood to have been carried out in some secrecy over the last few months owing to the political situation in several of the empires being "fraught", as one source close to the process put it.

The Gallente Federation was the only empire to have openly signalled its intent to build a new stargate as a direct connection between the Solitude region and the main contiguous territory of the Federation. As a longstanding campaign promise of President Celes Aguard, the Federation had been clear that it would proceed with what amounts to an internal territorial link, and observe the provisions of the Yulai Accords and Convention in doing so. Its planned link will establish paired stargates in Kenninck, Placid and Eggheron, Solitude. From the Federation's point of view the effect of such a gate connection will be to bypass the nullsec Intaki Syndicate, and offer an alternative to the lengthy route via Genesis and Aridia.

The other core empires had been known to be at least exploring various mooted stargate projects, with the most anticipated being the restoration of a direct civilian stargate link between the Amarr Empire and the Caldari State. With the loss of the Amarr system of Niarja to the Triglavian Collective, the previous link had been severed and a new program of surveying for viable new links has evidently been carried out by both the Empire and State. It is reported that many previously viable connections from the Caldari State to Amarr Empire have become "dangerously unstable", apparently an effect of the large number of systems in Caldari territory affected by Triglavian stellar manipulation. A link between Hykotta in the Forge and Ahbazon in Genesis had been established as the best candidate, and work is now underway in both systems. 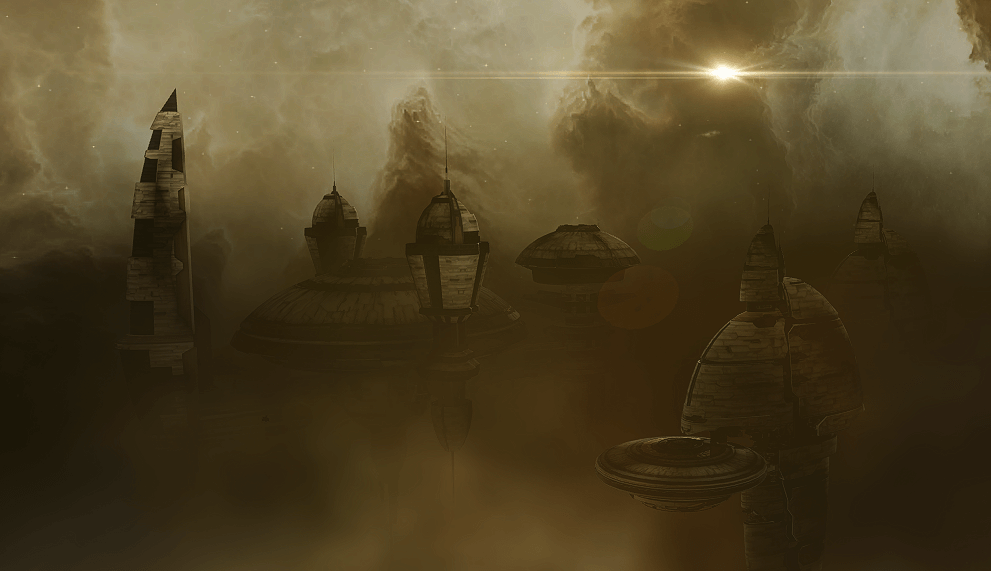 As well as strongly backing politically and in some measure financially assisting the Caldari State's stargate project, the Amarr Empire has chosen to expand its options at its periphery with a construction program that will connect Saminer, Tash-Murkon with F7-ICZ, Stain. Personally ordered by Empress Catiz I, the connection will open the way from the territory of House Tash-Murkon to yet more outer regions. Observers of Imperial court politics have noted that Empress Catiz has positioned the Royal House of her birth at the leading edge of future Amarr expansion through its control of rights over the Providence region and the new stargate project to the Stain region. Saminer system itself holds particular significance for the Tash-Murkon Family as the site of the ruined Traumark Installation that served as a guardian fortress on the edges of their territory before it was destroyed by Sansha's Nation.

The Minmatar stargate project has perhaps been the greatest surprise to observers of interstellar relations, with the construction of a stargate from Irgrus in Metropolis to Pakhshi in Genesis set to establish a direct route from the Minmatar Republic to the CONCORD-administered Sanctum constellation. While memories of the "Elder Fleet" assault on the CONCORD headquarters in YC110 are still strong for many, the last decade of Minmatar diplomacy has largely been supportive of CONCORD. While CONCORD is viewed with suspicion by large numbers of Minmatar, as many others appear to consider it a broadly positive force by the evidence of opinion polling. This balanced view is in contrast with a growing belief among the Minmatar public that EDENCOM is an "Amarr conspiracy" ultimately aimed at seizing Minmatar territories. 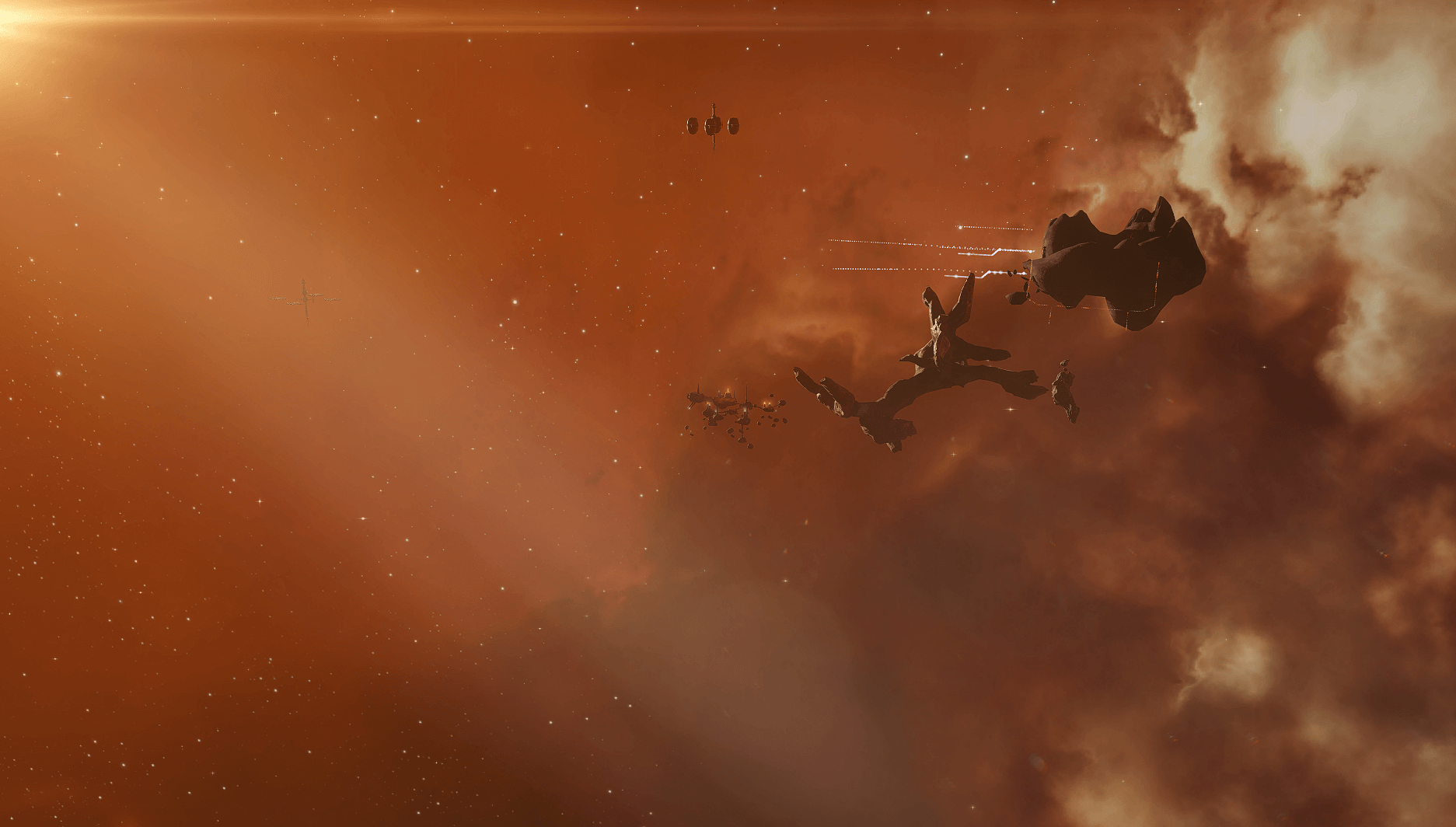 The particular choice of a Minmatar stargate link from Irgrus to Pakhshi appears to have been pushed by the powerful Sebiestor Tribe with the support of the Vherokior Tribe and Republic Justice Department. The diplomatically-minded Sebiestor and Vherokior have often emphasized the benefits of closer co-operation with CONCORD. The Republic Justice Department is also known to be keen to counter-balance the growing influence of clandestine and militarist elements in the Republic by promoting a law-enforcement and counter-terrorism approach to the problem of slave trading and raiding. Reports from sources in the Tribal Council indicate that the Sebiestor Tribe has won the right to establish a "circle" organization drawn from Sebiestor clans to operate the new stargates.

Sources with knowledge of the CONCORD Inner Circle negotiations on the "Stargates Enabling Treaty (SCC Oversight, Navigation & Funding) YC123" have confirmed that the Gallente Federation strongly backed the use of the New Eden Defense Fund as a source of general financing for the SCC elements of the project, and for a large grant to the Minmatar Republic. The Amarr Empire conditioned its support for that measure on the alleviation of existing sanctions on all traffic using the new Hykkota to Ahbazon link in their journeys regardless of their origins and endpoints. The Federation is understood to have conceded this point following the agreement of lucrative concessions for the politically influential TransStellar Shipping corporation with respect to all new stargate links. The Caldari State agreed on the condition of a similar grant for its own stargate project. While registering a formal objection to the sanctions loophole, the Minmatar Republic did not attempt to block the treaty, no doubt due to the huge financing boost its project will receive from the New Eden Defense Fund.

Yulai, Genesis - Despite the focus on the new stargates treaty, anti-EOM mopping up operations were also discussed at the CONCORD Inner Circle's latest meeting, with it being reported to the council that the DED has assessed the Equilibrium of Mankind's capital fleet and construction capability as "completely degraded beyond practical operational capabilities." The DED's Star Marshal Kjersidur Elladall also emphasized that extensive EOM infrastructure seizure operations conducted in conjunction with independent capsuleers and local navies had recovered "considerable quantities of technical data, equipment, and intelligence."

As Marshal Elladall further reported, CONCORD has extensively shared its analysis of recovered technology and data with the empires, "in compliance with the Yulai Accords and most importantly to facilitate development of counter-measures and security advancements for the cynosural navigation and counter-cynosural defense nets of the CONCORD signatory states." The DED Star Marshal also commented on the status of Kahah III, the Khanid Kingdom planet struck by multiple directed-energy doomsday blasts from an EOM Avatar-class Titan. "DED and other CONCORD agencies naturally offered all assistance to Khanid authorities but security forces there opted to close the planet and decline this offer. We understand that the planet's climate is well on the way to stabilizing but it is clear that widespread devastation was caused by the weapon strikes themselves, together with multiple powerful supercell storms induced by the massive localized energies introduced to the planetary atmosphere."

With the destruction of the main force and capability of the EOM terror fleets, the primary focus of the empires has been on operations to counter the ongoing threat of infiltrators and terrorist cells. The Gallente Federation's FIO is engaged in an extensive effort with other federal and member state security forces to determine the extent of EOM infiltration. While much media attention has been focused on the possibility that the EOM were responsible for the YC122 election attacks, that has been downplayed by the investigative commission chaired by former president Souro Foiritan. For his own part, Chief Director Mentas Blaque of the FIO has issued no comment while General Thoun Gaterou of the Special Department of Internal Investigations continues the hunt for EOM operatives.

The Amarr Empire has been characteristically silent as to the internal security measures it is taking but reports from across its vast territories indicate a massive "righteous purge of abominable heresy" being orchestrated by multiple agencies, including the Imperial Guard, Theology Council, Ministry of Internal Order, and the Order of St. Tetrimon. Unconfirmed reports claim the entire establishment and estates of the Fraternity of St. Venefice have been seized. Many previously tolerated "heterodox" cults, orders and societies have also been subjected to various levels of investigation, seizure and suppression. The police and militias of the Royal and Major Holder Houses of Amarr are also carrying out extensive hunts for EOM infiltration. The hunt to capture or establish the fate of infamous Khanid warlord and EOM agent Alar Chakaid is also believed to be a top priority for multiple agencies of the Amarr Empire.

The Minmatar Republic continues to focus its efforts on the "Black Dagger" murders and terrorist outrages it believes to be linked to the EOM's campaign to destabilize the cluster and pitch it into war. The RJD, RSS and all individual tribes' marshal and police organizations have been directed by the Tribal Council to fully co-operate on the investigation and hunt for EOM terrorists. Caldari State investigations have been disrupted by considerable administrative chaos and a distinct lack of co-operation between megacorporations as a factional struggle for power in the State appears to be heating up. Throughout the crisis and aftermath, CONCORD agencies have been notably present across all the empires in "co-operative and liaison roles" with the increased presence of such notorious security forces as SARO and DERAIL seemingly tolerated alongside AEGIS and the traditional DED police missions.

Above: Battle to Stop EOM Terror Attack Over Kahah III

New Caldari Prime - The Caldari State's emergency measures in the wake of the New Caldari Prime CEP spire bombing continue to be in effect as the aftermath of the terrorist attack remains unresolved. Despite having multiple offsite and offworld clone backups, CEP Chair Puok Kossinen has not returned to his post due to the recovery of his living body in the wreckage of CEP Spire. In an apparent fluke, the CEP Chair survived the bombing but is reportedly in "a deep coma with indications of significant brain trauma." While Kossinen is reported as likely to recover after extensive therapy, the irony of his survival preventing a backup clone activation has had real effects on the Caldari State's crisis wracked politics.

The "Big 8" megacorporations are reported to be in "deadlock" as to a way forward for the CEP, with the powerful "Mountain Faction" of Kaalakiota and Sukuuvestaa apparently undecided between themselves as to which candidate to back for a provisional or even new permanent CEP Chair. The diametrically opposed "Ocean" (Ishukone, Hyasyoda, and Wiyrkomi) and "Forest" (CBD, Lai Dai, and NOH) factions lack the votes to push their own favored candidates. Reports of incidents involving "rioter vandalism" or "corporate security abuses" continue to be exchanged by worker and executive groups on various Caldari State communications channels despite the state of emergency, adding to a widespread sense that the "Big 8" have lost control.

Skarkon, Pochven - War-torn Skarkon II continues to suffer the ravages of high-intensity warfare as the Triglavian Veles and Svarog Clades continue to wage apparently unrestrained war against one another for control of the planet. The reason that Veles Clade places such importance on contesting control of regions of a planet that lies outside its "Krai Veles" zone within Pochven, and firmly within "Krai Svarog", remains a mystery but their forces continue to assault Svarog positions despite a relatively limited presence.