The Scope's Galactic Hour with Ret Gloriaxx brings your roundup of the latest news from all across New Eden as the Drifters assault a wide spread of nullsec systems and are reported sieging multiple capsuleer structures.

Yulai, Genesis - Drifter strike forces have been attacking at least 70 star systems, spread across the Outer Regions of New Eden's nullsec space, for the last two days, reports the Scope's Alton Haveri. Accounts from nullsec have confirmed assaults by multiple Drifter fleets in over 20 regions. Areas as far apart as Period Basis and Cobalt Edge have been struck by raiding forces of Drifter cruisers and battleships, with every quadrant of the Outer Regions suffering multiple and repeated attacks.

CONCORD has only commented that it is "aware of the situation and monitoring developments", while neither the Directive Enforcement Department's Star Marshal Kjersidur Elladall nor the AEGIS devision's Provost Marshal Kasiha Valkanir would respond to requests for interviews or comment on the sudden Drifter attacks. Sources within the DED have indicated to the Scope's Galactic Hour with Ret Gloriaxx that CONCORD's military, law enforcement and security forces are entirely focused on the Triglavian invasion in the core regions.

As one anonymous source commented to Ret Gloriaxx, "After all, we're concerned with the safety of decent citizens of civilized worlds. These capsuleer warlords and pirate groups don't respect the law so I guess they can look after themselves."

Luminaire, Essence - Serious tensions were raised and alerts sparked on both sides of the Caldari-Gallente border as two Triglavian invasion forces appeared to operate in tandem to create an invasion zone that stretched from the Gallente Crux constellation, across the Caldari Border Zone, and as far as the Caldari constellation of Kantanen. 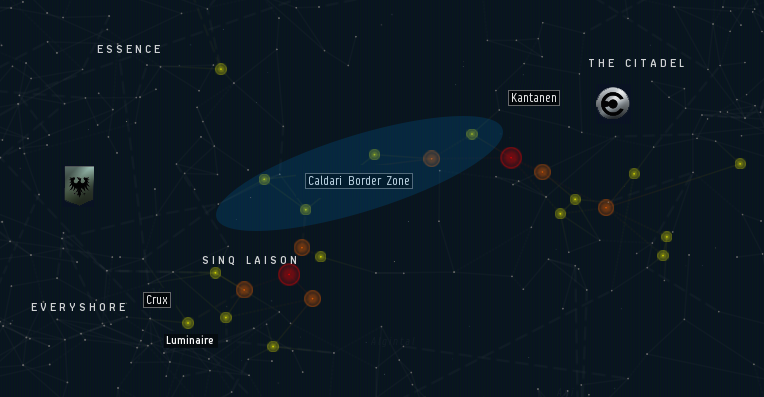 State forces in the Caldari Border Zone were already at a high level of readiness and immediately mobilized and deployed across the zone. The Caldari Navy has ordered the Kantanen reserves to stand by and corporate security forces are deploying in neighboring constellations.

In the Federation, the presence of Triglavian invasion scouts in Luminaire prompted President Jacus Roden to order the Luminaire Defense Fleet to high alert at deployed positions in the system. Gallente Prime and Caldari Prime planetary defense forces are fully mobilized and orbital defenses have been placed on a war footing. Command Admiral Auvier Bauvon of the Crux Defense Zone has moved his center of operations to Auberulle and Tripwire Operations are in effect.

The tensions at the border are acute but both empires are co-ordinating in full awareness of the common enemy. Non-capsuleer interplanetary traffic is at a minimum and capsuleers are reported to be responding across the conjoined invasion zones.

4C-B7X, Outer Ring - The Scope's Galactic Hour with Ret Gloriaxx has learned that senior figures within the Intaki Syndicate and ORE are "alarmed and concerned by the Drifter attacks" across nullsec regions close and far from their own regions. The Intaki Syndicate's Space Police are also dealing with the impact of a Triglavian invasion in neighboring Placid region, with Triglavian scouts active in the Syndicate system of PF-346.

Mining operations run or sponsored by ORE in the Outer Ring have been reduced, and in some cases withdrawn, as the Drifters indiscriminately attack any ship or structure they encounter in nullsec. The Syndicate has reported a severe slowdown in trade flowing from the Outer and Cloud Rings, and through their region to the Gallente Federation. Non-capsuleer traffic is severely restricted and the movements of capsuleers are unpredicatable as they contend with the attacking Drifters.

Maurasi, The Forge - The Ishukone Corporation has entered a formal complaint over the actions of the Onikanabo Brigade on Intaki V. Ishukone are seeking a lien to freeze Onikanabo transports and materiel still present on the planet, pending a judgment for relief on the basis that the Brigade's "corporate reparations" operations harmed the megacorporation's interests on Intaki V.

Special Corporate Counsel Majima Umokka appeared for Ishukone and entered the petition for relief before the CBT's Panel of Receivers for the "Placid Conflict Zone Franchise System." Special Counsel Umokka also attached several corporate ethics violations charges against the Onikanabo Brigade and "any clients, partners or sponsors as yet unknown and unspecified who are party to their gross criminality and abuse of corporate law." As the Scope's Galactic Hour with Ret Gloriaxx has reported, the Brigade is said to have "sacked a dozen Ida monasteries and burned down a score of attached villages and communal plantations."

The Onikanabo Brigade has not responded to the complaint or charges made by Ishukone Corporation. Latest reports from Intaki V indicate that the Brigade's convoys from the areas it allegedly raided have stopped, and its forces have withdrawn behind fortified positions surrounding the occupied Kainta Yavaat Transorbital Launch Facility.