The first Capsuleer-assembled Fortizar Citadels have arrived in New Eden, and with them, a whole new round of conflict and controversy.

The title of first onlined Fortizar Citadel goes to Hard Knocks Inc. for onlining the Hard Knocks Rental Office on May 5th located in the wormhole with the signature J115405, codenamed "RAGE".

The Fortizar is Upwell 's large Citadel. Unlike its medium sized counterpart, the Astrahus, the Fortizar model is capable of housing full Capital-sized vessels and is designed to be a primary base of operations for a medium to large alliance. 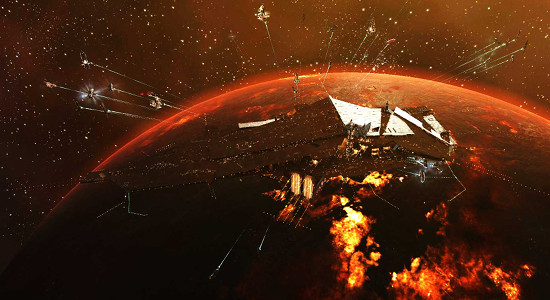 The first ever Fortizar-class Citadel getting destroyed fell victim to Hard Knocks Inc. in the wormhole system of J104859, on 11 May.

Meanwhile, Capsuleer controversy has begun circling the Upwell Consortium as concerns about their nonchalant and arguably opportunist attitude in regards to the Citadels - in spite of the thousands of colonists killed in the conflicts - has begun to disturb even some of the immortal Capsuleers.