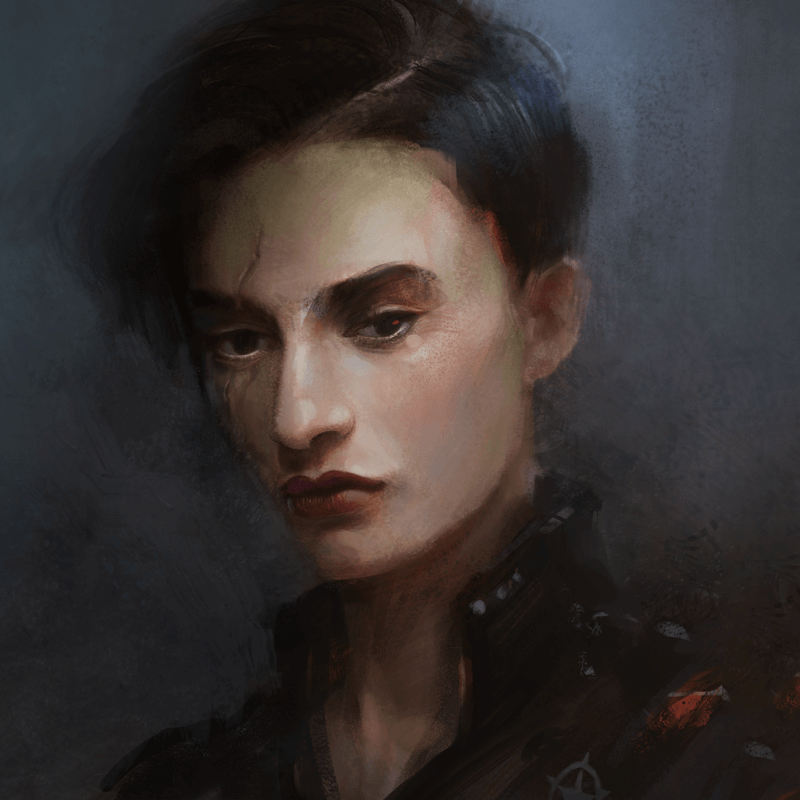 Provost Marshal Kasiha Valkanir is the head of AEGIS, CONCORD's Authority for Emergency Interdiction and Security. AEGIS was setup in YC120, in response to increasing losses of interstellar shipping thought to be caused by one or several emergent threats in New Eden. AEGIS became a key part of the response to Triglavian invasions from June YC121.

As a senior colonel, Kasiha Valkanir was a staff officer in CONCORD's Directive Enforcement Department, the interstellar police and peacekeeping force of New Eden. She is highly decorated and respected, having fought in numerous conflicts, earning many commendations and battle scars.

Before joining the general staff of the DED, she was a high-ranking field agent in SARO, one of the toughest CONCORD police units, notorious for their brutal but efficient methods. As commander of SARO's "Red Troop", a specialized counter-augment unit, Valkanir played a key role in quelling the Molden Heath Warlord uprising, earning her a promotion to senior colonel.

Valkanir was chosen to head AEGIS on the basis of her wide experience with assault and boarding actions against augmented enemies. CONCORD anticipated AEGIS forces would primarily fight highly-augmented enemies aboard spacecraft and space installations. Valkanir was made a Provost Marshal on the insistence of Captain Marshal Sirdan xer Qosh, the Amarr Empire's delegate on the Inner Circle.

Marshal Valkanir's military career before joining CONCORD was spent as an officer in the marines of the Ammatar Fleet, which she joined in YC85. Valkanir's career in the Ammatar Fleet meant she took part in several actions of the Vindication Wars between the Ammatar Mandate and the Minmatar Republic, in addition to anti-pirate duty that included clashes with the Angel Cartel and Sansha's Nation.

Eventually rising to the rank of Sardar-Captain in the Ammatar Marines, Valkanir took part in the Battle of Tears, the infamously bloody final clash of the Vindication Wars. Valkanir transferred to CONCORD in late YC105 as a loyal officer of the Ammatar Fleet's military, as part of the Mandate's contribution to CONCORD's increasing need for forces to police the newly-independent capsuleers.

Kasiha Valkanir has always displayed a strong sense of duty. She is a member of the Ammatar Church and, while known to have argued for liberal policies, she considers the Amarr Empire a force for the pursuit of a greater good. She is intelligent and often reflective with her close comrades and friends. Those who know her well realize she regrets some of the actions she has taken but it is equally clear she reconciles herself to the past through her faith and duty.

To subordinates she can appear to be almost maternal at times. However, Valkanir possesses a ruthless streak where her warmth is quickly replaced with a cold calculating callousness. Valkanir can also be arrogant to the point of stubborness, strictly adhering to points of military protocol in the face of superior orders to the point of recklesness. She can be manipulative and does not suffer fools gladly.

Colonel Valkanir is a clan cousin of Eleca Valkanir, the Chief of the Nefantar Tribe in the Minmatar Republic. Since the defection of Eleca and many other Valkanir to the Republic, Kasiha has cut ties with most Valkanir. Only the few clan members remaining loyal to the Ammatar Mandate remain as family for her. Kasiha is not the most senior of the Ammatar Valkanir but her evident loyalty and years of service have helped to shelter her kin from reprisals following the defections.