Impass - In the outlying regions of 0.0 capsuleers make a hobby of obtaining and flying the most valuable or 'shiny' ships they can possibly find. Among the vast archives of possible targets these pirates search for, none is more shiny then the Revenant-class Supercarrier, designed by Sansha's Nation to lead major incursions into Empire space. Before now it is believed that only two Capsuleer-piloted Revenants have ever been destroyed, until the recent loss of Ingeneer's Revenant in Impass. 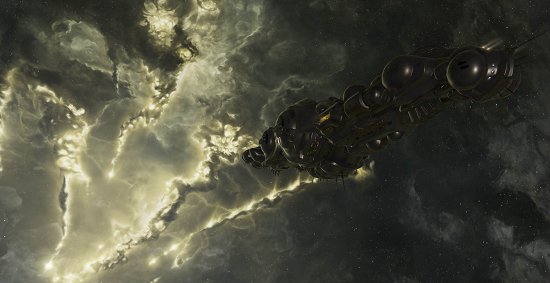 Image of a Revenant-class Supercarrier

Ingeneer, the capsuleer piloting the Revenant, had an associate positioned on a Wormhole leading to Thera as bait for the battle-hungry wormhole residents. When the would-be marauders arrived on the other side expecting a simple Archon and a support fleet at best, they received a face full of assigned Einherji's. Normally this would mean that more than one carrier was in system assigning to the Archon, but while reviewing the killboards for that day, members of Pandemic Legion noticed that there was a Revenant appearing on a number of kills in one system. Over the course of the next two months they began planning the destruction of this rarest of motherships.

While scanning out a chain of Wormhole systems, a Pandemic Legion scout discovered the system the Revenant had been in. A few PL scouts spread out around the system, where they discovered the Archon sitting off a wormhole, but could not pin down the Revenant until a scout positioned on top of one of the towers in system saw the Revenant decloak and enter warp. Expecting the Revenant to return, PL began to theorize exactly what they would need to destroy the Supercarrier before it escaped.

While the Fleet Commanders went to work discussing the tactics of the trap, the fleet members mobilized Heavy Interdiction Cruisers, Interdictors and even Titans.

"We were timing this down to the milliseconds." stated CaptainNighthawk, a capsuleer piloting a Ragnarok-class Titan. "We had titans ready, fit for max locking."

Approximately half an hour after the Revenant's partner Archon arrived, the call went out that the Revenant had returned from deadspace and was in warp back to its position outside the tower. While the Revenant was still in warp, PL called for their Heavy Interdiction Cruisers to return from deadspace as well. Cynosural fields went up where the Revenant would land and the Titans began to appear in the system, Doomsdays already warming up.

It took a mere 2 doomsday weapons to destroy the Revenant, which was fit entirely for damage output with its tank still in the cargo.

penifSMASH, the coordinator of this operation says "It was a great team effort. Everyone did their part perfectly, and im glad i had fellow nerds who were willing to stay up through the night waiting for him to [wake up]." The members of Pandemic Legion and Sniggwaffe who took part in what they called "Operation Mondodweeb" will be the capsuleers known to have destroyed the third recorded capsuleer piloted Revenant in New Eden's history to date.

Ingeneer, the Revenant pilot, told the IC he had a few beers and moved on from the loss.