The Nulli Secunda [S2N] held outpost exited its shield reinforcement cycle on the evening of the 5th at which point Darkness of Despair [-DD-] and their allies took the opportunity to drop a small capital fleet of Dreadnought class ships to push the outpost further into an armour timer.

As the hours passed the battle continued to rage as the battle participation reached over 1900 pilots. Black Legion [MEN.] entered the battle with a Dreadnought fleet at which point PL, Northern Coalition [NC.] and [S2N] committed Titans to the battle.

Goonswarm [CONDI] entered the fray nominally on the side of [-DD-] with a Dominix fleet as sub capitals laboriously worked to bump an [NC.] Erebus away from its support fleet.

After 8 hours of raging combat, system communications collapsed on both sides and the battle came to an abrupt end. Hostilities are expected to continue in the near future. No Titans were destroyed in this battle. 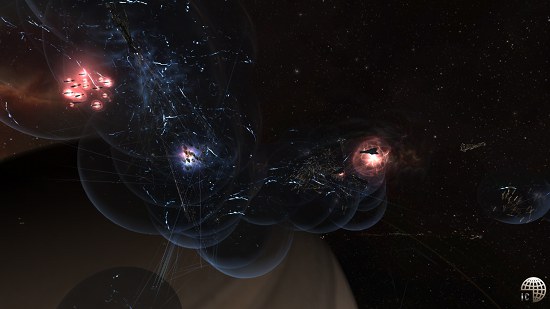