Several days ago, Darkness of Despair [-DD-] destroyed a Zombie Ninja Space Bears [ZN-SB] Territorial Claim Unit in system JAUD-V. The lack of an Infrastructure Hub in the system caused an immediate drop of [ZN-SB] sovereignty and ignited a battle which peaked at over 1,300 pilots.

Luckily for [ZN-SB], they are part of the Honeybadger Coalition, a self-appointed governing block ruling over a vast tract of south-eastern New Eden. "HBC bros are fantastic," DNLeviathan says. To their rescue came TEST Alliance Please Ignore [TEST] and Pandemic Legion [-10.0] the two "leaders" of the HBC, as well as assorted coalition members including, Raiden. [-RDN-], The Initiative. [INIT.], Tribal Band [TRIBE], Unclaimed. [TROLL] and elements of Northern Coalition. .

A [-DD-] pilot who asked only to be named as "supreme fleet commander Zumzat", explained that this engagement was intended as a trap to draw an HBC capital fleet out so they could "counterdrop with our own Super Capitals and Dreadnoughts." 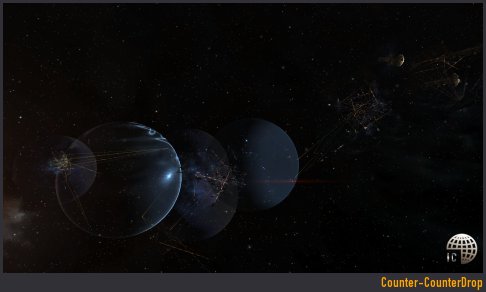 The battle began between the two sub capital fleets on the TCU, [-DD-] sporting Rokhs and supported by [C0VEN] and No Value [-X3-] AHACs, as well as <.-A-.> Bombers. The HBC had jumped in roughly 40 capitals when [-DD-] sprung their trap and committed their capital fleet to the field. This consisted of roughly "10 dreads and 10 Super Carriers to fight 40 HBC capitals." The plan was to kill as many HBC as possible and then seek refuge inside the POS shield once the "HBC batphone was in."

In the end [-DD-] claims to have destroyed around ten enemy capitals while losing the majority of their Dreadnaughts. The quick response which foiled the [-DD-] plan was believed to have been brought about by the [-10.0] intelligence network.

Speaking to Calistro of [-10.0], he claimed that BlueMajere, [-10.0] Spymaster had information that [-DD-] was planning to use their Super Capitals in an ambush. With this knowledge in hand, HBC attempted to "setup the fight just right" to end the [-DD-] incursion and destroy their super capitals.

The plan was for HBC sub capitals to bubble the [-DD-] super capital fleet as they jumped in and immediately provide a cynosural beacon for the response fleet. Unfortunately the cyno Heavy Interdictor was destroyed and a backup cyno was not in place. By the time a replacement cyno was found, it was lit on the far side of the [-DD-] Control Tower and the HBC sub capitals were unable to bump the [-DD-] capitals as they coasted into the tower shields.

All in all the battle escalated by way of a capital drop to destroy an onlining TCU, a counter drop to destroy enemy capitals and a 3rd hidden fleet meant as a response to the counter drop. [-DD-] commanders successfully protected many of their super capitals despite their ambush plan being foiled. Elise Randolph of [-10.0] was quoted as saying "this was going to be our diddle jam but mistakes were made."

A battle report can be found here.