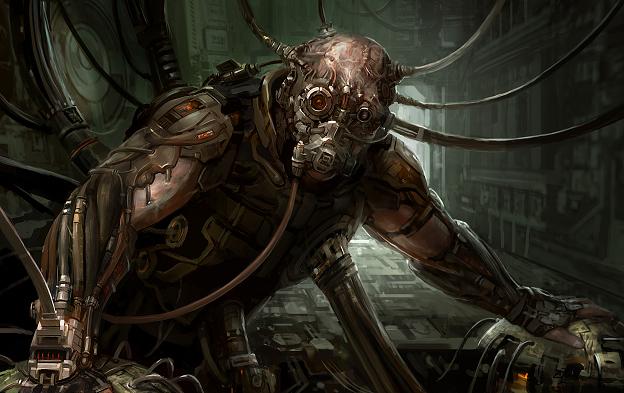 Planetary Administrator Leonalle Yvesk’s assistant, a much younger Gallente woman named Colasa, trotted up and matched his pace as he disembarked from the passenger tram. Yvesk sighed vocally. As they made their way up the ramp to street level, flowing along with the crowd of other laborers and urban professionals commuting to work during the morning hours, she remained silent. Only when they had emerged into the open and separated from the majority of the other pedestrians did she venture to initiate conversation.

“Good morning,” she began. “I hope you’re well today.” She had a polite but submissive demeanor he usually appreciated. It had taken him almost fifty years to climb to his position as the highest authority on Chesiette Prime, the first planet of the Chesiette system, a thriving temperate world with just over a billion inhabitants. Because of its position near the border between the Gallente Federation and Amarr Empire, the planet was important – on paper. In reality, the efficiency of Federation politics, combined with their peace-oriented foreign policy, had rendered many of his duties unnecessary, resulting in his being regarded by many officials as a glorified middle manager instead of a frontier diplomat.

Today, however, he found her meek, subservient manner frustrating. He was on his way to a meeting he had been dreading all month, one that he had no experience with, and despite the fact that it was finally a duty in line with his diplomatic training, he was exceedingly nervous. “What is it, Colasa?”

“I have the report you asked for on carbon compound dispersion patterns on the southern continents.” She fumbled with a small case as they walked, almost colliding with several people moving in the opposite direction.

Yvesk stared straight ahead as he walked. “Very good.”

Frowning, Colasa tucked the case back under her arm and hustled to keep up with him. “Can I ask why you seem so upset, Administrator Yvesk?” She didn’t wait for him to reply before adding: “Does it have something to do with the capsuleer?”

Yvesk stopped abruptly and grabbed her arm, drawing a startled look from his young assistant. He glanced around and shot dirty looks at all the people watching, their attentions instantly focused on the two after the last word she had spoken aloud. “I think it would be best,” he hissed, “if we kept such topics in private discussion.” When he was certain that his point had been made, as was evident by the paleness of her face, he released her and stormed off.

Nodding quickly, Colasa averted her eyes. From that point until they arrived at the conference building, she stayed a step behind the administrator, absolutely silent.

Seated in the largest chair in the observation room, Yvesk took a few moments to make sure his suit’s collar was perfect before nodding to Colasa, who was seated at a nearby holographic interface. She ran one hand over the console’s horizontal sensor, prompting the air above it to waver and coalesce into a digital readout. Reaching up and tracing one finger across the insubstantial surface of the screen, she selected the proper communications channel and turned to look at the far wall, which went entirely black, save for the blinking symbol in one corner that indicated a connection was waiting for authorization.

When an image finally appeared, it caught the administrator off guard. The capsuleer was clearly of Amarr descent, with high cheekbones and a clean-shaven scalp, but beyond the most obvious features, little of his face could be discerned. Most of his head was obscured by cybernetic implants: curved, metallic attachments that spread around his skull at every angle, completely concealing his eyes, nose, and mouth. Power and information cables stretched from each implant to somewhere off camera on either side, making it seem like he was suspended in a spider web instead of seated comfortably in a starship in orbit high above the planet.

It was only a simulacrum, an image that this person chose to portray of themselves, but it thoroughly unnerved Yvesk. He caught himself staring at the screen and covered his blunder by clearing his throat and introducing himself. “Greetings, I am Planetary Admin—”

“Leonalle Yvesk,” interrupted a thundering voice, reverberating around the room with an unearthly tone. The camera displaying the man on the screen zoomed in to show only the head and shoulders, his body twitching subtly whenever he spoke. “I am familiar with your information.”

Yvesk inhaled briefly, scratched the side of his head, then gestured to Colasa and offered, “This is my assistant, Col—”

“Your associates are not my concern.” Interpreting the capsuleer’s body language was impossible. After several moments of uncomfortable silence, the muscles in his neck convulsed briefly - it really was an unnerving illusion - and the speakers continued his statement. “I am Omvistus.”

The administrator nodded respectfully; his assistant continued to stare at the vidscreen and chew on her bottom lip absentmindedly. When it became obvious by the elongated pause in the conversation that the capsuleer wasn’t going to finish his introduction by clarifying whether the name he had offered was a first or last, Yvesk moved on to business. “As you can see, sir, we are fully prepared to begin implementing your production schedule. Our industrial sector still needs some updates and modifications, but I’m confident that in just under a year we could—”

“That is too long.” The expressionless face on the screen twisted slightly, and then the capsuleer’s voice boomed through the speakers. “I will replace your industrial sector immediately. You have one hour to evacuate all personnel before the new facilities arrive in their place.”

Yvesk paled visibly as he turned his head slowly to Colasa, who lunged for the nearest control panel and began sending out frantic messages. “We’re making preparations immediately, sir. Perhaps if you could—”

“I must say, sir,” Yvesk began indignantly, “all of this is highly irregular. If you had just included this in your previous documentation, we could have prepared adequately.”

The cables attached to Omvistus writhed as his body convulsed. “Your disquietude is counterproductive. Do I need to replace you?”

Yvesk glanced around and stuttered: “Of course not, sir.” Licking his lips as he chose his next words, Yvesk tried to change the subject. “I noticed that you have some ambitious plans for our local spaceport. Would you care to elaborate?”

Omvistus was motionless for several seconds, and then his shoulders rose slightly and his voice came through over the channel. “Your existing spaceport facility was insufficient for my needs.”

“The amount of raw materials that will need to be transported into orbit is an order of magnitude larger than what your current facilities are able to support. Additionally, I will be overseeing the construction of the seventy-two new spaceports my corporation requires, each located at key intersections across the surface of your world.”

Yvesk could feel the sweat trickling down the back of his neck and pretended to be rubbing sore muscles to wipe it away. He was relieved that Colasa was still buried in the computer terminal, desperately trying to get evacuation notices out to the industrial sector. “Sir,” he began, “while I appreciate your dedication to the development of Chesiette Prime, I feel it’s my duty to inform you that the scale of that project is far beyond our capabilities. Building that many new spaceports would cost more than the total revenue our planet generates in a year.”

Omvistus twitched. “I have just purchased all of the required materials to construct the new spaceports and arranged for them to be delivered within the next six hours. You will prepare for their arrival at once.”

The sheer amount of currency that had just changed hands before his very eyes, all in the span of a single heartbeat, left Yvesk speechless. His mind reeling with the massive numbers, he tried to find his footing once again. “I… thank you, sir. We’ll make sure the facilities are properly—”

“You will not be responsible for their assembly; that process is entirely automated.” The capsuleer’s head twisted to one side and his disembodied voice added, “All you need do is stay out of the way.”

Colasa was pleading to Yvesk with her eyes, begging for the order to send out additional evacuation warnings to any citizens who currently lived or worked in the areas designated for immediate repurposing. She pointed to her vidscreen terminal, which showed numerous glowing red warnings all over the spinning image of the planet. The administrator, however, held one hand up, instructing her to wait. “Omvistus, I must protest at this point. Most of the coordinates you designated for these additional spaceports are located in densely populated areas. It’s going to take more than a few hours to evacuate all those citizens. I demand more time!”

Omvistus was absolutely motionless. “You demand?”

Frowning and leaning closer to the screen to block out the ambient noise of the city beyond the walls of the room, Yvesk refused to backpedal on an issue so important. “We’re talking about millions of people here. I don’t think you understand the gravity of this situation,” he growled his final word, “sir.” He shot an annoyed glance at Colasa when the drone of something outside reached the point at which it was difficult to hear himself speak. “We’re going to need at least a week to relocate everyone to unaffected communities.”

“That sound you’re hearing,” Omvistus replied, “is your planet’s bombardment siren. You’ve probably never had to pay much attention to it in the past, seeing as your world is safely under the jurisdiction of CONCORD, but that is no longer the case.” As he spoke, the back window of the conference room took on a noticeably red tint, saturating the room in crimson light. “What you’re seeing now is the targeting laser used to aim my battleship’s six 425 millimeter railgun turrets. At this altitude, the gravity of your planet will augment the standard launch velocity of each solid projectile to speeds well beyond operational specifications, enough to obliterate anything within half a kilometer of the impact site.” Omvistus’s image grew larger on the screen before he continued.

“Anything between that location and two kilometers from ground zero will suffer a worse fate, as the antimatter suspended in each shell escapes its containment field and expands in a random dispersion pattern, colliding with the ambient normal matter on the ground – buildings, trees, children, everything. Whatever these particles touch will experience matter disassociation on an atomic level as, piece by piece, they are reduced to unidentifiable residual particles.” He paused briefly, and then concluded.

“With a single thought, I can reduce your entire city to a smoldering crater; the boiling wind rushing in to replace the void left behind will be laced with dust particles that were once the bodies of everyone you know and love. Do you understand?”

Yvesk looked down to see one of his hands shaking. He swallowed hard and, when next he spoke, his voice came out as a raspy whisper. “I…understand.”

“I’m sorry, Administrator Yvesk, but I’m afraid I didn’t catch your last words. Do you understand?”

The red light faded and, for the rest of the afternoon, the capsuleer spoke and the planetary administrator listened with obedience.