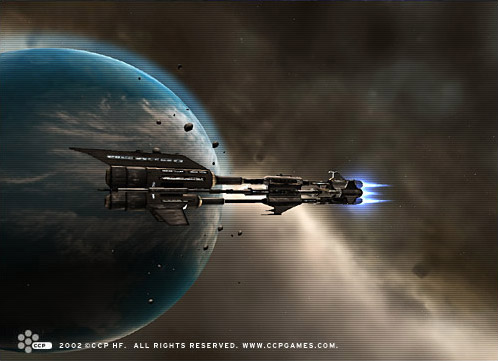 The four ships registered as red dots on Maya Arikinnen’s radar, but that didn’t deter her from activating her cargo scanner on one of them. The four frigates were manned by outlaws - characters with a track record of crimes and misdemeanors. But Maya recognized their kind by their ships and style. They were not killers, but smugglers. This didn’t make them harmless, but they were less likely to start some reckless action here in a medium secure system. At least Maya hoped so.

Torrinos system lay on the outskirts of Caldari space. Beyond there were increasingly less secure areas until one reached the Amarrian border zones some seven jumps distance. Although this route was not an official linkage point between the two empires it was still a popular path for smugglers or those wishing to travel outside the main routes. This was the reason why Maya had positioned herself here sporting her newly acquired cargo scanner, courtesy of the Custom license she’d bought from the Caldari state. Many of her friends had done this before her and all agreed that Torrinos system offered some good pickings. All she had to do was to sniff out some illegal or contraband goods and report her findings - she would then receive a part of the fine imposed on the offender by the authorities.

The cargo scanner aligned itself with the nearest of the four frigates and started its scanning process. But before it could finish it sputtered to a halt and reported a failed scan. At first Maya was sure she’d done something incorrectly, before realizing that the target ship had used an anti-scanning device on her to counter her scanning efforts. The four frigates suddenly veered off their course and now headed directly towards her. The menacing advance of the smugglers gave Maya the urge to panic and do something reckless, but she managed to get her emotions under control. The smugglers had not opened fire on her yet. Maybe they were just trying to scare her off. The leading smuggler, the one that thwarted her scanning attempt, established a com-link to her, automatically creating a new channel for them to communicate over:

“Whaddya think yur doin’?” the uncouth voice of the smuggler crackled. “Try one more time to scan us and we’ll fry your ass!” the smuggler continued. Maya ran some background checks on him. Nori Yirikai. A member of a renowned criminal organization. He had an unimpressive track record of smuggling felonies, which maybe explained his current usage of a hi-tech anti-scanning device. ‘Obviously a man that learns from experience.’ Maya thought sardonically. It was also obvious that Yirikai and his cronies were only trying to scare her away, being sensible enough not to be willing to reduce their already sorry security standings by engaging in combat here. Yet they must be carrying illegal cargo, or they wouldn’t be so concerned about being scanned.

Just to be on the safe side Maya asked two of her friends in the custom business that she knew were close by to come and join her. She then turned her ship away from the smugglers and made as to leave.

“There’s a good girl,” came the voice of Yirikai. Maya noticed he was trying to sound scornful, but it sounded more like he was relived. She began wondering what it was they were carrying that they were so anxious to keep a secret. It was tempting to provoke them by trying to scan them again once her friends got here, one of them might get through. As soon as she released that thought her friends had arrived. They quickly aligned themselves beside Maya’s ship, which she had promptly turned around.

The smugglers seemed to hesitate for a second. They were probably discussing this new turn of events among themselves. Maya and her friends formed a group, so they could retaliate in case one of them was attacked. The smugglers started aligning themselves in a combat formation. Maya began sweating. She had fervently hoped it wouldn’t have to come to this, but it was clear that the smugglers were willing to attack them to keep the identity of their cargo hidden. She began preparing her ship for the onslaught. But just as the two sides were about to let loose their weaponry a new ship appeared on the radar. A big ship. A DED ship. Maya sighed in relief.

The sudden appearance of the DED battleship quickly ended any thoughts of battle. Both sides disengaged and starting preparing to leave, all under the watchful eye of the DED ship. The channel-link with Yirikai came to live:

“You just watch it, custom officer Arikinnen. Next time, I won’t hesitate to kill you.” Yirikai said vengefully. ‘Yeah,’ Maya thought as she warped out, ‘and I would very much like to find out what you are carrying in your cargo hold.’