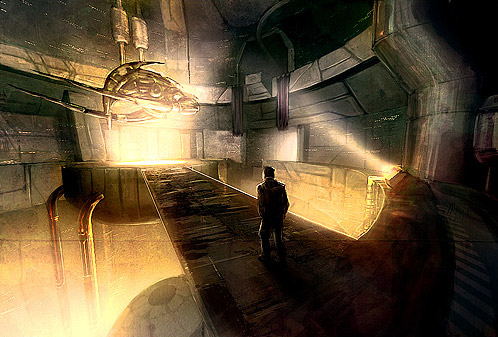 Shan stubbed his cigarette on the deck, despite the Kapitan’s earlier admonitions about in-station regulations. The old bastard was soft after his years with those paper-pushing Fed Navy pod-wetters, soft as the blubber that hung from him. Besides, with the situation the way it was today, their high and mighty Legionnaire had better things to worry about than a smudge on the platform.

Climbing into the pod and fastening himself, Shan reflected on the current state of affairs. Ever since the Alliance had been born, the smattering of independent outfits morphing and mutating into the massive, brutal beast it was today, things just hadn’t been the same in Curse. The Salvies had been the first to complain, of course – you couldn’t fart in Curse space without the Salvies getting up in arms about it – but within a month it had become clear that this new coalition was nothing to be taken lightly. Squadron after squadron of Cartel fighters had fallen to Alliance battleships as their prized ‘roid fields were slowly wrested from their grasp.

Today, every outpost not huddled like a petrified mouse in some gigantic moon’s shadow had been taken over by the CA. Testing facilities, assembly plants and munitions dumps now all played host to the behemoth. The Salvies did what they can with the left-over minerals afforded by the Cartel’s ninja miners, but many of the ships and facilities they had today were still in a sad state of disrepair.

The bay’s speaker clicked on, sending sound ricocheting off the metal walls.

As the diagnostic systems finished their run-through Shan panned his camera drone three-hundred and sixty degrees around his sharp-tusked interceptor, making a quick inspection of the craft’s gleaming hull. All in order, it seemed. Ready for another patrol.

The docking bay’s doors hissed open languidly, allowing the undiluted rays of the burning sun to wash into the chamber at an angle. Dust motes danced in the columns of light as Shan Arvonak, Angel Raider, slid out of the station’s belly into the breathless void.

It had been exactly one-hundred and thirty-eight minutes of soul-crushing boredom when the first hostiles showed up on system comms. The opening of the pores, the nearly imperceptible quickening of the pulse, the prickle along the back of his neck – Shan felt the warrior instincts flush his system. As had become his custom, using the meditation techniques he had culled from the dog-eared Adakul text he kept hidden away in his footlocker, the young Raider stilled himself.

“Saddle up, boys.” came the Kapitan’s voice over the comm. “We’ve got two Black Omega.”

Shan’s composure held, but a tiny tremor shot through him like an electric jolt. Black Omega was, by now, one of the Alliance corporations known to every Arch Angel operative in the Curse region and surrounding zones of operation. They had recently colonized the belts two systems over, and stories abounded of how their security wing had rampaged through the area, decimating everything the Cartel had thrown at them while barely sustaining losses themselves.

And now they were here.

“Line formation, fellas.” The Kapitan’s voice was steady, but as Shan swiveled his camera drone to alight on the Legionnaire’s massive bulk turning slowly planetward he fancied he saw the slightest tremor, a flicker in the burners maybe, an invisible apprehension bleeding through the night, staining their resolve. Maneuvering his agile frigate into formation between the other two Raiders, he awaited the word from Central.

Twenty, maybe thirty seconds passed before the Kapitan’s voice came once more over the comm.

“Okay, we’ve got two unmonitored belts in-system, Planets II and VII. None of the patrolled belts have reported sightings yet, so we’re going in for a look. Zeta Wing is en route to Planet VII. Align yourselves for gang warp, gentlemen. Planet II, Belt 1.”

As time and space coiled into a spiraling tunnel around them, Shan promised himself that should he ever become a Legionnaire, he’d stay away from those awful group names. “Gentlemen.” “Fellas.” “Boys.” So unprofessional. So unbecoming the discipline and rigour that had made the Angel Cartel what it was – or, rather, had been before the Alliance moved into Curse.

The thought flared up in his head, overriding the nagging trepidation that had been playing at the corners of his mind. The usurpers who had spread over their domain like a cancer would this day pay for their presumption. Muttering a curse under his breath, Shan emerged out of warp.

As the warp engines died down and the fluid regulation system in his pod performed its deceleration compensation, that pleasing backwards flow of liquid over his body mingling with the ship’s gentle vibration, he saw the great checkered curve of the asteroid belt slide into view beneath him. Seconds later, his scanner picked up the hostiles.

There were two of them, both in Apocalypse-class battleships, eighty klicks away, twenty klicks from each other. Too far to get a lock. Simultaneously, the three Raiders began preemptory evasive maneuvers, waiting for the Kapitan’s word.

The seconds ticked by heavily as the smaller vessels glid back and forth while the Kapitan and his Depredator wingman fumbled for a lock on the intruders. Suddenly a feral snarl came hissing through the comm.

The words were abruptly stopped as a twisted pillar of light blinked into existence between one of the Apocs and the Kapitan’s ship. A great translucent globe came briefly into view around the craft, shimmering faintly before dissipating along with the enemy’s beam. In perfect rhythm, another gout of laser fire emerged from the other battleship, bathing the Legionnaire once more in shield-wash. In a few seconds, a macabre staccato of laser fire had established itself, all of it centered on the Kapitan.

“Go! Go! Full attack!” shouted the fat man in the big ship, his calm veneer now fully evaporated under the intense enemy bombardment. His curses now reserved for his incompetent Legionnaire, Shan slammed on his afterburners and thrust, rigid with fear, towards the distant ships firing those terrible, beautiful beams.

Fifty klicks, then forty. An explosion sounded behind him as one of his Raider companions was ripped cleanly in two by a stray beam, sending a fiery shower of metal parts arcing into the black. Thirty klicks. No time to back out now, Shan. Do your part. Trust the Cartel.

At twenty-five klicks, just as the battleships were taking form before him, he heard it: that sound, dreaded by every pilot ever to take to the spacelanes, the dreet-dreet-dreet-dreet of his sensors informing the auto-targeting systems that his vessel had just been locked. Like staring down the barrel of a cannon, thought Shan just as a distant boom sounded behind him, marking the destruction of another comrade.

And as Shan Arvonak, Angel Raider, came into firing range and saw his Howitzers’ bullets glance harmlessly off the ship he had targeted, saw the awesome bulk of the Apocalypse turn to face him like a giant gold-plated snake seconds before the light enveloped him, turning his ship into a golden ball of hell’s fire, two sudden realizations smacked into his skull, staggering in their clarity.

He, not his enemy, would die this day. And Curse space was no longer what it used to be.