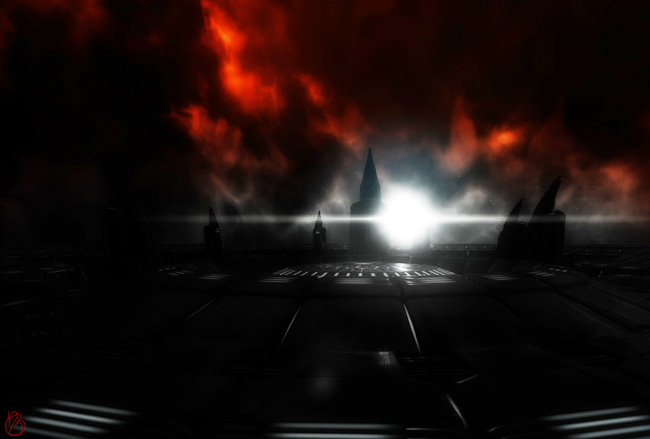 It may not make sense at first. The complexities of life's story run so deep that it may take some time to understand. Some time indeed. Yet I tell you now that time will make the truth of these words shine ever brighter, because that is what I made them to do.

She was watching the people of Seyllin die on live holovision when they came for her.

Lianda. I must warn you, my child, no matter the risk. The Senate has learned of the appearance of new, stable wormholes, leading to unknown areas of space. You must not involve yourself in this matter. There will be a time and a place for your research to continue. Please, for the sake of everything you have worked for, lie low.

They told her CreoDron had only asked for one person. On the display, a darkened and burning orb glowed in brilliant shades of blue. Millions must have been there, she thought, trapped inside a dying planet.

They said this was the kind of help that would matter more tomorrow, when today had taken what it would from them all. Strangely poetic, the ones they had decided to send for her. Most likely no coincidence. They left her there. She would follow soon, once her affairs had been set in order. Those words, and the truth of them in her eyes when she stepped towards them so purposefully,

They had bought the privacy she would need to reach him.

"How are you doing out there?"

"Professor? What you said before? We're behind you all the way."

A poignant smile formed across her face, shared only with the on-board surveillance.

The Helios stabilized as it pulled out of warp, settling for now into a cautious eighty-kilometer orbit. The gamble had paid off. Not that she had doubted her initial findings. She felt it was somehow appropriate that Vitrauze was where she found it. She had not signaled anything to them, not yet, not until she could see something.

The system of Vitrauze, to most people, had been nothing more than another cruel and lonely place off the major spacelanes of the Federation. For most people, it would remain such. That was fine with her. The best secrets had always lain in plain sight, beneath casual glances that each day saw nothing.

She saw them, though. Stripping the unknown of its mystery had been her life's work, a task as noble as it was destructive. Before her now, just a few short moments away, was one more riddle, but it wasn't one she would solve to the end. She gazed out into the twisting shapes, admiring something she felt she had seen a thousand times before in her dreams and yet only now truly saw for the first time. It was as magnificent and terrifying as anything she could have hoped for.

For those there now, Vitrauze would be remembered as the system where they found that first link to the unknown. For her, it would be where she left something. She would burn, glow like Seyllin, and in that dim luminescence that her sacrifice shed, others would see the hidden paths to tread. He would have liked it phrased that way.

The microwarpdrive engaged and eighty kilometers quickly became fifty, thirty, twenty and then, nothing. Zero point.

It had been named after an early Federation Senator, whose name in turn was supposedly taken from one of the first settlers to come through the EVE Gate. To the Amarr, "Vitra" meant simply "life." Life itself. The Gallentean understanding of the word was more subtle, however. To them it meant "living."

Different in the way sunrise and sunset are, she thought.

Six more Helioses decloaked as they dropped out of warp, falling into the same cautious long-range orbit as she had.

She stopped the thrusters for a moment, almost answering the call before deciding against it. They could wait. Even though her voice alone would mean so much, they could wait. For now, this moment was hers.

The blood immediately started pushing through her veins, accelerating with each new heartbeat. She fought back the instinct, millions of years and even more souls forfeited in the name of progress, all driving her to avoid this. To return.

"Proceed as planned. I am not here."

Within just a few moments of those words reaching the other side, the flagship of CreoDron's private fleet deactivated cloaking devices and began about the crucial task of pretending to be useful.

To most observers, "CD-1" would be considered a monstrosity. Horrifically warped Dominix hulls overflowing with esoteric electronics equipment often evoked familiar images, ones not so welcome in the heart of Federation space, particularly in recent years, and particularly when the vessel in question carried CreoDron tags.

To many of the leading scientists in CreoDron, though, it was their beloved "mothership." At times it would serve as their mobile research lab, as their home. Now it served as one incredibly risky decoy. Confiscation would mean an end to so many ongoing projects, but the weight of that also played in their favor.

The uncharacteristically dark hulls of four Megathron-class battleships suddenly appeared, sliding into the scene with a graceful menace that only the Black Eagles, with their specially commissioned ships, could project. Even before the violent tear in the fabric of space that dominated the area, gushing with its ominous crimson light, their presence was made known. The arrival alone would have its effect, but underneath it all, the official CreoDron line from that point on would remain steadfast. All contact with the other side had been lost.

Duvolle scientists had been "invited" to attend the ensuing investigation and it was they in particular who queried the absence of CreoDron's leading astrophysicist. No doubt their own interest in these matters was welcomed by the Eagles, just as Duvolle had welcomed the opportunity to see and hear things that would normally put their own operations under the Federation's ruthless self-scrutiny. These were the sorts of plays the Eagles were fast becoming known for, where saying no was made a twice-unattractive option.

The captain of the fleet understood better than most the capacities of his opponent. He would comply, but even though others made billions of ISK, these two outsiders now prying into their research would be considered by him and the rest of his crew as the very worst kind of vultures. This was how real, lasting damage was done. No press releases, no fanfare, no public comments one way or the other. Nothing would be made today but enemies.

As CD-1 was turned over indefinitely to Federal jurisdiction, the first discovery was made. In one ear, the pilots and crew of CreoDron were hearing stories of a new, unknown civilization and in the other, the mechanical drawl of a Federation police drone reading them their rights.

Normally, such a task was paid its respect, and even the most severe of the Eagle's captains would dutifully inform a fellow citizen of their legal rights. As both parties floated there, however – the once-honored formalities of the moment handled by automatons – the Eagles received their own distracting news. Another nineteen wormholes had been discovered, and although that amount by itself was easily matched, what disconcerted the captains most was that only five minutes before their arrival, the number had stood at one.

The Helios rested up against the structure. The enclave in the distance seemed quiet, bereft of life. This one, however, felt young even now. There was such beauty in this timeless design, even though time had claimed them all.

It was more real this time. He looked more real, but she could see it. See that he was not, and that perhaps, this was not either. The data could have been pulled from the fluid router cache, enhanced somehow. Any automated system that could do something like this would be far more advanced than she had known, but then this was not her field, and she had a saying about scientists who casually dipped into her own. All the same, she could swear she knew the design. So old. She had these thoughts even as she stared at him. Too much a scientist and too little a soldier.

This time, there was no life in Hilen's eyes, and it was telling her to go.

Once again into the darkness, and for a moment she could almost feel that wind on her face, as the data that represented who she was failed to cross the river back home.

"An advance scout, deployed… deployed in Lonetrek. They reported the wormhole in Ibura, scouted the other side and landed in the middle of our operations base."

Lianda watched the leaves falling into the stream, plucked from the limbs of the trees with such ease. The wind was so gentle she could barely feel it on her face and yet it took them all, softly caressing the branches into donating the remnants of life they once bore.

She could understand that eagerness, how easy it was to let go after you'd grown out of the things that once nurtured you, that once comprised your entire world.

He understood this, of course. This was his VR channel, and he had chosen the environment for a reason.

"Hilen," she said quietly, looking across to the Deteis. His eyes were fixed on the currents that licked at the edge of the bank. A sobering gaze slowly lifted to meet hers. The weight of everything they had shared was staring her in the face. She fell silent.

"Go," he said, turning away from her and shaking his head. "Just…"

He disconnected the feed, leaving her alone in the surrounding black.

"Her unique network ID was accessed at the same time she attempted to make contact, yet she did not enter her password correctly."

"Yes, we looked into it. She didn't gain any access to secure information. We're investigating the reasons she didn't authenticate properly."

"Of course, but that's not what I wanted to mention."

"You don't seem to know what I'm talking about."

"The password, the one she entered. The incorrect string?"

"I will put aside any questions I have about how you would have access to such a thing and ask you to come to the point."

"We were not aware."

"With due respect, Sir, what you are not aware of is that for every one of those six Helioses inside your system, there are two of our Buzzards."

"I believe that as much as I believe you're a psychologist."