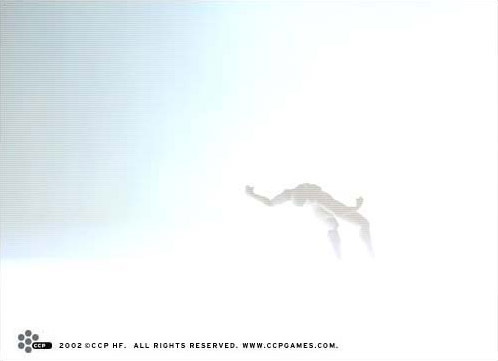 And then it was all over. The capsule cracked open. The naked skin, exposed to direct sunlight, flared up. The body swelled, convulsing uncontrollably. Just as consciousness faded the saliva boiled on the tongue. Death came quickly thereafter. The body mingled with the debris of the former frigate. In the background police ships chased down the killer.

It all began so innocently. Two Gallentean frigates cruising along in Federation space. Chatting amiably. One a wide-eyed rookie; the other one acting the veteran part. Disaster: a war of words, followed by threats and insults. Then chat stopped and weapons talked. The rookie never stood a chance. But wait! Police ships approach. Too late to save the rookie. So they punish the offender. Justice is swift - an eye for an eye, a tooth for a tooth. The veteran’s body joins the rookie in its graceful dance around the sun.

Yet both live. This very moment they wake to life in their brand new bodies. Maybe they will get a chance to dance again some other time - maybe then the rookie will have learned some new tricks.

This is not the end. The cycle of life saved the fallen two from oblivion. So too their cadavers are returned to the eternal circle one more time. Their frozen dance interrupted as soon as the horizon swallows the police ships. A non-descript ship sidles up. A couple of salvage drones fleetingly deployed. The lifeless bodies snatched up and hurriedly returned to the ship. Getting caught body mining by the Gallente police means serious, serious trouble. Then the ship warps away, wanting out of Federation space quickly with its very hot cargo. Searching for a cloning facility that doesn’t mind a bit of ill-gotten A-grade biomass on the side. Life goes on, citizen. Nothing more for you here.