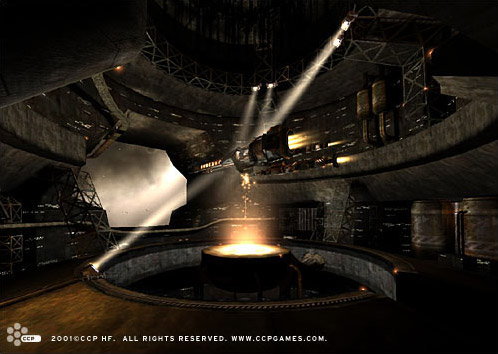 What a stroke of luck! Burki ‘Tiny’ Trom relaxed as his cruiser made the last maneuvers through the docking bay doors of the Minmatar station. He had been looking for a training kit for Entwined Shield Systems for a week now and had finally found it here in this half-ass market zone deep within the Republic. If it weren’t for his acquaintance in the Republic’s ministry of trade he would have never thought of looking in this obscure service station in the Nifflung system. But once again this only proved that if you wanted to get your hands on those rare and precious items you had to be prepared to look in unorthodox places.

Tiny had already made the necessary preparations, last week he finished training Advanced Ocular ECM, the pre-requisite for ESS, and he had stocked up on stims specially designed to boost his memory faculties for faster training. Pity to have to come all this way just for an item stored in computer form. He had asked them to upload it to him as was the norm, but no, these primitive peasants demanded he came in person to collect it. Oh well, at least he was here now. Besides, Tiny knew of a rich mineral seam in a nearby asteroid field. Wasn’t it ideal to spend the idle time while expanding his knowledge to search for the mother load of all mother loads?

Tiny didn’t spend any more time on the station than absolutely necessary, so few minutes later he was back in space. And what do you know? It seemed three space cowboys were laying in wait for him, a cruiser and a couple of menacing frigates. Great. Tiny’s communication device sputtered into action: ‘OK, fella. We’ve got you covered. Now be a smart boy and jettison whatever you have in your cargo hold and no harm will come to your precious cruiser.’ Tiny ran some profile scans on the three ships closing in on him. As he thought, pirate scum! Well, this wasn’t their lucky day. Tiny sent a reply: ‘Sorry, guys. No can do. I suggest you turn and leave before I become inclined to inflict some serious unpleasantries on your sorry asses.’ Tiny imagined the sneers his reply was getting from the gung-ho gangsters and smiled when his radar registered what he knew all along was out there. Three small dots blinked into existence, cordoned around the cowboys. All cruisers. With cloaking devices. It didn’t take long until the only sign left of the pirates’ presence was the residue from their warp drives as they fled. Before they’d warped Tiny sent them one final farewell message: ‘Heavily armed amigos, never to leave home without them!’ Then he laughed and paged his comrades: ‘Lets go!’