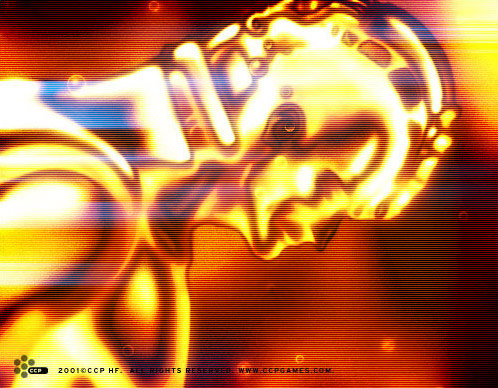 In the time since all the races came into contact with each other about 150 years ago interstellar trading has steadily increased, especially in the time since the races began cooperating more closely through institutes such as CONCORD.

Today a certain number of ships are equipped with a capsule, which makes control of the ship much more easy and efficient for the pilot (known as a ‘capsuleer’). Not just anybody can become a capsuleer. Captains need special kind of neural riggings and the training is extremely rigorous and taxing, with only a small fraction of students actually making it through. This makes able capsuleers a unique breed that possesses special status within society. Capsuleers are regarded by the empires as objects of huge prestige, since the number of interstellar traders an empire has in many ways reflects the economic vitality of the empire.

Despite the desire of the empires to keep their capsuleers on a leash, however, things have developed differently. Because of the capsuleers’ exalted status, they’ve managed as the years have passed to make themselves ever more independent from the empires that spawned them. While many capsuleers are still employees of an empire company or organization, the work they do is largely self-controlled. The ever-increasing number of capsuleers entering the market alleviates this problem for the empires and has allowed them to increase the number of capsuleers working for them despite the fact that proportionally more and more of these individuals are going totally independent. The independent ones, however, are setting up their own alliances and nation-states out on the fringe, slowly increasing their power and influence.

The prestige enjoyed by the capsuleer is enormous. Apart from the celebrity status many of them enjoy they receive a number of other privileges. The most important of these is their access to cloning, which is strictly supervised in all the empires. Although some rogue cloning stations are in operation the vast majority of cloning facilities are owned and run by the empires and the requirements for clone ownership are strict and rigorous. Capsuleers are one of very few professions that, due to the nature of their job, possess more or less unrestricted access to clones, although any special clone types must be paid for out of their own pockets.