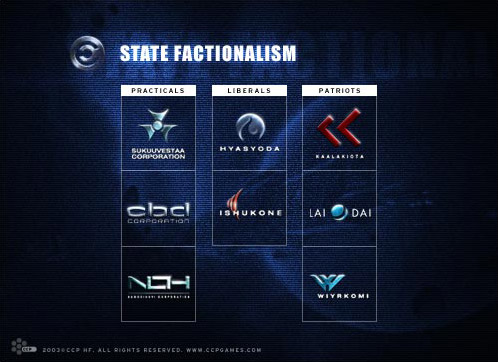 To the outsider and the uninformed, the Caldari State seems a solid, unified entity. This has been true for brief periods of their history. The latest of those is now coming to an end. The eight Caldari mega corporations, like all great cynics, know the price of everything but the value of nothing and this is now tearing them apart.

Three blocks have formed around different ideologies, mainly in regard to foreign policies. While the forming of these blocks does not threaten the fabric of Caldari society it may very well move the Caldari State in a radical new direction in regards to their relations with the other empires.

Historians have pointed out parallels between the current situations and those found shortly after the Gallente-Caldari War started. Then, the mega corporations split into two groups, one that wanted to pursue peace negotiations with the Gallenteans and another that wanted all out war. The matter was solved during the Morning of Reasoning, when during a morning meeting of the Chief Executive Panel the warmonger corporations forced the CEOs of the other corporations to perform the Tea Maker Ceremony. The CEOs had to drink poisoned tea; if the Maker looked favorably upon them they would be saved, otherwise their crimes would be confirmed by their deaths. They all died and the warmonger corporations (the current mega corporations) split the assets of the fallen corporations between them and escalated to total war. Although the Caldari State is not currently at war, the political situation is similar in a number of ways and many fear that drastic events may be on the horizon, with the corporations busily drawing the battle lines.

The three factions that are becoming evermore apparent are each led by one of the large mega corporations with other mega corporations, as well as lesser corporations, closing the ranks behind them. At this early stage it is impossible to tell which faction has the most strength as they seem equally poised.

Heading the self-proclaimed “practicals” faction is the huge Sukuuvestaa Corporation. The SuVee, as it is commonly known, is one of the oldest Caldari corporations, matched only by the Kaalakiota Corporation in size. The exploiters, which also include the CBD Corporation and NOH (Nugoeihuvi) Corporation, have practiced unethical business tactics for a long time, as well as being frequently associated with organized crime elements. The practicals see the other empires merely as naïve markets ready to be exploited by unrestricted and ruthless trade where everything goes. The recent Protein Delicacy episode serves as a good example of what kind of business these companies want. They care little about who is a friend with whom and even less about what long-term political ramifications their unscrupulous business practices can have. They are mercantilist in their views on trade, believing that profit for one always means loss for another.

The second faction is the liberals, whose views are completely the opposite of the practicals in regards to interstellar trade. The liberals believe in fostering improved relations with all the other empires, creating a world where there are no trade barriers and free-flow of goods. They believe in trade deals that mutually benefit the participants and the empires can come together in a peaceful, prosperous future world only through cooperation. The liberals are led by the Ishukone Corporation and also include the Hyasyoda mega corporation. Their strong position within CONCORD is accentuated by their belief that it is their main vehicle in promoting universal peace and stability so that trade can flow freely and cultures mingle peacefully.

The third faction is not all that concerned about trade, but more about the place the Caldari State enjoys versus the other empires in both military and economical sense. These are the patriots and they are led by the Kaalakiota Corporation, but also include Lai Dai and Wiyrkomi. The patriots cultivate the Caldari heritage, reminisce about the great Raata Empire of old and weep for their lost home world, Caldari Prime. The most fanatical of them cry for a renewal of the war with the Federation, but they are a minority. The majority sees economical dominance in the world only as a tool to promote military power. The patriots are willing to negotiate alternative ways to acquire Caldari Prime other than through war, but they know that they can only see their dream come true by convincing the Federation of the economical and, most importantly, militaristic superiority of the Caldari State. This is what they strive for.