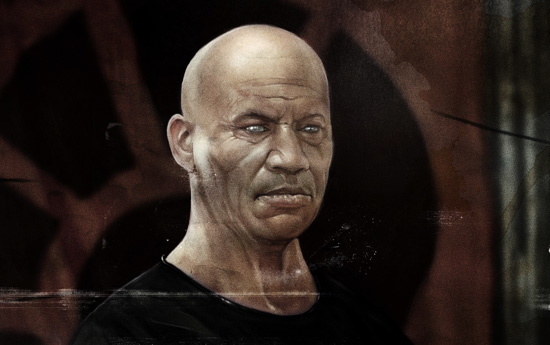 This configuration was new to him. A beautiful one, though it lacked the smooth subtlety of the Kaulas patterns, the ones from before the revolution. The Thukker as a whole had tended toward violent motifs after the great save, its people too drunk on their own rage to remember they were free, and every creation from its cultural womb since then had in some way borne fury’s jagged stamp.

He set the object on the table. Before him was a wall, three quarters window, a tinted expanse of transnano stretching several meters to both sides and displaying the beginnings of a sunset upon the quarter beyond. Underneath the window was the small table, its contents cast in deep sun yellow, and at it he sat, his mood darkening with each passing minute.

He stood up, made his way to the desk in the opposite corner of the room and sat down at it. On the desk, a modcom was chirping.

"Emissary Shakor, this is Central," sounded the machine. "Your afternoon appointment just arrived at the compound. Are you ready to receive him?"

"Is this Sergeant Ermika speaking?"

"I said your name isn’t Central."

There was a brief pause, then a small nasal exhalation on the other end. "Thank you, sir. Forgot."

"No harm done, Sergeant. Let him in."

Shakor leaned back. Resting his elbows on the chair’s metal arms, he locked his fingers together across his stomach, tilted his head back against the top of the headrest and let out a long breath. He rubbed his eyebrows smooth with two hard strokes. Then he stood up, straightened the front of his shirt with his hands and walked back over to the window. He was standing there, pensive, when the door buzzer sounded.

Sound of someone entering, then a voice. "Admiral Morata is here to see you, sir."

"Very well." Shakor turned half in the direction of the door and waited. There was a shuffling of footsteps, followed by brief silence.

"Hello, Hakram," replied Shakor warmly. "No need for formalities, least of all when they no longer apply." He cocked his head now in the other man’s direction, as if sniffing something out with his mind’s eye. "At ease, soldier," he said presently.

Hakram Morata, Vice Admiral of the Republic Fleet, veteran of hundreds of battles, stiffened a bit, then relaxed. He shook his head, slowly. "How do you always know?"

The two men made their way over to the small table and sat down at each end of it. A cool draft played through the sparse chamber as the door slid closed.

"I heard something," said Shakor.

"Yes," said Hakram. "A little under three hours from now."

"I see." Shakor cleared his throat. "How that boy has grown."

He stood up and went to a carved wooden cabinet set into the wall, from which he gingerly retrieved a glass bottle filled with an opaque liquid of darkest brown. He unstoppered it. "Care for a drop?" he asked, somewhat perfunctorily, as he began to pour the liquid into two small glasses.

Hakram smiled. "You know me."

"That I do," said Shakor, handing him one of the glasses. A rich aroma filled their corner of the large chamber. "To ours."

They drank. Shakor sat down again.

There was a studied silence, and then Hakram spoke. "Well, sir, I want to ask you to consider some of the things Keitan is going to talk about tonight."

"Well, he is going to cover a fair few subjects. For one, he’s going to urge you to come back." Shakor sat very still and did not react.

Hakram’s eyes fixed on the spiked orb sitting upon the table. He picked it up. "You’re really in a unique position to do the things that need doing, sir," he said, quietly.

"I’m not in a position to do anything," replied Shakor. "I’m tired of the things that need doing. I’ve been a member of this carnival for too long. I’m tired of collateral damage and lives on my conscience. Tired of getting tangled in the political underbrush."

"Tangled?" Hakram put the orb down. "But you dealt with the Elders, sir. You worked with the Thukkers. You circumvented every protocol there is."

"Yes, at the cost of a good woman’s political career and the stability of our government. Those aren’t dues paid lightly."

"But you did what needed to be done," Hakram said. "You shook things up enough for them to be set right again. Why finish with the job half done? There is a groundswell of support for you, at the public level as well as within the entire structure of government."

Shakor laughed. It was a deep and abrasive sound, the pounding of a punctured war drum. "Hakram. My boy. Do you think public support means anything, with things the way they are?"

A tiny blink escaped one of Hakram’s eyes, a momentary crack in his mask of equilibrium. He sat upright in his seat, glad, as so often before, that the old man was blind.

"Not the public’s, necessarily, but the ministers have…" he began.

"The ministers? That great thunderous gaggle of short-sighted polemicists? Oh, yes, I’m sure they love me. They’ll love me until I do something that doesn’t quite serve their interests, and then they’ll hem and haw and harrumph and draft legislation and set their lackeys to screaming, and before you know it we’re back to the low squabbling that keeps us stuck in the mud."

Abruptly he stopped there, and smoothed his eyebrows with a sharp upward motion of both hands. He stood up. Hakram waited, watching him intently.

"I’m not the person for it," said Shakor. He walked back over to the cabinet, found the bottle and returned.

"Sir…" said Hakram. Shakor quieted him with a gesture, then held out an open hand. He gave his glass to the old man.

"I appreciate your making the trip all the way out here," Shakor said, in a more convivial tone. He poured them two more drinks. "Did you have any problems getting in?"

"I was questioned a fair bit," said Hakram. "Nothing too bad."

"They know what they’re doing."

"If I’m not mistaken, there should be some domes perched on the horizon there." Shakor pointed in the direction of the window. "They’re synthesizing plants from the homeworld over there."

"Really?" said Hakram. He looked over Shakor’s shoulder. Past the sprawl of squat metal buildings beyond the window he saw three gigantic skulls jutting out of the landscape, retiring rays of sun laying checkered patterns over their silvery pates.

"Genesis vaults, they call them. They’re aiming to eventually have specimens of every known plant from Old Mother." Shakor took a sip of his drink.

"Impressive," said Hakram. "Very impressive. Wouldn’t have expected it from the Thukkers, to be perfectly honest."

Shakor set his drink on the table. "I wouldn’t have expected it from anyone," he said.

A period of silence passed between the two men, leaden with quiet consequence. Shakor was sitting with his elbows on his knees, flat palms pressed together, leaning forward. Hakram was sitting back, his hat in his lap and his left ankle resting on his right knee.

He switched legs, dusted a bit of lint off his calf and said "Maleatu… how can I get you to reconsider?"

And so the afternoon went.

"I have a message for you," said Hakram. He was standing by the window, looking out at the flat tops of the surrounding buildings, the tiny motes of windowlight like insect eyes in featureless faces.

Shakor raised his eyebrows and lifted his head slightly in the younger man’s direction. "Oh?" he said.

Hakram came back to his chair and seated himself. "You spoke of collateral damage earlier. About making sacrifices and never knowing whether they had any meaning."

"Do you remember a decision of that sort that you made, twenty-six years ago, when you were fighting in Ammatar space?"

"When the rest of the militia heads asked you to leave the front because your presence was bringing down too much heat on their heads?"

"When, despite their insistent cajoling and threatening, you stayed an extra two days in order to be able to gather crucial intel that would, it turned out, end up saving the lives of millions?"

"Yes, yes," said Shakor. "Very theatrical. You have my admiration. Get to the point."

"My message is from one of those commanders. Do you remember Silbraur Makusta?"

"Of course. He’s a high-ranking member of the Justice Department."

"Yes, but back then he led a group called the South Rixarn Army. It was one of the smaller militia groups active on the Derelik fringe back then."

Shakor’s eyebrows lowered and his jaw clenched. "I remember the SRA," he said.

"Just give me the message."

"Yes, sir. Senior Counsel Makusta heard through a common acquaintance in Fleet brass that I was going to go to the Sanctuaries to try and convince you to come back. When he did, he had this message delivered to me and said that it was to be given to you verbatim."

"I assume you’ve memorized it."

"He wants you to know that every single one of them would have willingly chosen their fate, had they known the stakes."

There was a long pause.

As the mantle of dusk continued its gentle slide over the moon’s dry skin and its inhabitants began to lay themselves to rest, his modcom sounded again.

"Emissary, Ambassador Keitan Yun has requested to speak with you."

He spun the orb in his hand for a few moments. How jagged it was.