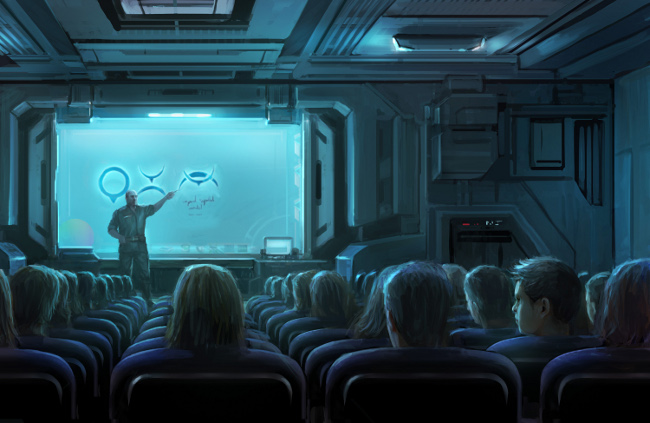 "God; Emperor; Theology Council." Nusi tapped the triangle he'd drawn on the board. "That's the theological underpinnings, at least, and - luckily for you - this isn't a politics class, so that's all we cover." He glanced up at the timepiece on the wall. "Well, that’s it for today's material, and we still have time to spare. It wouldn't do to let you go early, so...any questions?"

No, he reflected in the silence, it wouldn't do to be too forward, would it? That would be gauche, under the circumstances. This group was a fast-track class; unprompted enthusiasm would be unseemly. He moved forward a little.

"Annoli, you were looking thoughtful a few minutes ago. What was troubling you?"

"Well..." she started slowly, "is it true that the Khanid aren't allowed in the Council chambers?"

"Ah, I should've known it would involve his Highness. He's too old for you, you know..." A few quiet chuckles rumbled around the room, and then a hand shot up. "Yes, Garund?"

"I've heard it's never stopped him in the past, sir." More laughter.

"Ok, ok, let's not be having fun at his Highness' expense." Nusi shot a quick glance into the corner of the room. "Does anyone know the answer to Annoli's question?"

"My pa tole me that it was the symbol that they dint like. He said there was something about it that upset them."

"Good, very good. Yes, the Khanid people, be they Imperial citizens or Royal subjects, are allowed entrance, but the Royal Seal is...well, it's not banned, per se, but it's not welcome there either. Now, does anyone know why?"

"Well, since we have time, I'll explain properly. We're going to go on a journey through some symbols, because you can't really appreciate the significance of the situation until you understand the background. First–"

Nusi moved back to the board, wiped it clean, and drew a circle with a small inverted triangle at the base.

"The first men, yes. Unbroken circle, God become man - looks a bit like an upside-down egg, I always thought. That's probably symbolic of something, too... Anyway. First men. This leads to–"

A second symbol, one half-circle above the other, open sides away from each other, with the same inverted triangle at the base of the upper one.

"Something to do with the dark?"

"Exactly. This is after the Fall and so on, during the Long Dark. Man and God entirely separate, with man below on his planets and God above in the heavens. An age of savagery and barbarism and general unenlightenment - an age which still persists to this day outside the confines of the Empire. And, yes Annoli, outside the Kingdom as well. His Highness remains an enlightened man in that respect. Which brings us to–"

A more familiar symbol, the two semicircles laid one on top of the other, with the upward-arcing one broken where the other crossed it.

"This one you know; it's the Imperial Seal. When we came out of the Dark and formalized the Imperial Creed, man and God were reunited together again, albeit imperfectly. United but not conjoined, primacy of the Divine and the rest. This is Citizenship 101 stuff, which I'm told you've all passed now, yes? Good. Aleine, you have a question?"

"Yeah, uh..what does this have to do with the Khanid?"

"I'm getting to that! One final detail you need to know about the Imperial Seal. You remember from earlier that the Theology Council asserts that the rule of God comes before the rule of man? Well, the symbology at work here is the underpinning of that concept. Just as the Emperor above rules over the people below, so God above rules over man below. Primacy of the Divine isn't sufficient: the implied heirarchy is critical to the rationale.

"So then. When Khanid II upped and left, Heideran–" a glance again into the corner of the room. "That is to say, of course, Emperor Heideran VII, immediately declared him in breach of precedent, along with various other things. The Theology Council, though, followed due process and sent a firmly worded message to Khanid inviting him to explain his actions. There was a bit of a delay, and then his Highess (as he is now) replied with this–"

"The delivery was, in fact, a very nice rendering of the Imperial Seal, done carefully in his House colors, but inverted."

Nusi looked around. A lot of blank faces, but a few sparks of dawning comprehension.

"Rial, what property of this little sign is making your eyes bulge in such a curious manner?"

"If...well, if...if the Council gets its authority...the thing on top... If the Imperial Seal is saying that God's law is better than man's law, then..." The student glanced back over his shoulder.

"Then the Royal Seal is saying that man's law is, shall we say, more important than God's law. It's a historical discussion; nobody's saying that it's true. But yes, that's what Khanid was trying to say – or at least, that's how the Council interpreted it. With a single, simple image, he denied the theological root of the Council's authority, telling them that he could damn well do as he saw fit, so long as he broke no secular law – which he hadn't, because Heirs are above such things. How, do you suppose, did the Council react to this...Indlar?"

"Hah! You're damn right they weren't happy! They passed down judgement pretty promptly after that, and even though those Justices have all since passed on, the Council as an institution still hasn't forgiven Khanid. That's why it's extremely unwise to take the Royal Seal into the Council chambers. They see it as a direct challenge to their authority, even now. Teilf, you have a question?"

"No, because Khanid's reply was the first time anybody had seen it! It seems that he made it up just for this purpose, but decided to keep it afterward as his Royal Seal. Only his Highness knows exactly why, but once he made the decision, he stuck with it. There's other readings of it, too, and again, nobody but Khanid knows which ones are intended and which aren't. For example, given this – the inverted Imperial Seal or the Royal Seal or however you want to think of it – you can arrive at this–"

The second symbol, with the two separated semicircles, but inverted.

A glance again into the corner of the room. "This symbol is frowned upon, but I'm allowed to explain it in this context so you know the truth. I'm not going to ask you to speculate on its meaning; there are many ways to interpret this, some of which you may come across over the years, but there's only one correct interpretation, which is that the Imperial Creed is part of our heritage and our culture and our very identity, but that our future is among the stars. I stress again that Khanid II has never indicated that his Seal implies anything more than rejection of the Council's authority, and that other readings of the symbology here are simply incorrect. And that, I hope, answers the original question in a reasonably comprehensive manner."

A hand crept up lazily in the back corner of the room.

"Zweir, you have something to ask?"

"You've shown us five symbols. What about the sixth?"

Nusi stared long and hard at the boy, and then answered with a smile that contained no hint of mirth.

"There is no sixth symbol, and that's all we have time for today. Class dismissed."