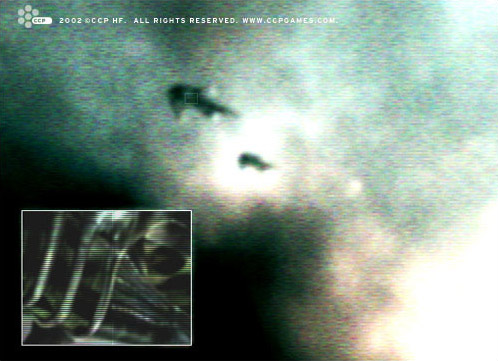 The wreckage was still smoking; isolated fires still nurtured contently in hidden corners, flowing unnaturally in the zero gravity. Case Omnicron scrutinized the debris, focusing briefly on a promising crate or box before moving on. The assailants of the large cargo vessel hadn’t left a lot behind. Normally, Case wouldn’t stoop so low as to scavenge destroyed ships for scraps, but he made an exception this time as the cargo vessel was essentially a fresh carcass. Case had witnessed from afar the fierce battle between the cargo ship and the two frigates attacking it. The cargo ship put up a surprising amount of resistance, maiming one of the heavily armed frigates before going down itself, hinting at lucrative cargo on-board. Case had waited for the remaining frigate to finish rummaging through the wreckage, as the capsules of the destroyed vessels made their way to the nearest station. The reunion of the downed pirate with the crew of the cargo vessel on the station would undoubtedly be quite colorful.

Fifteen minutes later Case set his course away from the wreckage, his azure-colored ship streaking away from the smatter of asteroids that encircled the battle scene; he didn’t want to spend too much time snooping around in case the pirates or the cargo vessel crew returned to the scene. Besides, he had just snatched a cargo container full of valuable trade goods and had no intention of getting caught with it. Case considered himself a lucky man. Ever since he first set out as the sole captain of a small space frigate some six months earlier, it seemed like fortune had smiled upon him. It was like he had an uncanny sense of being at the right place at the right time, without ever being able to explain this ‘gift’. Yet he always had a nagging feeling that he was somehow wasting his time; that he was meant to be doing something far greater and nobler, but was never able to grasp what this elusive thing was. As Case aligned his ship towards the nearest stargate, this feeling of loss; of being the missing link in some grand inter-stellar puzzle devised by an unseen but all-knowing being haunted his thoughts once again. As he was about to activate the warp drive, his mind went blank; his unconscious body slumped inside the ship’s capsule.

The two tiny ships approached Case's blue vessel at a leisurely pace. Their hulls, if they’d been visible, were a multi-colored swirl, like an oil spill. The ships glided silently to either side of the larger frigate, complex arrays of sensors prying apart every detail about the man and the machine they were focusing on. A quiet conversation between the two captains ensued. ‘Is this the man we want?’ said one. ‘This is him,’ the other replied. ‘I will start my work.’

The one stood guard, while the other worked in silence. His mind subtly instructed the sensors, sending data directly into the mind of the comatose captain within the blue ship. It only took a few minutes. ‘Is it done?’ one said. ‘It is,’ the other said. ‘I will awake him now.’

The two captains watched as the slightly bewildered Case Omnicron, oblivious to those watching him, finally made his way to the stargate. ‘Has the behavioral pattern been aligned correctly?’ asked one. ‘Yes, he will do much better now,’ the other answered with pride. Then, the hunter and the repair man, activated their own warp drives and started their journey home.