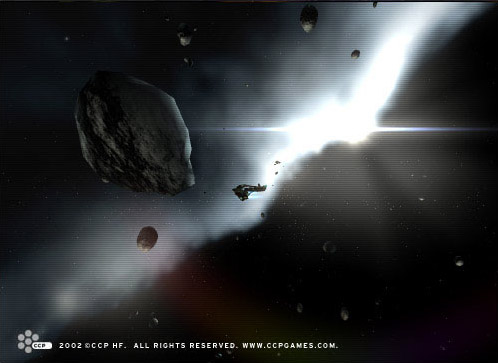 Captain Ieris Hvik steered her small frigate into another loop, patiently waiting for the miner to disembark from Ethernity II station, a small blip on the edge of her radar. This particular miner promised some good yield, judging by his track record. He had great standings with the corporations around here – all the better for refining – and he was a fast and efficient miner.

At last the bronze colored Navitas-class frigate slid out of the station. The miner adjusted the course of his set, aligning it towards the asteroid belt between Ethernity II and Ethernity III. Few seconds later his warp drive kicked in and in a heartbeat he had disappeared in a bluish flash. Hvik counted to 30 before activating her own warp drive - no need to get the miner paranoid by getting too close on his tail.

Once in the asteroid belt Hvik quickly assessed the situation. She picked up the signal emanating from the tracking bug on the miner a few hundred kilometers off and adjusted her course accordingly. Once within scanning range she matched her speed to that of the miner. The miner was already scanning asteroids, but hadn’t yet deployed his mining drones. This, and the fact that he was still heading full speed deeper into the asteroid belt, indicated that he was looking for some specific minerals, undoubtedly some rare ones. Hvik chuckled to herself, pleased with her selection. Now, all she had to do was wait and let the miner do her work for her.

Hvik had started out as a miner, but quickly found that she didn’t have the patience for it. But before she quit she’d established some pretty good contacts in the mining industry and was able to off-load minerals at good prices. So it was natural that instead of becoming a mercenary for hire or a pirate chasing freighters, she would focus on miners - preying on them in isolated areas and loot their minerals. It didn’t take all that much combat skill as long as one refrained from attacking groups of miners. And there were always a lot of lone miners in the outer regions, dreaming of striking gold with no one to share with. Hvik was happy to oblige, the miners didn’t have to share with her - she’d take it all.

Hvik’s console beeped, dragging her from her reverie. The miner was deploying his drones. Hvik stretched in her cocoon, setting the ship on stand-by, preparing it to haul in the load of the day.