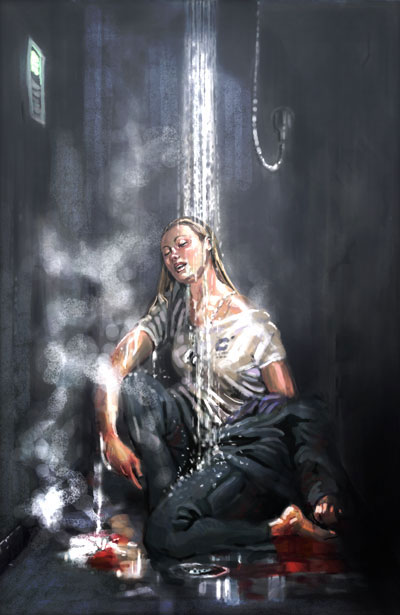 The shower sprayed warm water on her crouching form. Rivulets of water ran down her face and into her clothes, soaking them. She rocked back and forth, cooling her back on the metal wall, then warming it up again from the shower's downpour.

Various sensations ran through her body, the foremost of which was tiredness. She didn't know whether to attribute that to adrenaline backwash after the night's events, or if it was merely the usual mental exhaustion from working in the mining colonies. She felt like she could crouch there forever, washing everything away.

Eventually the clinginess of her clothes began to annoy her, so she rose and stripped them off, dropping them where she stood. She glanced down and noticed the tendrils of blood, which were weaving their way from the clothing pile and into the drain. She sighed, and combed her fingers through her hair.

A noise sounded, somewhere far, far off. She ignored it, closing her eyes and turning her face towards the jet of water.

The noise continued; a buzzing, grinding sound, like flies in a jar. Atira rubbed her temples. The noise was supplanted by knocking, first soft, then hammering.

"All right, stop, all right, all right, I give up!" she said and turned off the shower. Squeezing the drops out of her hair, she stalked out of the bathroom and into the corridor without even bothering to pick up a towel. She glared through the peephole in her front door, then opened it.

Caleb looked down at her body, then up again into her eyes. His face showed no expression, neither surprise nor interest. Police partnerships excluded every other kind.

"Figured I'd make sure you weren't doing anything stupid."

"Keeping the evidence around. Concocting a story that's going to sound implausible. You tell me." He paused. "You're dripping on the floor."

She looked down, grunted, then walked back into the bathroom. She heard Caleb come in, closing the door behind him. He followed her, walking into the bathroom, and for just a fraction of a second she felt a pang of nervousness over the whole situation. But he didn't spare her a second glance, stalking instead to the shower and turning off the water, then looking down and staring at the pile of clothes.

"You better," he said. "And not while you're in them, or all you're doing is spreading his blood over you."

"Look, for crying out loud, relax."

She walked in front of him and stood there, hands on hips. "Hey!" she said. "Do you trust me or not?"

"It's not a question of trust, and you don't even need an answer to that. It's a question of professionalism. We did what we did, and we have to clean up after ourselves, or there'll be trouble."

"I know all this. I just needed to clear my head. I'm not a machine like you are," she said, in a tone that was half frustration, half grudging admiration.

He nodded. "Did you at least take care of the body?"

"Yeah, incinerator. I'm glad I started weightlifting again. The dead are so heavy."

"You know I would have come with you, but I had to make sure we were covered. Alibis don't just make themselves up," he said.

She smiled, put a hand on his shoulder. "I know. I appreciate it, Caleb."

"Anytime. Now will you please wrap yourself in a damn towel or something?"

She laughed at that, raising her hands. "Okay, okay. Right away, sir."

She went into the bedroom to hunt for fresh clothes, and heard his voice shouting after her, "What about the dog tags?"

"In the kitchen!" she shouted back, and heard him walk there. She pulled on some indoors clothes and went to the kitchen, where she found Caleb standing stock still, staring at a small metal bowl. It contained a pair of dog tags, their metal varnish partly eaten away.

"He was a pirate?" Caleb asked.

"Yeah. Spotted the tags right before hauling him into incineration. Good thing, too. They can withstand explosions, so I didn't dare leave them. I'll get some acid from the chemlab tomorrow."

"What is it with these guys?" Caleb said, half to himself. "Even when they're trying to lay low, they get into trouble. Didn't we take down two like him, last month?"

"Serves them right. I don't know why they crop up here, but nobody threatens an officer. Don't know where it would end if we let that happen."

"If it weren't for us, this place wouldn't even exist. It would've torn itself apart. You know as well as I do that the type of person who goes to work in these colonies isn't the type of person likely to have a stable family life or personality. These people have higher thresholds for everything, including pain and cruelty. Normal human beings you can reason with, sometimes, but these guys won't understand unless you hit them hard. And sometimes you have to go further. This guy followed us around, he threatened you, and he provoked a fight. We cannot stand for that sort of thing here, and this guy, he was a nobody. He won't be missed." He took hold of her shoulders and stared directly into her eyes. "Don't ever doubt yourself, okay? They can feel that. It doesn't matter what you do, or how far you go; what matters is that you react and you don't ever flinch. You are never wrong. Remember that. You are never wrong. "

She returned his stare, and nodded. "Thanks. I needed that."

"All right. You going to be okay over here?"

"Sure. Just need to dissolve this and it'll all be gone."

"Okay. Good." Caleb rubbed the back of his neck and sighed. "Listen, take care of yourself. I'm gonna head back, make sure we were somewhere else. See you later."

After he was gone, Atira rested against the kitchen counter for a while, breathing deep and slow. She still felt in a dark mood, but the worst of it had ebbed away. Caleb's presence was enough; his clarity of purpose focused her own.

The doorbell buzzed again. Atira laughed, walked over to the front door and opened it, getting ready to tell Caleb she wouldn't strip for him a second time. By the time she'd pulled the handle and begun to swing the door open, she realized that she really didn't know who was on the other side, and almost slammed the door in the face of a rather intimidated-looking man.

"Atira Malkaanen? Sorry, am I interrupting?" he asked.

"Yes to the first, no to the second," she said, looking him up and down. He was a middle-aged man, with neither the build nor the dress of a mine worker, and looked quite harmless. Still, she reflected, so had others.

"I'm a resource inspector," the man said. "My name is Johan Serris. As you may know, there've been some concerns about possible water leakage in the area. We've had an absolute bugger of a time trying to find the source, though, and we're reduced to looking at any suspect blip in our readings, no matter how insignificant. Uh, have you noticed anything leaking in your apartment?"

Johan sighed, and looked downcast. "Ah. Yes, I believe it would."

He fiddled a bit with the hem of his coat, then noticed himself and swiftly placed his hands in his pockets.

"Did you want something else?" Atira said.

"Well ... I know this is a bit of a bother, but might I take a look around, just for appearances' sake? If I can't tell my boss I gave this an inspection, even a cursory one, he'll have my head."

Atira hesitated, but decided that she might as well let the man take a look rather than arouse any kind of suspicion, however small. "Sure, help yourself" she said and, before he could respond, immediately walked out of sight and into the kitchen, where she soundlessly took the murdered man's dog tags and put them in her pocket.

Johan followed, silently looking around. "You keep this place pretty neat," he said.

"Well, you know us women," she said with forced cheer.

Johan nodded and smiled, showing that he didn't. He followed her into the kitchen and looked around, his gaze passing over the empty metal bowl without pause. He turned and stepped into the living room, found nothing of interest in there, took a quick peek into the bedroom and withdrew without comment.

"Well, I think we're good here," he said and clapped his hands, smiling the wide smile of someone who doesn't want to be where he is.

Atira nodded, smiled back and walked towards the corridor, expecting Johan to follow her. He did, but as they passed the bathroom he said, "Oh, mustn't forget!" and before she could stop him he'd ducked inside and taken a look. She rushed after him, thinking up distractions, but by the way he froze up she saw that it was too late.

"What on earth is this?" he asked.

She was filled with an urge to take this little man and put his head through the wall, but fought it down, and quickly tried to think of an excuse.

"I don't believe this," he said. Have you been washing clothes in there?"

She had the sense to look at the ground, feigning deference and biting her lip to hide the smile that wanted to break out. "... Yes," she managed at last. "Yes, I have. Exactly. Gods, how embarrassing."

"Ms. Malkaanen, while I doubt that this habit of yours has anything to do with the water leaks, it sure isn't helping. We have industrial washeries here that'd take care of your laundry in no time. Why don't you use them? Why would you possibly want to waste water and do this in your own home?"

While he was talking Johan had been staring at her. He now glanced back at the pile of clothes, just in time to notice a tiny thread of blood weave its way from it and down the drain.

His eyes widened, and he turned to Atira to say something, but this time she was ready.

She dropped her voice a bit and said, "There was an accident. I'm early."

Johan's mouth shut with a click. He blinked a couple of times, and his Adam's apple bobbed up and down. Then he said, "Right. Okay. Great. I think we're done here. Err, if it happens again, I ... well, nevermind. You do what you need to do."

She smiled demurely. "Thank you. I will."

The inspector made his exit and Atira closed the door behind him. She peered through the door's keyhole, and once she saw that he had left, she leaned against the door and breathed deeply. That, she thought, had been a little too close, though thankfully she now had someone who'd likely vouch for her innocence if it came to that.

She combed her fingers through her hair again, pulling at it to break the knots. Someday she'd get a comb. Perhaps she'd even get some moisturizer for her face, which was dried up by the water. Be ladylike. Keep things properly ordered, and not just drop them anywhere. Like Caleb, who right now was busy ensuring both their alibis for having murdered a man.

It was, she mused as she went into the bedroom, quite unfair that she should have to play on people's faith in her like that.

She knelt in front of her clothes cupboard, opened it and reached deep inside, grabbing hold of a small box that was hidden behind shoes and coats. It was heavy, and its contents clinked as she pulled it out. She removed its lid and dropped the dogtags onto all the others.

People had too much faith, these days.