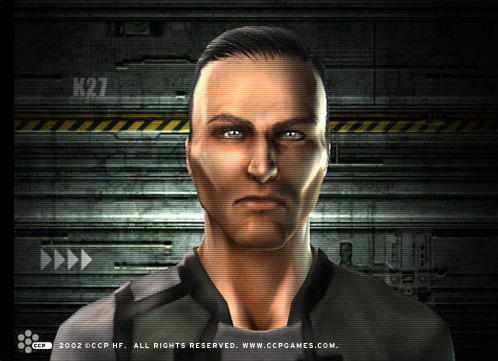 Sometimes Runia Tamarik felt that all she did was travel. Constantly touring from one place to another, with as little time as possible spent at each destination before dashing to the next. Not that she could complain too much about her vocation - she was relatively well off and had an easy job. Her years as an inter-stellar trader had given her contacts and information that elevated her way above the basic traders. She was especially proud of her connections with the Caldari, as they were very lucrative for her personally and also for her nation, the Khanid Kingdom. The routes from the Kingdom to the State might prove long and hazardous, but the profits more than made up for that.

Today, Runia was especially excited as she was about to meet a Caldari trader she’d never met before. The man was supposed to have good connections to some top-level people in the Caldari corporate structure. If true, this meant Runia might be in for some big bucks. Yet she felt a little trepidation, not because of the high-level contacts the man had, but because he was Deteis. This was the first time she had done business with one. Until now her only contacts within the Caldari State where Civire - she was used to their mode of thinking; straightforward, above-board dealings where everything was planned and perfected. She never had any troubles with timetables or broken assurances. Deteis were supposed to be different - more cunning, more underhanded. These, at least were the rumors she had heard. But usually they came from people - Dark Amarrians - that had no first-hand knowledge of the Caldari. Other traders she knew said that although the Deteis were in many ways different they still shared all the basic Caldari traits with the Civire - duty, discipline and sincerity.

Runia didn’t know much about the history of the Caldari; she knew that Caldari Prime - the old home of the Caldari - had several continents and that the different Caldari bloodlines came from different continents. Back in the days when the Caldari still occupied Caldari Prime the difference between the bloodlines was profound, not only in physical appearance, but also culturally. Runia suspected that the beliefs that the Caldari bloodlines were very different from each other stemmed from these facts. But when the Caldari had to leave their home planet and the long and arduous war with the Gallente Federation erupted the Caldari race as a whole was uprooted and thrown into a melting pot were fighting for their survival was all that mattered. The frantic decades that followed altered the Caldari psyche forever. Traits such as discipline and loyalty came to the forefront and shaped - and continue to shape - Caldari society into something completely new. The corporate state came into being, an all-engulfing machine that both nurtured and dominated its citizens. All the different bloodlines, Deteis and Civire the two largest, were affected by these deep-rooted changes and molded to the norm.

The effect was that the Caldari thought of them as Caldari first, their corporation came second, with the bloodline they belonged to a distant third. None of the mega-corporations were structured around the bloodlines and they intermingled freely on every social level. Although the bloodlines were proud of their heritage they didn’t feel it was an important aspect of their life. Inter-marriages are not common, but this has more to do with physical differences than anything else.

Runia was about to dock at her destination station - an industrial station belonging to the Wiyrkomi Corporation deep in Caldari space. She waited patiently while the docking sequence finished. As soon as she was able she contacted her new agent. There was no need to wait - she had already prepared herself many times over on the voyage over.

One hour later Runia undocked. Her new Deteis agent for the Wiyrkomi Corporation had been polite and to the point and shown no indication of being sly or untrustworthy. In essence, he was pretty much like every other Caldari she had ever met. Yet there were slight differences, for instance he had inquired about her home back in the Kingdom and shown genuine interest in all things Dark Amarrian. An inquisitive mind was not something she was accustomed to with the Civire, who were usually dull conversationalists. This feel of more personal interest pleasantly surprised her.

Formalities aside, her new agent quickly established their working relationship. And he gave her a task to complete. A very unusual task from her usual trade-related one’s. She was to track down a ship belonging to another Dark Amarrian and report her findings. Runia wondered again why the Caldari were so anxious to track down this ship. She’d been tempted to ask, but refrained from it - it was none of her business and the Caldari would have told her if it was important for her to know. The enormous reward further underlined the urgency. ‘Now, how to find this bastard?’ she mused. ‘I better have a chat with my buddies in the royal navy.’ As the chat link connection was being established she idly wondered how she could get them to help her without giving up too much of her reward.