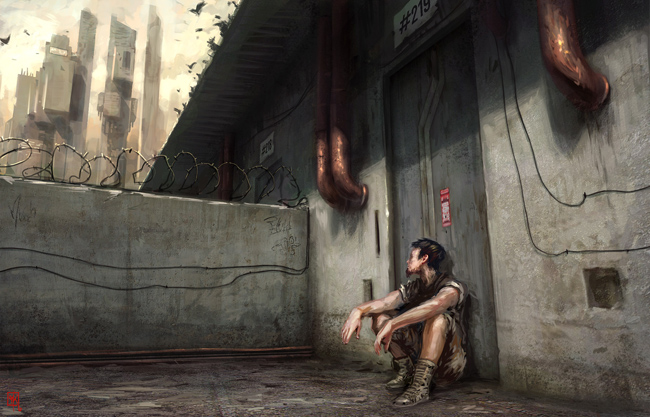 Antel falls down in the mud again. It's been raining for days in the forge, and the long slog from his quarters to the iron works is tiring his feet and chilling him to the bone. He hauls himself up to his knees and rests for a while before standing up. He's so tired these days, but his sense of purpose is unflagging and it's not long before he's on his way to work again.

This life fills a void in him, as it does with so many of the other Caldari here. They are working for the State and serving their purpose in bringing it to greatness. It is his job to do his part. Most people have the same attitude, though some find it harder going than others.

He has never given much thought to how this void was created, or how it might otherwise be filled. It's there, and the harder he focuses on serving the State, the less he feels its presence. This is where he is, and this is where he'll always be. He can only change reality in some small measure, through diligent work, but he can change his perception of the entire world, and he chooses to serve.

He only wishes he wasn't always so tired.

The rain drives down. Antel overhears some people muttering about cold air and bad heating and the broken-down railway line that should've been fixed like so much else in this place, but he tunes it out.

A loudspeaker sounds as he approaches the factory grounds, blaring out his group code. He approaches a guard and asks what he should do, and the guard tells him that there was a mine crash in the night. They need people to clear out the rubble and anything else left inside. Antel has a lot of experience with this particular mine. He worked it for years, him and his friends.

With a sick feeling in his stomach, he heads over to the mine and meets up with those still living. They're given excavation tools and measuring equipment, and told to run checks on the infrastructure.

They proceed into the mine, which has been shored up. They find it in better shape than expected. Explorers are working in pairs, and Antel works alongside Foraani, a dependable man he's known for years. They know each other and the mine so well that they can move in silence, placing markers and inspecting fixtures with ease.

The mine is in decent shape, but the body they find is not. It has been crushed so thoroughly by a falling girder that there is little recognizable left of it except the head, which lies a little to the side. It seems almost untouched above the neck, something that strikes Antel as grotesque for a reason he cannot explain.

They peer closer and find that they recognize the face; it is an old friend from their shared time in the mining days, a man who never quite managed to get promoted out into the open air. Antel goes utterly cold. Foraani turns very white but says nothing, either, though he starts nodding to himself. He keeps doing it, even as they clear out the room and keep inspecting the mine, and when they emerge at last, he is still nodding almost imperceptively, and wringing his hands. They go their separate ways without speaking.

Antel is told to take the rest of the day off. He obeys, and takes the long walk back to his living quarters, where he returns to his bunker, files a work report, then removes his work clothes and puts them in the cleaning bag. He takes a shower to get rid of the smell, puts on fresh work clothes and goes out behind the bunker, staring hard at the grey, muddy ground and breathing deep. He closes his eyes, is seized by vertigo, and opens them again, still staring at the ground. It's like clay, and the pink flesh of his hands stands out in contrast. He feels outside of himself and, for the first time, feels like he belongs to something he is no longer a part of, like his friend's head, untouched but without a body, staring in blankness at the grey ceiling above.

Night. It takes him a long time to fall asleep. He feels that he should be mourning his friend, but for some reason he cannot. It takes him a considerable amount of time to come to the conclusion that he no longer views himself or anyone around him as an individual, but merely as a bolt in a ship, a cell in a body, a wheat stalk in a field.

It has been a long time since he last saw a field.

When there is acceptance of one's fate, and of one's place in the body politic, one finds peace. One does not mourn the loss of another cell, because it means the body is renewing itself, cleansing itself.

At last he sleeps, finding solace in dreams about the past.

At work there is little talk, though in sequestered corners people are discussing yesterday's tragedy and others like it. Antel hears one say this is the last thing they're going to take, and hears another tell him that he needs to wait a little, that they've got plans. When he tries to listen in, they move away. The ironworks belch black plumes of smoke into the sky, turning it a little more grey. It has stopped raining.

He feels completely isolated. He is a Caldari first and everything else second, but he cannot stop seeing his friend's face. He hasn't eaten a proper meal in so long that he's no longer sure such a thing even exists. Nobody buys Gallente luxuries anymore, and they're not available on the market anyway, not for people like him. There is nothing to do but walk through the day like a cell flowing through the body, doing what needs to be done, and fulfilling its purpose.

At one point Foraani comes up to him, still as grey as the metal sky. He explains to Antel that something is going to happen and asks if he wants to join. He adds that the others don't trust Antel, but he's known him for years and years and knows he will not let down the cause, and that after everything that's been done to them in all that time, he cannot imagine Antel can go on anymore like this.

Antel asks if their lost friend caused this, and Foraani says that he did; the company should have taken more security measures, and their entire attitude in this has opened his eyes to how thoroughly everyone is being abused. Antel asks Foraani whether he does not want to serve the State any longer, and Foraani says all he knows is how to serve, but a worthy cause needs worthy masters. He asks Antel whether he will join them, and Antel says that he needs time to think about it. Foraani looks at him for a long while, then nods once, says that he has less time to think than he realizes, and leaves.

At last he gets up, calmly walks out and behind his bunker, barely catching a glimpse of the grey ground before his pink face opens its mouth and the pink contents of his stomach erupt from his pink body and splatter on the ground. He dry heaves a few times more, then spits off the strands of saliva and walks unsteadily back into his bunker, to sleep. He dreams about the future, and continually wakes up in cold sweats. He knows that something has gone wrong with him, but doesn't know what, or whether it was wrong all along.

The last time he wakes is an hour before reveille. He lies in his bunk, his thoughts flowing past as intangible and unstoppable as a rushing river. There is a void in him now and the thoughts pour into it, circling it like a funnel and hammering at all sides, hollowing it out even further. He had tried to fill it with his love for the Caldari and his servitude for the State, but now it seems bottomless, unyielding and hungry for something else. He is here - he will always be here - but he no longer knows with certainty if his place truly is here, though he has no idea where else it should be. Even if he transfers his allegiances to another cause, thereby betraying everything else he stood for, he doesn't know whether it will fill him up any better than before. He wonders whether a cell can switch bodies mid-stream without self-destructing in the process.

It occurs to him that most of the effort is on his side, has always been on his side, and that sometimes you can put in so much effort that you effectively become what you're trying to uphold, giving yourself to it as if the cell had become the body.

His stomach hurts. He rises and walks to the window. It's not grey outside, but orange; the sun is rising and the industrial works are bronze-colored with its light.

Anyone who tells on a coworker will be rewarded. Rebellions are crushed mercilessly. Those who attempt them are not true Caldari, Antel has taught himself, but traitors who want to ruin everything the State has built.

Antel cannot help but wonder how it would feel to be the body and not merely a cell; to be the field growing slowly in the orange sun.

He goes to work. At some point during the day, he meets up with Foraani and tells him he'll take part in the rebellion. He swears a simple oath, for everything is simple in this place.

Night again, and he sleeps soundly. He dreams about the present, about the sun on the fields below; about floating away happy as a cell carried by the torrents in a body of his own making. When he awakes, he feels light, for the first time in years, as if the wind could blow him away.

He wakes up a betrayer, and heads out to work. On his way to the forge he deviates from course and eventually finds himself outside a guard's cabin. He stands in front of it, his eyes closed, head tilted up towards the sky. He realizes that anything beyond himself is no longer part of him; it is the body's to think about, and not the cell's purpose to question. So he can go into the cabin, or he can move on, a betrayer either way.

And in that moment it hits him with a force so hard that he is brought to his knees: he has a choice in this, he is in a current of his own making, and whatever he does truly will affect only him, in his own cell, in this body that by extension is his, too. Nothing matters beyond that context. He is going to betray something, and in doing so he is going to rise beyond the cell, acknowledge his own endless efforts, and at last become the body proper.

He walks into the cabin and tells the guard all about the secret plan. The guard listens intently all the while, saying nothing. When Antel stops speaking, the guard tells him that there are more people who knew about this plan than Antel realizes. Then the guard pulls out a gun and points it at Antel.

He is in the field. He is here at last.

The guard says something, but Antel is too busy smiling to hear him. He has become the body.