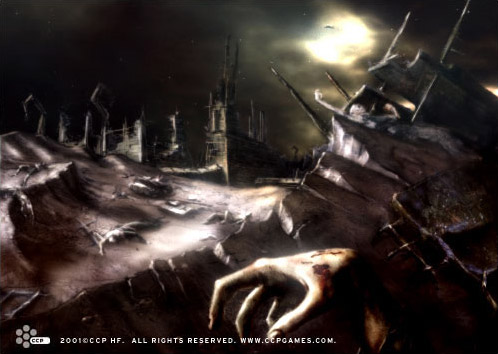 In the deep recesses of the Taisy system lies a lonely mining station called Kyonoke Pit. The station, built 40 years ago by a Caldari mining company owned by the Hyasyoda Corporation, was at that time the largest mining and refining station of tasc (twin atomic superconductor crystal), the core component of inter-stellar communication devices.

For years the mining operation went smoothly and Kyonoke Pit soon became one of the most profitable mining stations of the Hyasyoda Corporation. Kyonoke Pit is located on a huge asteroid and as the years went by the mining shafts dug ever deeper into the heart of the asteroid.

Five years ago the space tower orbiting Taisy Prime received an emergency signal from Kyonoke Pit. An epidemic of some sort had broken out on the mining station and the crew was dying rapidly. The tower personnel lost contact with the Pit a few minutes later and were unable to re-establish it.

A scout ship was sent out to investigate. On its arrival at the Pit, no lights were visible on the station and no life-signs were detected. An emergency team, clothed in protective suits, that was dispatched into the station was greeted by the horrific sight of the station’s crew strewn all over the place dead and decaying. The mask of agony on the men’s faces spoke volumes about their last terrible ordeal and the garish red spots on their bloated bodies clearly indicated that the cause of their death was by poisoning or some sort of a plague. It was clear that the infliction had surfaced suddenly and slain the crew in a matter of minutes.

The emergency team reported their findings to the scout ship docked outside and then continued exploring. Some two hours later members of the emergency team started complaining about discomfort and the captain of the scout ship ordered them back to the ship. But on their way back the team-members collapsed in agony - it was clear they had caught the deadly malady despite their protective suits. The captain, fearful for the safety of himself and the rest of the crew, detached the ship from the Pit and left the station while the rest of the emergency team died on the docking ledge.

Thus began the story of the Kyonoke Infection - one of the most deadly and mysterious pestilences man has come into contact with. The Caldari authorities sealed Kyonoke Pit off a few hours after the incident described above. Further research was made with great care and the results were not heartening. A biological speck resembling a protein causes the plague. It enters the body through the respiration system and then enters the blood stream. From there it moves to the brain, where it germinates. In its advanced state, the protein speck enters the medulla oblongata, where it infects the nerve cells very rapidly. The host quickly loses control over all bodily functions, accompanied by a great amount of pain, finally resulting in heart- and lung failure within the space of a few minutes. The specks can survive in an advanced state for a few days; they can leave a dead host and enter another living being close by, in such cases the new host dies within a few hours once the speck has reached the brain.

The speck can also be found in a basic state. As such, it can lie dormant for years and it can survive in extreme environments and conditions. When it enters a living being it usually starts developing to its advanced state, but this is not always the case; it can also lie dormant within a person for a long period of time. It can also enter the brain and start infecting proteins there, slowly but steadily killing the host by eating up its brain over a course of few months. This dual nature of the bio-speck makes it even more of an enigma, not to mention more dangerous.

It can be safely deduced that the biological speck was accidentally uncovered in the bowels of the asteroid Kyonoke Pit is on, but whether it originated there or not is impossible to tell. It is virtually impossible to detect the speck in a person, due to the fact it resembles normal proteins to such a high degree. This has led to speculations that the speck evolved in humans or was even manmade a long time ago, but these speculations have never been substantiated. In any case, because of the difficulties in detecting and tracing the bio-speck and because it has 100% fatality rate, the bio-speck has fascinated both military researchers and terrorist groups, both of which are eager to get their hands on the speck.

The space tower of Taisy Prime has today been converted into a huge research facility, where the Caldari are fervently trying to get to know everything there is about this curious biological speck. Kyonoke Pit itself has been sealed of and remains in a permanent quarantine. Caldari police vessels guarding the mining station make sure that no one without the proper authorization is allowed near it. Some two years ago an unknown group managed to infiltrate the security parameter around the Pit on two ships and entered the station. In addition to acquiring samples of the bio-speck, the group loaded their cargo holds with the highly valuable tasc from the station’s vast storage vaults. But on their way out the bandits started showing the symptoms of being infected by the deadly protein. One of the ships crashed back into the Pit after disembarking, severely damaging the station and completely destroying the ship. The other ship managed to escape the investigating Caldari vessels, but it disappeared without a trace in an asteroid field and has not been heard from since. Today, debris and dead bodies from the Pit float around it, making it even more hazardous for ships to approach the crumbling mining installation. This, and tighter security measures by the Caldari, have prevented anyone else from making a raid on the Pit.