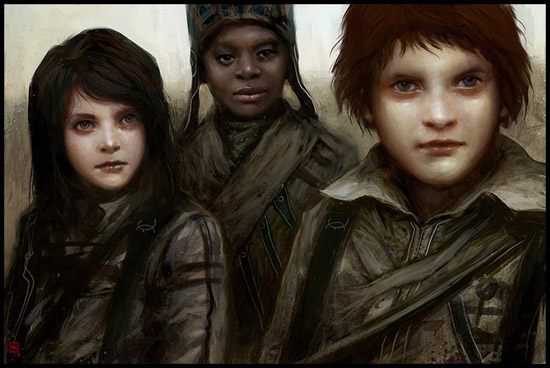 Throughout its history, the austere Amarr Empire has conquered many peoples. In its expansion it has encountered fractured Neolithic tribes, egalitarian societies, industrial behemoths and everything in between. All were crushed and enslaved: Some were eventually integrated into Amarrian society, some remain slaves and others were simply forgotten - for only the largest societies are recorded in any detail. On the Ni-Kunni homeworld, for example, one whole continent was inhabited by a fierce indigenous people who were judged worthless for anything other than the most lowly slave castes. Their rich culture and heritage has long since been eradicated and their people reduced to mere half-breeds scattered among the countless multitudes.

With improved military oversight, this tactic of burnt earth and ruined people eventually changed . In its conquests, the military made note of the most naturally warlike, aggressive and resilient and dubbed them Martial Races. It then indoctrinated these into its armed forces, mostly as expendable cannon fodder to be used up instead of the righteous chosen of God. Some excelled, and achieved such repute that they became a staple of the Amarrian military machine. The most successful - and, indeed, feared - of these are the Kameiras.

The Kameiras are one of the products of the infamous Human Endurance Program (H.E.P.) that the Amarr ran on their Minmatar slave populace. It began as an attempt to measure the Minmatar tribes' durability and effectiveness when it came to various labor tasks - to see how far they could be pushed before breaking, much like a tool would be stress-tested. Over time it evolved into much more than that, becoming a tale of horror for the Minmatar as Amarr scientists began to explore the true limits of their body and psyche.

The program came to the attention of the military who, having witnessed the tenacity and ferocity of the Minmatar defiance first hand, were keen to explore their uses in combat. The H.E.P. scientists, eager to get military backing, began research into methods to re-educate the strongest Minmatar slaves and train them into obedient, effective soldiers. Disappointingly, initial training methods proved mostly ineffective. The idea was thought to have merit, however, and a dedicated team was assigned to advance the program.

Finding it difficult to train unruly adult Minmatar warriors in obedience and faith, the team opted for a more extreme measure. They began a breeding program, selecting the best specimens from their slave population and creating the strongest of offspring, raising them according to a scientific regime they had devised. The regime went through several revisions based on data gleaned, and was altered considerably in the initial stages until it became the Kameiras program that exists today.

Every maturing fetus of the breeding program is rigorously monitored, subject to a series of genetic tests to see if it is developing to the exacting standards of the Kameiras. If the specimen is found to be genetically unworthy – if it would be born short, weak, sickly or afflicted with any of a multitude of genetic abnormalities - then the pregnancy is terminated. Any surviving neonates are given over to a specialized care centre where Amarrian females take responsibility for their upbringing in supervised crèches until the age of six, whereupon the infant enters its first Subigo House, a place of training and education.

Here the subject begins a vigorous physical regime. The Amarrians have learned that this is the most effective time to begin adapting the Minmatar body for military duty. Increasing in pace and vigor as the body grows, the training regime pushes the child to an established limit that will not adversely affect its later growth. The youth is schooled in combat arts and forced to attend an extensive indoctrination program. This program forms the foundation of maintaining control over the Kameiras when they are fully fledged adults. They are institutionalized into the Amarrian faith - taught about the Amarr God and his love for them, their place in his creation and their duty to uphold his law for the good of all. For all intents and purposes, they are taught that they too are Chosen. Although this continues to be a hotly debated topic within certain circles of the Empire, time has proved it to be the most effective form of control.

Most survive the rigorous Junior Subigo and undertake the testing trials at the age of fourteen. If they survive this tortuous experience they are moved onto the Senior Subigo House, where they are divided into combat-sized groups. In teaching them to act as part of a greater whole, their instructors take their training to a whole new level: The young neophytes are schooled in a wide range of skills including strategy, tactics, survival, personal combat and the use of firearms, body armor as well as wide range of military equipment and vehicles. If they survive this intense period they then undertake the final and most testing trial. If this is passed, they are accepted as adepts; if they fail, they do not return.

At the age of nineteen the trained Kameiras adepts are indoctrinated into their operational unit and serve as junior members until they have blooded themselves in combat. The Amarrians retain strict control over the Kameiras, as they have by necessity raised intelligent soldiers that can react and adapt autonomously to varied combat situations. Their education nearly always keeps them from questioning their place. A soldier sees much, though, so the Kameiras do not serve as one company but rather are attached to standard armed companies as their strike force, maintained apart from the regular infantry. The very nature of their purpose - to serve as special operation units and front line forces - means that in the very rare cases where a Kameira might suspect something is not well with the world, he doesn't remain alive long enough to act upon it. That being said, it is often true that the Kameiras troops are more devout than their true Amarr cohorts. They have been indoctrinated and trained for this way of life since they were born, and they know or want nothing else. For the most part, Kameira units are led by Amarrian officers An individual may be promoted some way up the command chain if he is deemed loyal enough, but these cases are relatively rare, and individuals that achieve this sort of modest rank are kept under close surveillance.

However, certain traits tend to creep in. Most are relatively trivial things that are easily brushed aside by their officers; for example, Kameiras troops are allowed to keep their hair long, something not permitted and strictly enforced in the regular Imperial army. There is one tradition among the Kameiras troops that is particularly abhorrent to the Amarr, who have banned it in theory and only relented in practice due to negative effects on morale of the otherwise indomitable Kameiras units. Thus, the tradition is officially banned, but under the furtive light of dark moons it continues.

In the aftermath of battles, Kameiras gather what bodies they can of their fallen and burn them in great funeral pyres. This is done in a matter-of-fact way, without emotion. Once the fires have burnt out the surviving Kameiras cut themselves and then rub the ash from the pyres, the ashes of their dead brethren, into their open wounds. In this way, a permanent mark is formed. The Kameiras carry their dead with them, and the mark serves as a lasting reminder of those who fell. An old soldier may have many scars of the lost covering his body and in this way can come to look akin to his free Minmatar brethren. No one knows how this tradition crept in - not even the Kameiras themselves - but it now persists throughout all units in the Kameira war machine.