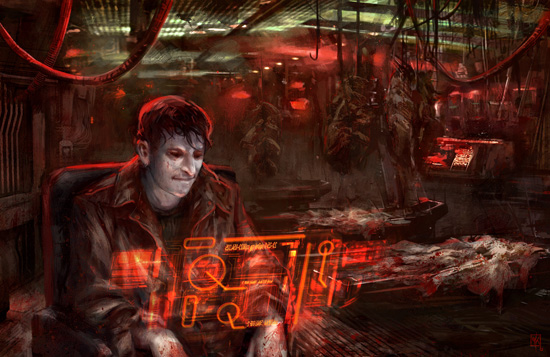 They were finishing up a patrol in EC-P8R when they were told of fresh meat.

Antar's team had been doing hunt-and-grabs for a while now, and he had become a natural at Bleeding his victims. The experience depended on one's training, origins and constitution - common wisdom held that anyone who didn't pale and grow nauseated at their first time of hooking up live bodies was either perfect for the job or too crazy to be allowed on a spaceship - but for every Raider there eventually came a point when, even if the horror of the thing lurked at the back of one's mind, it had at least become a tolerable experience.

It was not about suffering, although that could certainly be a part of the process. It was done as much for the victims as for the Blood Raiders themselves. Antar loved seeing the full spectrum of emotions they went through: From utter and abject fear, through disgust and hatred and denial, even bargaining and making offers, stunning offers; all the way to calm acceptance and a quiet, gently fading serenity. He was making them whole at last.

He checked the equipment they'd set up on the ship, which had not been his when they boarded. Vital signs were stable. The sterilized containers were slowly filling.

It was about completing a cycle, really. He mopped off some stray drops of blood, and stroked the cooling cheek of one of the people he had met on this journey. Everything was a journey. It was amazing. He didn't want to reach the end, ever, even though he felt uneasy whenever he wasn't hurtling down the path towards it.

The ship had turned so quiet. All Antar heard was the shuffle of his fellow Raiders, moving about between the donors in repose. He envied those donors. Antar had been one of the Amarr Empire's chosen ones, a Holder in service to the Lord and the Empire's Chamberlain, and he had thrown himself into the role with fervor. But the part had been only that; a section of a whole, insufficient to fulfill his needs. The more he sought piety, which was a road without end, the less he felt like a human being. The honor and the faith had granted him only half a life.

An encounter with Chamberlain Karsoth had changed everything, and given him access to the other side of life. He had discovered not only entire new vistas of existence to explore - of indulgence in sin, of terror in extremity - but, in this new darkness that fed him, he had found completion of the pious side, too. At last he could fill in the gaps of good that had been missing all along; giving mercy, for instance, to the victims of the Bleeding, or making sure that they could hold their children in their arms during their last moments. It was a work of delicate care, far more so than outsiders might think.

Which made the message he'd just received all the more interesting.

Antar was told to have his team immediately break rank. They were to take two ships and follow a Sisters of EVE vessel that had departed the Sisters HQ for some unknown destination. They were to shadow this vessel on its journey, making sure not to attract its attention, much less try to harvest it. And they were to go right this minute, leaving the uncompleted Bleeding to a replacement vessel that was on its way.

Despite Antar's annoyance at leaving a task unfinished, he was excited. Everyone liked the manic thrill of the chase, even if they had to stay hidden. The Raiders traded in image, and it was not unheard of for ships to simply stop moving when they arrived on the scene, waiting instead for what they hoped would be a painless death. Others would fight back viciously, and the utter terror in their eyes when their ship was finally boarded gave Antar such an adrenaline rush that he often tasted blood in his mouth.

They were used to being a bit more subdued when the Sisters were involved. The Raiders called the Sisters their "little hunters" and had learned to heed their movements, tiptoeing around them if necessary. It was a parasitic relationship that darkened the Sisters' name and greatly shamed them, and it was kept in utter silence among their faction, for which Antar truly pitied them. Where the Sisters went, there would be injury and hurt, terror and fire; and there would be blood.

Nonetheless, nobody on his committed team liked leaving a task unfinished. Their leaders knew this, and there was a tone of urgency in their new order that registered with Antar. He ignored the grumbles of his team and the whispered pleas of the bleeders, packed up whatever gear he needed and left the ship to its fate. Soon they were off, the remains of their collective annoyance giving way to the quietly brimming excitement of the chase.

And then they ran into the goddamn Thukkers.

One of the captains leading the Thukker protective force was named Kotan, and it was his lot to meet the incoming threat.

He was part of a team flying protection for a small caravan of traders and merchants, all on their way to check out the new arrivals in the Great Wildlands. Thukkers lived on the move, passing from system to system in a great, unending exodus of motion. They were as close to living off the land as anyone could be in this dead wasteland space. Kotan cared greatly about his people - a dangerous quality not many people can truly say they possess - and did not want them to come to harm.

So when he spotted the Blood Raiders, he immediately took his team on the offensive. In his mind the Raiders were like leeches, completely impossible to detach once they sunk their poisonous feelers into the flesh of their prey. Kotan hoped that a powerful offensive would hold them off long enough to save the caravan, or at least keep them from calling in more troops.

They started the fight, and it was the strangest one Kotan had ever been involved in.

The Blood Raiders charged as they always did, fearless and mad, but their maneuvers were far from the risk-taking insanity Kotan had learned to expect from them, and their laser fire was highly conservative. They immediately locked on to almost all ships under Kotan's command and started firing, an action that hopelessly spread their cumulative power. Kotan's own vessel found its shields dented somewhat, but nothing of any concern.

It got stranger when he pushed on with the offensive. The Blood Raiders took their hits, as they always did, but the moment Kotan managed to down the shields of one of their vessels, that ship would retreat from range even at the cost of its own accuracy. Kotan called in reports from other ships around him, and they all reported the same situation. The Blood Raiders did not want to fight. They were putting on a show.

He ordered his own forces to back up and see what happened. The Blood Raiders followed, but retained the strange dispersed attack that still wasn't doing anything at all. They still allowed Kotan's people to hit their shields, but not a single dent had been made into their armor so far. And as the Thukker forces retreated, the Raiders still did not move in for the kill.

They did not want to be here. There was no other possibility in Kotan's mind. They were on their way to somewhere more important, somewhere that offered bigger rewards than an entire Thukker caravan full of innocent people, and they were putting up a mock fight so that the Thukkers wouldn't catch on.

Kotan did not like that. Nor did he like the realization budding in his mind, that he could not merely fight off these horrors only to go back to protecting his own people. He had seen what happened to those who fell prey to the Blood Raiders, and what remained of them after they had been used up and sucked dry. The thought that they might be on their way to do this to someone else, no matter who, was too much to bear.

At the same time, something else rankled him about this. The Blood Raider force would give anyone a challenging fight, but he had no idea where they were headed, nor who to warn of their arrival. They could have passed him by and the most he would have done would be to warn the Sisters of EVE, the one force whose mobility came anywhere close to the Thukkers', that there might be a bloodbath. But the Raiders apparently wanted to continue operating under cloak and darkness.

This was wrong, Kotan felt, and it could not be dealt with using normal means.

Thukkers were trained to handle unforeseen circumstances, and encouraged to rely on their judgment and intuition. There was only so much systemization you could nail down in an intangible society. Even the most diligent of captains would eventually find him- or herself out in the middle of unknown space, faced with a completely unexpected situation and pressed to make a decision based on insufficient or unreliable data. You did what you needed to do, and you didn't hesitate in taking action. This was being a Thukker.

The Blood Raiders let their shields drop low, as Kotan knew they would, and eventually retreated. Kotan ordered the other vessels on his team to return to the caravan and protect it, and had his own ship do the same. Once the Raiders had nearly dropped out of sight, Kotan ordered the ship swung around and sent a brief note to the caravan leader that he was off to investigate an anomaly. To his surprise, another fighter broke rank and followed him. He sent off a message informing them that they were free to return to the caravan, and the captain of the other ship, who had served with him for a while, replied with a message that stated, quite simply, they were damn well free to go on wild goose chases, too.

Kotan grinned at that as he set off to follow the Raiders. He had his screen show him the caravan, which slowly disappeared from view as they started their hunt. It felt like he was leaving more behind than he could ever imagine.