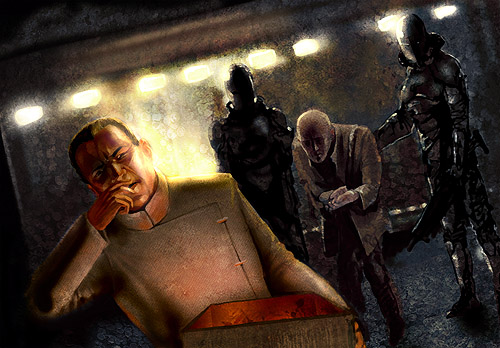 Once he'd had the remains of his ship towed into the docking bay, Auduban disembarked with the box. He could hardly think straight at this point; all that remained in his head was to get the light, the burning light, to as many people as possible.

He staggered to customs, hoping he wouldn't be picked out. He wanted a public place, with lots of people, for when he opened the box.

Customs stopped him right away and pulled him aside.

They asked him what was in the box. He stared at them, trying to think of something believable to say. Whatever it was he eventually blurted out, it wasn't enough. One of the customs people took the box from him, set it on the ground and opened it. The man's eyes grew wide, his mouth dropped open, and his face turned ashen.

Auduban sighed, reached into his pocket, and clicked a button on his small remote.

The box lit up with the burning light.

His sect had used Fedos as part of their cleansing rituals. He would now use them to cleanse himself, to purify for the task at hand.

He lay down in the ship's main corridor, naked and cold. He was having trouble keeping his balance, and strange images constantly floated through his vision, but it was all right. The Fedos needed no guidance.

This was goodbye. This was the burning of bridges. Auduban's friends were no longer talking to him, and his family had thrown him out of the house. His fascination with the Amarr had been fine with everyone - it was good to know your enemy - but when it morphed into infatuation, things changed.

The snow crunched under his boots, and the spaceship ahead reflected a blinding glare.

He was leaving now. With her. For the new life.

The ship had nearly imploded. Half its controls had blown out, and most of its infrastructure had been torn to pieces like paper in a storm.

The crew was dead, and what remained of their bodies had been scattered over the entire ship, burnt and shredded almost beyond recognition.

Sanada was dead, too. Auduban, who had just barely survived the blast, found what was left of her in her quarters.

Deep in the bowels of the ship, surrounded by humming machinery, Auduban got to work. He jammed, twisted, cut and hammered each rig into its proper location, with the occasional help from heavy tools. It was ugly, ugly hackwork, but it would simply have to do.

This was the tenth station in as many days, and yet again they'd had to flee. They were exhausted. Each time, they'd been run off by angry protesters. Apparently there were some who were angered by the apocalyptic message they preached, not realizing that desperate times called for desperate words. Much to Auduban's disappointment, some of those protesters had been Amarrians. One or two had yelled at him for being a Minmatar, which he didn't mind, but the rest had focused their anger on Sanada, accusing her of zealotry and extremism. Auduban couldn't stand that. Instead of giving proper, constructive criticism against the message, they chose to harangue the beautiful messenger.

It had gotten too much for some of Sanada's followers. The group, already small, was dwindling now. Auduban's devotion, already fierce, grew to fill the gap.

By the time they got to the eleventh station, the crew had shrunk to a third of what they'd started with, and of the several support ships that had followed, none remained.

It was getting a little harder to breathe. Auduban could still move and think, but any time he turned his head a little too fast, the whole deck started spinning.

He was the only human survivor. The Fedos, though, hadn't just lived; they'd prospered. Their containment fields had broken, and now they were crawling all over the ship, gorging themselves on crewmember parts, and breeding.

Auduban didn't mind the Fedos. As the ship's garbage chutes were bent and broken out of shape, the animals were the only option left to get rid of much of the trash. Usually the stuff'd be shunted into the ship's exhausts and burned to dust. Now the Fedos ate it.

In the storage room were several unused rigs that Sanada's crew had liberated from other vessels. Rigs were permanent alteration kits for ships; they improved the output of various subsystems such as shields and weapon controls, and once inserted could not be removed again. The insertion was only supposed to take place under controlled conditions, preferably by a qualified professional.

They didn't have qualified professionals here, and certainly didn't have controlled conditions. Auduban had a little mechanical expertise, enough to know where to plug in the stuff, but that was about it.

He picked up a few rig units and headed into the heart of the ship, unsure of what he was doing.

The ship's atmospheric controls were malfunctioning. Auduban figured it wouldn't be long before they gave out completely. Perhaps they'd have just enough left for the ship to hobble back to the nearest station, but he didn't care. There was nothing for him there anymore. Nothing at all.

"Nothing I say will work," he said in desperation. "There's no way I can carry our message the way you did."

She fell silent at this.

"What did you see in me?" she asked. When he hesitated, she added, in a gentler tone, "How did you see it? What was it that moved you beyond words?"

He thought about this. Eventually, he said, "The light in you. That's the best I can do. I looked at you, at your face, your eyes, and it was like you had an inner light, suffused with purity, that shone through. And everything it illuminated became a part of you."

"Big words," she said, and he smiled.

"I wrote it down once," he explained. "Still remember it."

"Then we need to let them see the light," she said. "The light that shines from me."

He nodded. He looked around, casting for ideas.

That's when he saw the flashlight.

On his way to the ship's core he passed the Fedo cages. Fedos were small omnivorous animals, little more than a nervous system with a stomach, and looked like slabs of meat with feelers. They had no sight nor hearing, communicating by smell alone, and were used extensively for ship cleaning, their main diet consisting of the waste that always accumulates on closed vessels. They were kept in separate cages when not in use, as otherwise they'd breed endlessly and fill up the ship. They were a reviled but vital part of any prolonged stay in space.

Auduban squatted in front of their cages. There was something so calming about watching them squirm and wriggle. He wondered if humans felt more pleasure than lesser creatures like this, if the complexity of the human mind allowed access to a deeper kind of enjoyment in life. On the other hand, perhaps simplicity was the key to pleasure, in which case creatures like the Fedos were way ahead of the game. They could feel any kind of pleasure with far more purity than humans could, unfettered as they were by complex emotions and doubt.

He realized that he'd been overcomplicating his situation. They needed money, they'd get it from pirates, and so they needed a stronger ship. And he had the solution right here. Straight line of logic, from start to finish. Anything else was only a distraction.

He walked on, rigs in hand.

One day, Sanada began to speak to him. "We need to bring them the light," she said, her voice resounding in his head. "With all the force we can muster."

"I will bring them the light," she said. "But I need your help."

Through the haze of infected air and Fedo stink, he tried to clear his mind. "What can I do?" he asked.

Since the Fedos had so much to eat, their emissions greatly increased. Auduban didn't mind the stink so much. But coupled with the increasing lack of air, it was beginning to make him feel quite odd. Quite odd indeed.

Once he had the rigs in place, he put away the tools, said a silent prayer to Sanada, and headed to the control room, where he sat down at the main control table. He wasn't a crewmember by any means, but he'd watched, and he knew which buttons activated what.

He pressed one. Nothing happened.

He sat back in his chair, rubbed his eyes and thought about his next move.

Then he heard a spark, somewhere. Then another, and another.

There was a brief moment of utter stillness. Then the rigs went active, sirens blared, and the explosions started.

It was just the two of them now, along with the ship crew. The rest had fled. Sanada was capable of commanding the ship, with Auduban's help, but they were running out of money for the crew and would have to think of something soon.

While Sanada slept, Auduban sneaked out of the living quarters and into the storage room. They had all sorts of equipment in there, some of it acquired through illegal means, and had been planning to sell it, but no station would let them dock. The only option remaining was to fight space pirates and claim their bounties, but the crew had absolutely refused, saying the ship had no chance in combat unless it had some kind of ace up its sleeve.

In a quiet moment, Sanada had recently said to him that she was running out of hope, and on the verge of giving up.

Auduban wasn't about to let that happen.

This was the end of the world. This was the fall and the shame, the final mistake, the plunge into unforgivable darkness.

Auduban cradled Sanada's head in his arms. Her torso was nowhere to be seen.

His sect had been removed from the religious order. Apparently they'd gotten too radical, too extremist even for the Amarrians. Sanada didn't care; she said they'd take to the stars again, preach the word. Some people were unhappy with this, but for Auduban, there was no question: He would follow. He loved Sanada like he had never loved anyone before. It was a love so pure it transcended language and, almost, emotions as well: It burned so fiercely inside of him that it felt like a tangible force, immune to thought and deed. Everything she said was truth, and everything she did was right.

With her instructions echoing in his head, he began working the ship on a course to a station. The vessel was a wreck, and Auduban doubted he could even make it past customs with the box, and Sanada's head inside it, but he had to try.

The Fedos crawled over him. Their emissions felt like perfume.

He scratched the first one behind the calciferous ridges on its back. The Fedo, excited, scrambled higher onto his chest. He kept scratching, but his fingers slipped and poked through, into its soft meat. It didn't seem to mind. He could swear that it was vibrating from pleasure.

He felt as their mouths, with their tiny rows of coarse, serrated cartilage, suckled at him, cleaning, looking for nourishment.

The one he'd scratched was now at his right nipple. He closed his eyes and sighed.

Once he'd inserted the flashlight, he put the lightgiver into a box. He'd rigged up a remote for it.

He tested it, clicking the remote.