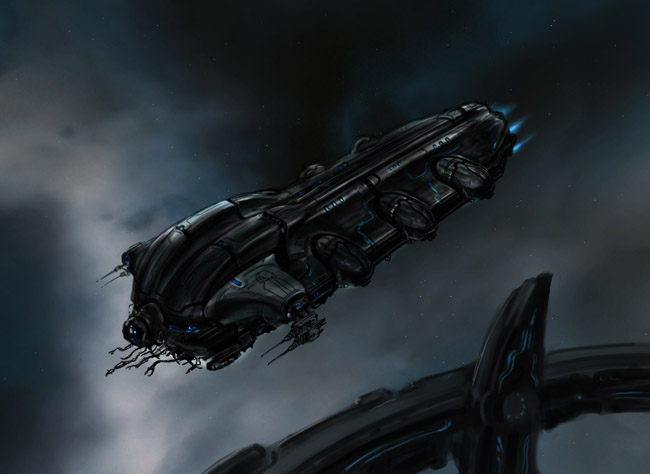 The noise was getting louder, and the air was running out.

"What the hell was that thing?" Now that there was nowhere to go, Karin couldn't stop herself from pacing.

It had torn through her ship's hull like it was tinfoil, exploding out into the vacuum. She'd seen it on the camera feed, bursting through the reinforced bulkheads of the central hold, and finally understood why Dagan had wanted a camera trained on a goddamn inert drone.

God, he was probably dead, too.

Of course, he could come back. The rest of them weren't that lucky.

"You're so damn calm all of a sudden. You're gonna die, too, you know." Neral was quiet, leaning against the wall where Karin had arranged her. Her eyes were closed, but her breathing was shallow, her face sheet-pale.

"It seems quite likely, yes."

"You'll be free of them soon enough, hmm?"

"The hell is wrong with you?"

"I've done what I had to do. There's nothing left."

The clang of metal on metal reverberated through the ship, over and over. Something was beating against the wall of their little harbor, and knowing what it was wasn't making her any more comfortable.

It was getting louder. She'd swear it was almost through the bulkhead.

"Who? Who--" Karin's words cut off, eyes widening as she saw Neral's gun. "Are you crazy? You can't shoot that in here!"

"Can." And the report filled the room.

Karin slowly, cautiously opened her eyes. She looked over at where Neral had been sitting, then quickly looked away. She turned her face away from the ruin that had been Neral, and faced instead her own destruction.

It was almost through the door. It was--

"Hello! Anyone alive in there?"

Karin dragged Neral along the hallway, her progress painfully slow. She'd found the woman with a chunk of shrapnel in her gut, and Karin couldn't just leave her lying there. Her ship was collapsing around her, nothing she could do about it, but she'd be damned if she was going to let her ethics go the same way.

And now she was trapped in the twisted wreck of her ship with a dying woman.

A dying woman and that noise.

The terrifying shriek of tortured metal and the groaning vibrations of the hull as it collapsed were bad enough, but it was the steady, metallic banging against the thinnest bulkhead of her accidental prison that was really freaking her out.

She really wanted to be thinking about something else.

Her mind caught on a story from her childhood, of monsters in the depths of her homeworld's seas—

No, that wasn't any better.

-- arms reaching out to strangle whole vessels, down under the weight of fathoms of water, death as certain as--

"Tahaki Karin," she thought, "you snap out of it this instant."

She contemplated the bristling heap of metal shards ahead, bent and broken support beams and plates barricading what should have been a hallway.

She set Neral down gently, tried to slow her breathing. Normal. Do a mental inventory: What do you have on you?

She could get some of the debris off one of the interior walls, find a way around, get them to a pod--

When everyone’s eyes were glued to the security feed, watching Dagan’s precious drone burst free from the ribs of their ship, it was Communications Officer Neral’s voice they heard over the com.

She sounded just as calm telling them to abandon ship as she always had announcing an incoming transmission.

It made it all the more surreal when Karin discovered Neral bleeding out in the ship’s corridor.

She’d suffered a massive stomach wound, and judging by the trail she’d left she’d barely been able to pull herself over to the wall.

Karin crouched by Neral’s shoulder, reaching out to check her pulse, and nearly fell over when a sticky hand grabbed her arm.

Neral’s eyes opened, bright with fever. "Dagan… drone. Got to warn. My sisters. How?"

"Wasn’t supposed to. Never expected. To get out." Neral laughed, short and horrifying, a thick wetness in her voice. " Will now."

Neral grabbed desperately at Karin’s arms. "They’ll be coming after you now. They’ll all be coming for you. Tell my sister—"

"You can tell her yourself," Karin said. "I’m going to lift you now, but it’ll hurt. Brace yourself."

Dagan was on the line with her when the sirens started going off.

"Damn it," he said. "This is far too soon. I thought that thing was thoroughly offline."

"The drone? It was! I checked it over when you brought it onboard."

He switched her view to the security feed. It was powering up weapons.

"I'm getting out of here. You'll probably want to evacuate, too," Dagan said, as her door slid shut and she heard the locks engage. "Shame you won't make it."

Arrogant bastard, she thought, and headed for the ventilation ducts.