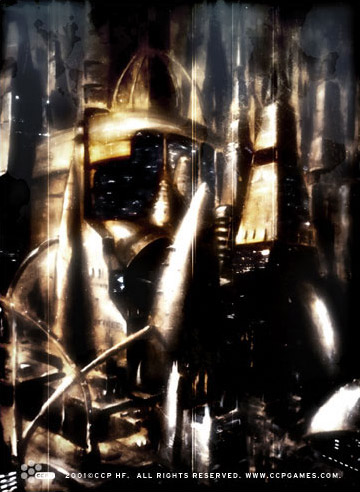 Dam-Torsad - the Imperial City of the Amarr Empire - marked me. It marked me even though I consciously tried to fight its corrupted presence. It is built on memories - nightmares, really - and you can’t stop them from perverting your mind in the end. For fifty long years I’ve struggled to rid myself of those haunted memories, memories of a human society turned sour and bitter.

I may have escaped the oppressive walls of the city, but the vivid memories will always remain. Memories of a city more like a monument than a thriving metropolis; of people saturated with its sluggish nature, their minds weighed down with traditions and customs so strong, so dominant, that it was like their ancestors of a thousand years ago were living their lives through them.

I couldn’t fail to notice - almost immediately - the injustice entrenched in the society. The Holders tread on the Commoners, which in turn tread on the slaves. Talent means nothing; people are judged solely by their social position. The only merits nurtured are backstabbing and back-nagging. The twisted old Holders are deeply envious of zealous young upstarts and find sick pleasure in squashing them. And yet the Commoners look with awe up to the Holders, craving their position and power, but bound still by tradition more sturdy than any iron shackle.

Progress is a term alien to the Amarrians. It’s almost like this huge empire was built on pure coincidence and luck. But once you get to know their intricate system you get the feeling that they’re like this great big beast trudging heedlessly onwards, trampling any opposition. Their advancements are not by leaps and bounds, but rather through deliberate and articulate planning that can span decades, even centuries. Getting caught in the finely woven spider-webs of a Holder can trap more than just you - it can trap your children and your children’s children. Getting out is not a problem. It’s getting out alive that's troublesome.

My years in Dam-Torsad made me loathe and despise the Amarrians. Their society is in so many ways radically different from the Gallentean one. But I also learned never to underestimate the Amarrians. In their own way they’re ruthlessly efficient, and I cannot help but feel in awe of all their accomplishments through the ages.

*Excerpt from the autobiography of Yanou Lautere, First Gallente ambassador to the Amarrians *