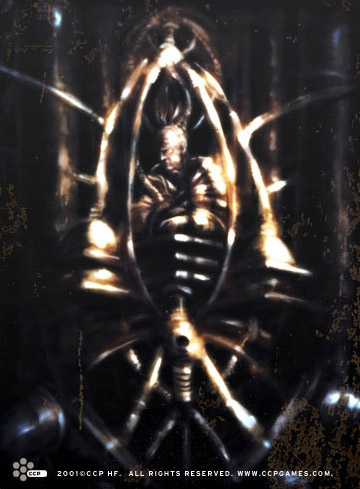 Amarr Emperors can expect to live for at least 500 years through the use of implants and other life-prolonging technology. Since the Amarrians believe royal flesh to be sacred, cloning it is seen as blasphemy and therefore strictly forbidden.

The emperor’s position is not hereditary. When the emperor dies, a new one must be selected from among the Five Heirs. The Five Heirs are the heads of the five royal families (the most powerful families in the Amarr Empire) and descendants of the original members of the Privy Council. The Council was a staunch supporter of the Emperor during the turbulent times known as the Moral Reforms, a struggle between the Emperor and the Council of Apostles which took place 1500 years ago. Since that time, although the Privy Council has today evolved into a fifteen-member council composed of representatives from the Empire’s various non-royal power blocs and institutions, it still represents, at its core, the five royal families vying for the throne.

When the Emperor dies, an elaborate ritual for selecting a new Emperor is put into action. These rituals are performed in strict order and take a few weeks to complete. The rituals are always undergoing modification to better reflect the state of contemporary society and to fix problems encountered in earlier successor bids. The rituals mainly involve various ways in which the Five Heirs prove their loyalty to the Empire and their ability to run it. As should be expected, most of the rituals involve the Heirs directly, though some of them have changed through the ages to allow another person, chosen by the Heir, to perform in his or her place. In recent times, the successful selection of personal champions has been increasingly viewed as one of the strongest indicators of an Heir’s ability and prestige.

One of the most distinctive aspects of the succession process is that once a new Emperor has been chosen, the remaining four Heirs must commit ritual suicide. This is done to minimize the risk of conflict between the new Emperor and the old Privy Council; by removing all the old Heirs and replacing the Privy Council with those next in line within the five royal families, the slate is wiped clean.

Only twice has this tradition been broken since it first came into being more than a millennium ago. The first time was when Emperor Heideran VII of the Kador Family was selected just over 300 years ago. One of the remaining Heirs at the time was a young man named Khanid II, who had only recently become the head of his family. Khanid refused to uphold the ancient tradition and fled the royal court. In the vast regions of his family estate he founded a separate nation and called it the Khanid Kingdom. Needless to say the two states did not start off on good terms, and while their diplomatic history has seen its share of ups and downs, they are on good terms today. A minor new family, the Tash-Murkons, took the place of Khanid’s family in the royal court, and remains one of the five royal families to this day.

The second time the succession tradition was broken was in the year YC 110, when Jamyl Sarum – previously thought dead in the YC 105 ritual where her predecessor, Doriam, became Emperor – ascended to power in an Empire that had been floundering for over a year under the command of a ruthless and self-serving usurper named Dochuta Karsoth. Wielding an immensely powerful weapon of mysterious origin, Sarum stymied a massive invasion of the Minmatar into Amarr space and rode the wave of adulation directly to the Imperial throne, in the process sidestepping completely the traditions of imperial succession.