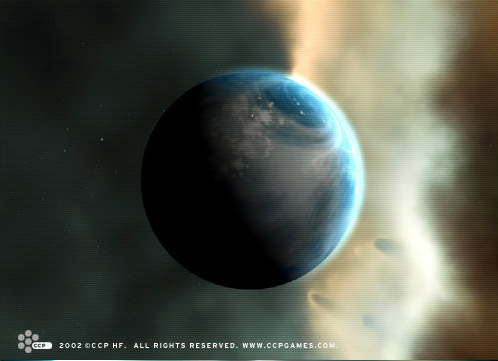 The ship’s sensors kicked in one by one once the ship exited the jump wormhole. Reigou Kiriyki scanned his surroundings with interest, this being his first visit to the Bersyrim system. In fact, none of Kiriyki’s acquaintances had visited this system. Not that it was deserted, far from it: the Bersyrim system lies deep within Amarr space and has two large habitable planets, both teeming with life. No, Bersyrim, as most systems in the Shi-Karid sector, is a restricted area. A visa is needed to enter those systems and acquiring a visa is easier said than done. Kiriyki got his from a contact he knew within the huge Nurtura company and then only because his contact sorely needed someone to ferry vital agricultural machinery to Bersyrim III. As other large Amarrian companies, Nurtura had to depend on foreign traders for much of its trade, even within the Amarr Empire itself. Despite being the largest of the empires their trade fleet was not up to par and Caldari and Gallentean traders poured into the Amarr Empire in growing numbers, in spite of the many trade restrictions. Kiriyki set his course for Bersyrim III.

Bersyrim III, like the other inhabited planet Odra, was among the largest exporters of agricultural products in the whole Amarr Empire and Kiriyki was excited to get the change to do business there. Getting the visa not only presented additional business opportunities, but also gave his career in Jaasinen Inc. a big boost, now that he alone of all the corporation’s members was able to travel to this restricted part of the Amarr Empire. Kiriyki had also been instrumental in getting Nurtura to buy the Caldari-made agricultural machinery in the first place, the very same machinery he was now carrying in his cargo hold to its final destination on Bersyrim III. Kiriyki dreamed of being made head of the Amarr trading branch. He had spent years gaining the trust of the Amarrians and building up a network of contacts and felt the time had come for some recognition for his efforts.

Kiriyki forced himself to start thinking about his current assignment, the future would take care of his endorsements. Right now the priority was to get the cargo safe and sound to Bersyrim III, collect the reward for a mission accomplished and then maybe he would engage in some trading on his own. Certainly, agricultural products were definitely cheaper here at their source than almost anywhere else and as long as he was willing to carry them around for awhile Kiriyki could make a killer deal here. No wonder the visas leading to the Amarr agricultural planets were regarded as gateways to fabulous riches.

While traveling here Kiriyki had made an effort to get as much information as he could on the Bersyrim system. He prided himself in being very thorough when it came to places and people connected to his business.

Bersyrim was an old system, colonized more than 500 years ago. It lay in the fief of the Kador-family and was the gem of the sector. Bersyrim III landmass was mainly vast plains, making it ideal for large-scale food production. The planet exported huge amounts of agricultural products each year, but only a handful of its inhabitants had any extra-terrestrial connections; most of the populace lived and bred and died totally oblivious to anything else but their own surroundings. Kiriyki knew that this wasn’t a unique case - it applied to most planetary populations everywhere. After all, the space economy was only a fraction of the planetary economy.

Most of the urban settlements, which were not many, had developed around huge Holder citadels, the cornerstone of imperial control on the planet. The towns were a mish-mash of large stone buildings, tottering wooden huts and raggedy tent-houses, with every nook and cranny chock full of people. Most of the citizens were Ni-Kunni craftsmen, sprinkled with true Amarrian artisans and freed Minmatar slaves. Out on the plains the land was divided between a handful of Amarr Holders, each ruling over a vast estate of up to 100,000 acres or more. The land was worked by slaves, mostly of Minmatar origin, who lived in small villages surrounded in all directions by an ocean of cornfields. All settlements, both the towns and the villages, were heavily fortified to keep the marauding Chikra nomads out. The Chikra people were descendants of a group of the first settlers on the planet that cut themselves off from the other settlers and headed out into the wilderness. They developed a nomadic lifestyle and still roam the planet in small packs, to the annoyance of the Amarrian authorities.

Yet even if Kiriyki, with his extensive experience and deep knowledge of the areas he did business in, he would be the first to admit that he knew only a tiny fraction of the history of the world of EVE. Sure, now he knew plenty about Bersyrim III, but it was only one world of many thousands, each with its own unique history, customs, stories and people.

While browsing the local news channel on Bersyrim III station as his ship was being loaded with newly-purchased products Kiriyki came across a small report about a discovery of a cache of cyber implants floating in space near Odra station but station workers, no doubt the remnants of a stubborn freighter unwilling to yield to pursuing pirates. When Kiriyki read the name of the cyber implants: Double-Edged Hydra Compartmentalizer, his heart missed a beat. No wonder the freighter had been stubborn, these implants were among the rarest and most sought after Amarrian artifacts in the Caldari State. Kiriyki fervently hoped the news was true: a horde of super-rare cyber implants for sale! While he waited impatiently for the loading procedure to finish he noticed his hands shaking. Odra station was just one warp away…