"A Life in Three Acts" 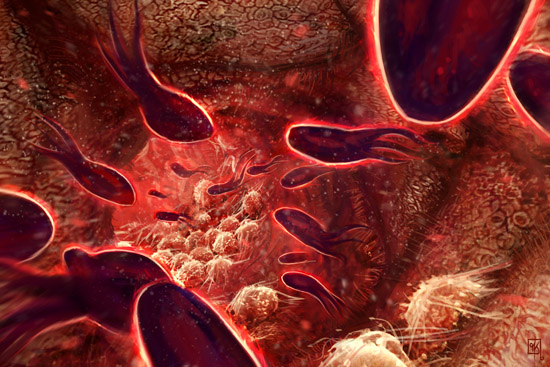 The body rests. The thalamus, deep core and center of all things, resonates with itself at a rate so slow it's barely a murmur. All limbs are still and metabolism is kept to a minimum, with nothing floating through the bloodstream but a few hormones placidly drifting towards breakdown. The heart beats, the lungs inflate and deflate, and everything ticks over as it always has. In a dozen places the skin quivers slightly from nearly imperceptible electrical currents passed through it by the attached monitors.

A foreign substance hovers into the lungs, squeezing past the bronchioles alongside the oxygen and insinuating itself through the capillaries into the bloodstream. Moments later the central nervous system is dampened, and while there's possibly a flicker of activity in the thalamus, the state of rest remains unaltered.

The skin is broken for the first time. Several punctures are created right above the crook of each elbow, and in the skin a finger's breath below the heart. Needles slide in with mechanical accuracy, pierce veins, and begin to pump in chemicals. Several smaller punctures are made along the base of the spine, and a line of very narrow, very long needles slide in at a glacial pace, penetrating the subdural region. These needles pump in a single dose of something that immediately dulls the entire autonomic nervous system, leaving the brain unaware of the changes occurring to it and disinclined to start making a fuss.

The body begins to change. Since the chemicals are initially pumped away from the heart, the first parts affected are the limbs and the less complex internal organs; and, of course, the blood. Regular blood cells begin to die off, their walls eaten up by the intrusive substance while new, more robust ones are pumped out of bone marrow by the millions. These new cells, whose oxygen-carrying capability far exceeds that of the old and dying ones, grow to maturity in a matter of instants. The lungs then kick in, their alveoli adapting to letting in more oxygen than this body has ever been able to assimilate. The muscles swiftly respond, followed by various other organs, gorging themselves on this new red breath.

Once the chemical reaches the brain, change begins in earnest. Sinews strengthen and lengthen without overstretching. Bones are eaten away, their porous, paper-like remains left covered in a sticky residue that seeps into the remaining calcified matter, links and reacts, and eventually hardens into matrix-like structures far stronger than the original material. The heart is less altered, its ventricles merely expanding to deal with the onrush of new blood to a stronger body. It suffers some palpitations, but these even out quickly and the needles do not stop pumping in the chemicals.

The body is being put through extreme rigors. Muscles are tensed and flexed consistently, alternating between upper and lower sections of the skeleton, and reknotting themselves into stronger versions at a pace far beyond any past results. While the heart's rate of growth has remained less than might be expected, lung capacity has increased by leaps and bounds. All other organs remain in line, having picked up the pace much as a child who'd learned to walk and is now reveling in the joy of an endless run.

With this growth come new natural limits that also get tested with a vigor bordering on self-destruction. There is sleep deprivation, and the thalamus that once served its purpose with hushed consistency now regularly gets yanked in and out of REM without mercy, its waves spiking in dull panic. The skin routinely gets shocked with extremes of hot and cold, but the brain is learning to compensate for these differences, blood vessels constricting and expanding with high rapidity. Despite their increased size the new blood cells are more pliable than the older version and manage to get around beneath the outermost layer even when it has restricted and blocked off all outside interference. This is a powerful and resilient system now: locked down, coiled, and waiting.

There is a moment when the body relaxes, going as deep into theta as it consciously can. Some adrenaline still courses through the bloodstream, and various systems are on semi-prepared standby, but the brain orders all to stand down, fall back, and hold position. There is a wait.

A mild electric current passes through the body, its contact point located at the ankles. It causes the leg muscles to tense, jerk and finally convulse, pulling against each other. Every muscle is slowly worked over: The current brings it to its maximum twitching power, its glycogen stores are exhausted and its lactic acid is pumped back into the bloodstream. The lungs work overtime to the point where the visual cortex starts having issues decoding information and the labyrinth in the inner ear fails to maintain a proper sense of balance. Sensing this, the brain - still keeping the thalamus calm and producing delta waves - orders the diaphragm's contractions to ease up. It does so, reluctantly, and general equilibrium is slowly reestablished. The electric current moves up past the calves and the thighs, then separates, one contact sliding up the ventral nervous system and another one going up the lateral. They alternate their efforts over various muscles on either side, and things start to go wrong.

One back muscle, rarely trained, overstretches. In response the body's torso, which has been trained to much higher levels, cramps up and heaves. The effort combines with the current and begins to tear the back muscle apart, its striated cords snapping like the wires of a bridge in a tornado. The adrenal glands go nuts, pumping out adrenaline and other corticosteroids at the highest rate they can. The thalamus, by now used to being pounded into activity, jerks awareness back into action. All conscious control of the lungs is lost and air is expelled at high rates, the vocal cords vibrating so hard that their mucus lining begins to dry. Blood gets pumped into all extremities at twice the normal rate, which only accelerates the body's thrashings and the destruction of the back muscle. The heart, in fact, has an agonizing time keeping up, but its skipped beats are masked from detection by the flood of adrenaline.

The skin gets broken, a vein is pierced and sedatives begin to flood in. The pain stays constant but the system begins to relax involuntarily; cramping slows and finally ceases, brainwaves even out, and the battered adrenal glands return to normal. For a while there is utter stillness. Then a spot on the back, on the skin over the torn muscle, gets covered with something that begins to intrudes. The skin is not broken but permeated, as if water were passing through a wet cloth, and it grows very warm. The muscle also warms up even as the blood drains from it. Its tendrils reach out and hungrily eat a glut of nutrients carried to them by the surrounding cells. They start to intertwine, growing stronger and more pliable, morphing into cords of much greater tenacity.

The skin is uncovered. Very mild electrical pulses are applied to the torso, and the body slowly bends, stretching the back muscle. It stays unbroken, and the dulled brain, awake but unmoving, registers no signs of danger.

Eardrums, until now blessedly free of irritants, receive sounds that quickly dull the alpha waves and bring consciousness back in with speed. The brain becomes fully conscious of its state again, and the body's muscles gently flex and tense. The adrenal glands squirt a little in nervous anticipation, but nothing gets torn. The body is ready.

Later on it will receive a shock in motion that impacts hard enough to test even the matrices of the bones, but they withstand it.

Eventually the body experiences a lift, and a drop, and olfactory senses report that the air smells very different.

Rest comes harder than before and delta waves are barely even present; the body jerks itself into consciousness at the least little irritant, whether on eardrums, nose, or skin. The adrenal glands, in good practice, happily help out each time with generous supplies of corticosteroids, but eventually the brain reins them in.

The temperature shocks prove to have been helpful as the skin is now exposed to higher fluctuations over greater lengths of time than before. The heat doesn't cause damage but does interfere with gastric control, and there are several occasions where the adrenaline, the heat and high activity in the prefrontal cortex cause the stomach to vacate. Eventually the composition of ingested contents alters, lowering slightly in fat and starch and increasing in complex carbohydrates, fiber and various phytochemicals. There is also less alcohol ingestion, and eventually the stomach settles down and remains stable.

Over time the body settles into a groove. Everything goes at its pace, all glands function, and if there is the rarest of half-missed beats from the heart, the rest of the system more than makes up for it.

So when, at last, the eardrums are assaulted and the thalamus shocked out of deep delta waves, and the body is fairly thrown to hands and knees, the shock isn't quite enough to cause any immediate lockup. The eardrums keep taking in and filtering everything they can, while both visual cortex and motor control narrow their focus, accomplishing in linear order several tasks that are so practiced they have long since been ingrained in the subconscious. The body rises and begins to run, the hands slightly tensed to hold their deadly baggage, the skin on the fingers cooling from steely contact. Now the visual cortex takes over, the head craning back and forth while the legs piston and the lungs work, and every now and then the body will stop, crouch, process visuals and react through hand movements, either a wave or a slight pull of a finger.

It is during the exit from one such crouch that the eardrums process a loud whine, and immediately after the skin is massively broken, not merely torn but shredded off, veins pieced and muscles taken off in chunks. The abdominals contract with all the power they can muster, and air is forced out of the lungs, the vocal cords vibrating at high frequencies. All systems go independent; legs give out, hands cramp up and eardrums vibrate with a merciless rat-tat-tat; bladder goes into overdrive and so does adrenal gland, pumping like there's no tomorrow. Adrenaline courses through the system at unprecedented rates, while the blood cells, engorged with oxygen, deliver it to whatever extremities they can before flowing through the broken skin and out into the unknown; and in all these imbalances and all this stress the heart, having ticked away in duty and stress forever until this very moment, at last loses its grip: cramps up, goes on strike, stops. The body convulses, eyes rolling around in their sockets, and in those last shooting moments of pain and confusion there is just enough time for the brain to realize it has been cut off from the flow, and for the eardrums to process one last noise fast approaching, before the body is crushed, cut and burned by a force far greater than it has ever experienced, and even the matrices of its bones give out at last, their cracks the final sounds before the quiet, definite and final onfall of death.